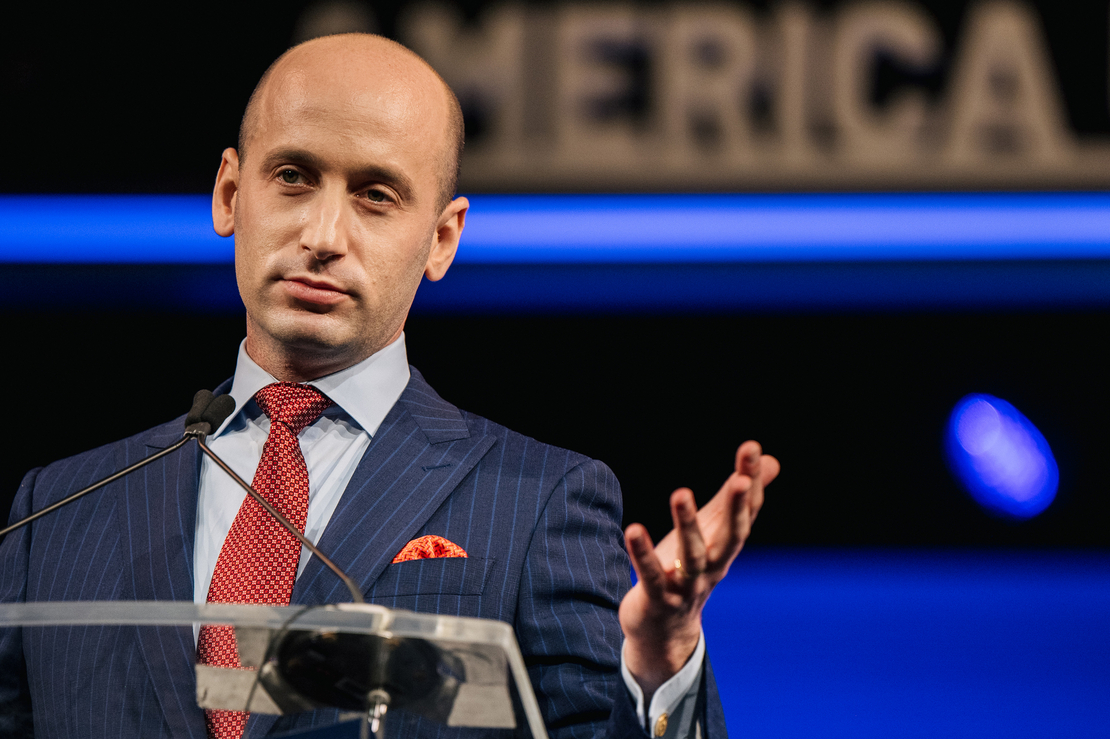 Stephen Miller, former senior adviser and director of speechwriting for the Trump White House, speaks during the Conservative Political Action Conference held at the Hilton Anatole on July 11, 2021, in Dallas. Brandon Bell/Getty Images

Former Trump administration aide Stephen Miller is on the minds of Biden White House staffers as they work to channel federal investments toward disadvantaged communities.

“His name has been invoked” by White House officials as they consider whether to explicitly consider race in a tool that’s aimed at advancing environmental justice, said an administration official familiar with the conversations. That’s because Miller and his legal group successfully challenged a Biden program that intended to aid farmers of color, arguing that it discriminated against white farmers.

Miller and the threat of litigation he represents have “people spooked,” the Biden administration official added.

The former White House aide comes up in private discussions about an ongoing effort by the Council on Environmental Quality to prioritize historically underserved communities when the government is doling out climate and clean energy funding. The Biden administration is attempting to walk a fine line: They want to ensure that policies aid minority groups, but they also want to avoid legal pitfalls that could come by explicitly citing race as a factor for distributing federal cash.

CEQ officials have repeatedly stressed that they want the new policy to hold up in court. And legal experts say the threat of challenges from groups like Miller’s — as well as a Supreme Court that’s viewed as unwelcoming to race-based policies — are likely factors in the Biden administration’s reluctance to exclude race from its environmental justice screening tool.

“We live in this world where if you don’t like government policy, you find a judge, and there are plenty of judges who are not sympathetic to race-conscious programs,” said Neal Devins, a professor at William & Mary Law School. “I think there’s an awareness by the Biden administration that they’re going to have to defend it in court, and it’s much easier to defend a race-neutral program.”

Cecilia Martinez, who was the agency’s top environmental justice official until she stepped down in January, told E&E News in an interview that “surviving legal scrutiny should always be an important consideration in any executive branch policy or program.”

She added, “Obviously we wanted to develop the screening tool so that it would capture the needs and the conditions of racial groups, utilizing the best science and policy, and with extensive input from the diverse community groups that make up this nation.”

A thorn in Biden’s side

In a big victory for the group, a federal judge last summer blocked a Biden administration plan to distribute $4 billion in aid to farmers of color after Miller’s group argued that it would discriminate against white farmers. The Biden Justice Department declined to appeal the judge’s order in that case.

Miller took a victory lap, declaring in a statement that “Biden’s own DOJ knows that Biden’s scheme to exclude farmers from debt relief based on their skin color is a legal calamity.”

America First Legal is casting a wide net in its onslaught against Biden’s approach to racial equity.

The group announced last month that it sent Freedom of Information Act requests to “nearly every agency” — including the Interior Department, the EPA and the Energy Department — asking for details about the plans to comply with a Biden order that each agency develop a strategy to combat racial inequity.

“Equity is government sponsored and directed racism,” Miller said in a statement. “America First Legal is proud to serve as the tip of the legal spear [battling] these unconscionable and unconstitutional policies.”

America First Legal did not respond to requests for comment for this story.

Miller’s group and the cases involving minority farmers are just a few of the factors legal experts say the Biden administration is considering as it weighs how aggressively to use race as a factor in a broad range of issues, including its environmental justice screening tool.

On top of setbacks in cases challenging debt relief to Black and other minority farmers, courts dealt the administration another blow by striking down a policy that prioritized applicants for restaurant relief funds based on race and gender.

The conservative majority of the U.S. Supreme Court also signaled a willingness to reconsider the use of race-based college admissions when it agreed to hear cases challenging the affirmative action policies at Harvard University and the University of North Carolina later this term.

Asked about the role that potential lawsuits played in CEQ’s decision to avoid using race explicitly in its screening tool, a CEQ spokesperson said, “Without question, race and racism are factors that have contributed to where pollution has been concentrated in this country and in determining which communities have been left behind by government investment, enforcement, and help.

“The environmental and socioeconomic data we are using in the tool endeavor to reflect this reality and legacy of injustice,” the spokesperson said, adding that the agency launched a draft version of the tool so it could solicit feedback from the public.

The administration is responding to “discrimination that has ongoing ramifications in communities of color across this country” but has to do so in some courts that are “hostile to mentioning the fact that people have a race,” she said.

David Muraskin, a lawyer with Public Justice, said of the legal setbacks to Biden’s race-based policies: “I can see why it’s a deterrent at a 30,000-foot level,” but there “are plenty of ways to defend uses of race in the law that the administration is choosing not to take.”

He added, “This is a Biden excuse story as far as I can tell.”