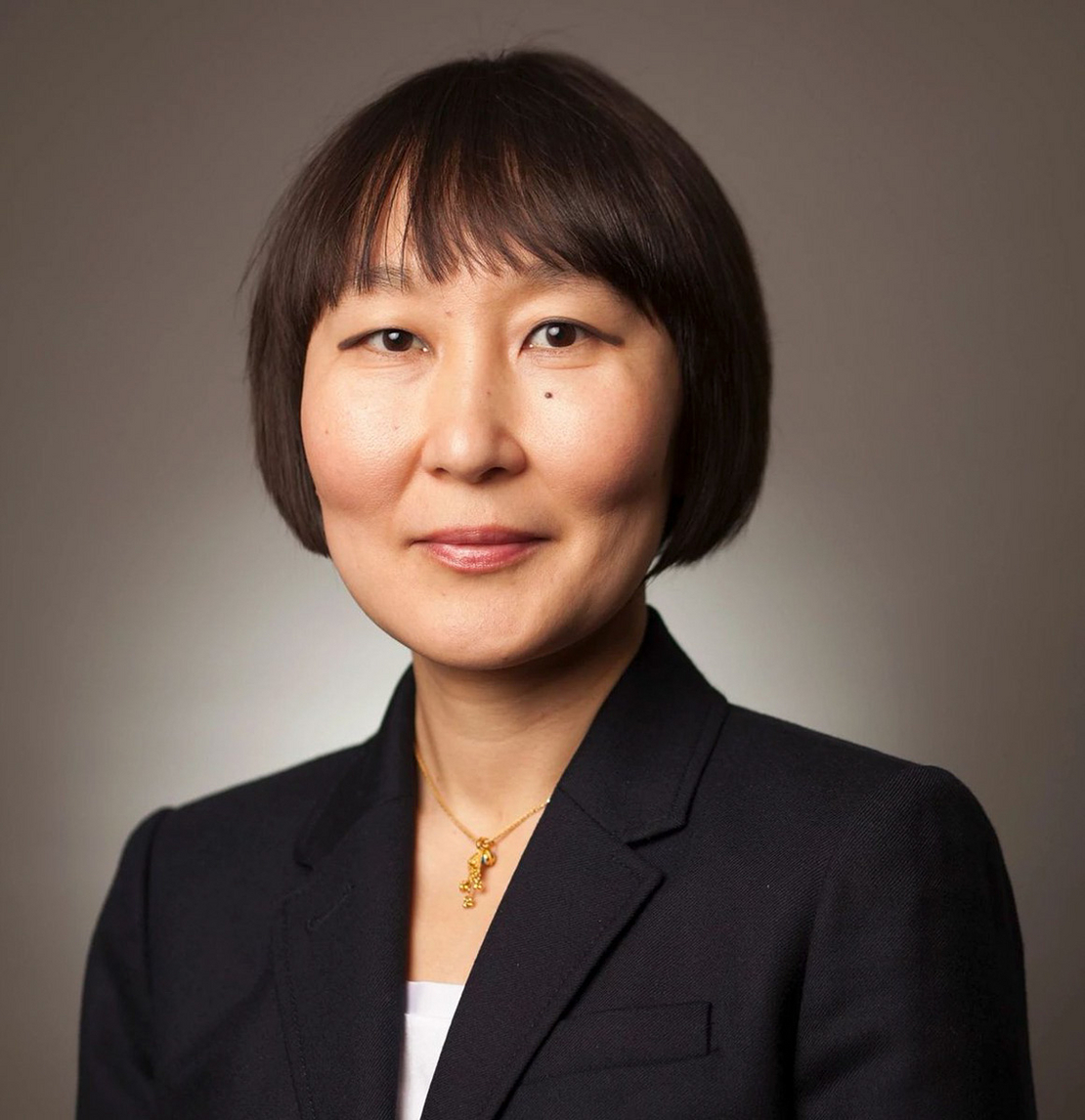 Saule Omarova was nominated by President Biden to lead the Office of the Comptroller of the Currency. @CornellLaw/Twitter

A little-known bureau inside the Treasury Department has become the latest flashpoint in the debate over how to best safeguard the U.S. financial system from future risk, including climate change.

The battle over the bureau — known officially as the Office of the Comptroller of the Currency — began last month when President Biden nominated Saule Omarova, a well-known Wall Street critic, to lead the agency.

Omarova, a Cornell University law professor since 2014, has warned of the long-term financial risk of fossil fuel companies. She also has called for a new federal authority to invest in projects that would support “socially inclusive and sustainable economic growth,” according to a paper she wrote last year.

Several elements of Omarova’s approach to financial regulation have elicited a sharp reaction from some corners. Republican lawmakers and industry groups say Omarova has championed “radical” policy ideas that would fundamentally — and dangerously — overhaul the banking system. Many oppose her nomination.

The stakes are significant. The Office of the Comptroller of the Currency polices the U.S. banking system and helps ensure the largest U.S. banks are operating in a “safe and sound manner.” That responsibility takes a number of forms. Among them: supervising the largest lenders to ensure they’re actively addressing emerging threats to the financial sector.

Right now, it’s unclear whether the closely divided Senate will consent to Omarova’s new role as chief of the Office of the Comptroller of the Currency. But one expert said Omarova’s approach is well-suited to the position.

“So I expect her to be very attuned to any threat to the financial system as a whole,” Allen added, “and I think climate change is one of them.

So what exactly is the Office of the Comptroller of the Currency? And what does it have to do with global warming?

Established in the mid-1800s, the agency is an independent bureau of the Treasury Department that — together with the Federal Reserve and the Federal Deposit Insurance Corp. — is charged with overseeing the U.S. banking sector.

“The OCC has the slice of the industry that comprises national banks and federal savings associations that have their charters — their license to operate — granted by the federal government,” said Karen Solomon, a former senior official at the Office of the Comptroller of the Currency and current senior of counsel at Covington & Burling LLP, a law firm.

Fulfilling that role entails carrying out a range of regulatory activities, many of which take place in coordination with the Fed and FDIC, as well as international standard setters.

They include bank supervision, regulating lending portfolios and helping administer stress tests that gauge firms’ ability to stay afloat amid unanticipated economic shocks. Also critical is the agency’s role in identifying and developing policies to ensure banks have enough capital on hand to shield them from losses that could stem from emerging risks.

Many of those activities, a growing coalition of advocates and experts say, could and eventually should account for climate-related risks such as extreme weather events and the transition away from fossil-based energy.

Just last week, advocates called on agencies including the Office of the Comptroller of the Currency to immediately “incorporate climate risk” into their regular examinations of firms.

A critical first step, said groups including the Natural Resources Defense Council and Public Citizen, would be to issue “supervisory guidance detailing specific issues that banks and your examiners will be expected” to consider.

“What supervision essentially is, is examiners going in — in a confidential manner — reviewing the papers of a bank, their policies and procedures as well as looking at their loan portfolios, to make sure that the bank is being operated in a safe and sound manner,” said Yevgeny Shrago, a policy counsel with Public Citizen’s climate program.

If “you think that climate change is a risk to bank operations, either through physical risk or transition risk,” Shrago added, “then it’s important that the examiners be looking to understand how the bank is dealing” with those issues.

Notably, the Office of the Comptroller of the Currency already is moving in that direction.

Acting Comptroller Michael Hsu said in a speech last month that the bureau under his leadership is “focused on developing effective climate risk management guidance for large banks, working with our interagency peers.”

Solomon, the former OCC official, said that when it comes to climate-related financial regulation there’s little question where the agencies are headed given the growing focus on the issue within the Office of the Comptroller of the Currency, in the United States and around the world.

“On the climate issue,” Solomon said, “it seems to me that whether Acting Comptroller Hsu remains in place or Professor Omarova is confirmed, OCC leadership would want to further a climate change policy as articulated by the [Biden] administration.”

Even so, Solomon emphasized, “who is in what chair matters a great deal.”

It’s hard to say for certain where Omarova stands on specific policy ideas to guard the banking sector against climate-related risks. “She’s never been climate-focused in her work,” said Robert Hockett, a Cornell University law professor who’s worked closely with Omarova for much of the past decade.

Omarova has weighed in on the issue in some ways. Last year, for instance, she wrote a paper arguing that Congress should establish a National Investment Authority to implement a long-term economic development strategy. The NIA would aim to “fill the institutional gap” between the Treasury Department and Federal Reserve to infuse dollars into projects — climate-related among them — that lack funding.

And in 2020, when Wells Fargo & Co. and JPMorgan Chase & Co. suffered major losses due in part to failed loans to struggling fossil energy companies amid the early months of the COVID-19 pandemic, Omarova said in an interview with E&E News that the losses “crystalize” the long-term risks posed by oil, gas and pipeline industries (Climatewire, July 17, 2020).

Even so, Omarova hasn’t made clear her stance on issues such as climate-related bank supervision, stress testing and the like.

That doesn’t seem to bother finance-focused environmentalists — who cite her time at Cornell, her former roles as a special adviser in President George W. Bush’s Treasury Department and tenure at the law firm Davis Polk as evidence she is highly qualified for the role. The Sierra Club and Evergreen Action were among those who welcomed Biden’s pick, and urged the Senate to confirm Omarova as soon as possible.

“The Comptroller of the Currency has an essential role to play in preventing a climate-fueled economic disaster from taking down our entire financial system,” Jamal Raad, Evergreen Action’s executive director, said in a statement. “With the nomination of Saule Omarova, President Biden has chosen someone who isn’t afraid to take on Wall Street and has supported bold, federal clean energy investments on climate.”

Republican lawmakers and industry groups, however, have raised concerns. The Chamber of Commerce, the American Bankers Association, the Independent Community Bankers of America and Sen. Pat Toomey (R-Pa.) — who chairs the committee that will vet Omarova’s nomination — have critiqued various ideas Omarova has put forth in previous academic papers.

“Ms. Omarova has called for ‘radically reshaping the basic architecture and dynamics of modern finance’ including nationalizing retail banking and having the Federal Reserve allocate credit,” Toomey said in a statement. “She has also advocated for ‘effectively end[ing] banking as we know it.’”

The Chamber took a similar tone. The trade group said in a statement that it “strongly opposes” Omarova’s nomination because her “academic writings are outside the mainstream of either major political party and, if implemented, would lead to a near complete government takeover of banking.”

Neither ABA nor the Bank Policy Institute responded on the record to questions about their stance on Omarova, or climate-related regulation more broadly.

Omarova’s supporters have pushed back on the argument. They say the articles that Omarova’s critics reference were academic thought experiments — not serious policy proposals that shed light on how Omarova would approach her work at the Office of the Comptroller of the Currency.

Further, those ideas are “actually unrelated to the OCC’s mission,” said Allen, the American University professor. “So I think this has sort of been seized upon as a canard to disguise the fact that the real concern about her is that she’s going to be tough on banks and make sure that the financial system stays safe and sound.”

Allen said that approach would mark a significant departure from the bureau’s “clientelist history” of “expanding bank activities” and “serving banks as clients.”

Hockett, who has co-authored many of Omarova’s papers, agreed. He said he thinks the industry is worried about Omarova’s research that highlights the risks that cryptocurrency, financial technology companies and other trends pose to economic stability.

According to the law firm Gibson Dunn, a recurring theme in Omarova’s work is that bank regulation is too narrowly focused on “‘micro’ issues and solutions, and that a new regulatory paradigm centered on overall ‘macro’ economic and public interest goals, and including substantially increased government intervention in the financial sector, may be needed.”

In that way, Hockett said, Omarova’s critics “know that that relevant work of hers is not actually objectionable. It’s just stuff that they don’t like because it shows that she’s in favor of regulating them.”