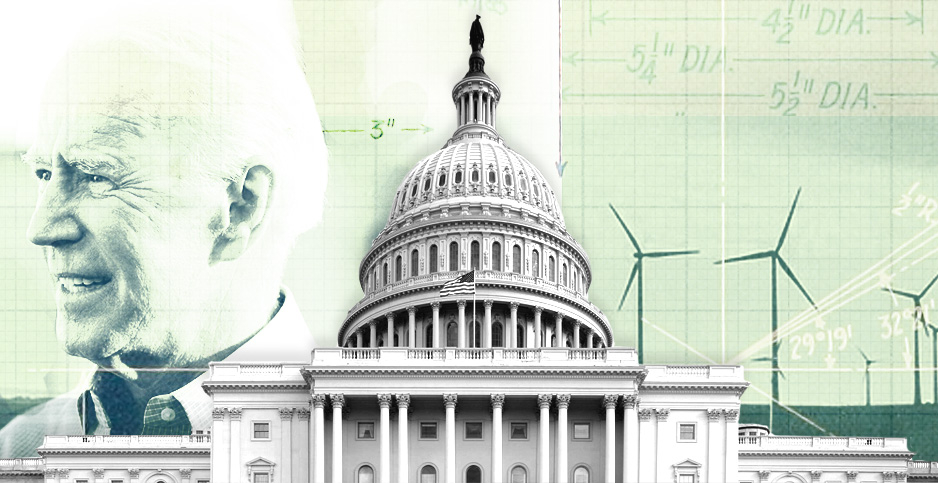 New details are emerging about the Biden administration’s plans for a major redesign of the Energy Department’s clean energy programs, refiring debates about the federal government’s proper role as an engine of new technologies.

In its fiscal 2022 budget justification released alongside White House documents, DOE fleshes out how it would spend $8 billion on clean energy research ranging from methane leak analysis on pipelines to carbon removal technologies. The documents, for example, outline a new natural gas hydrogen research program within the fossil office and a new appropriations line item to support the domestic supply chain for critical minerals, which are considered pivotal for electric vehicles.

New funding for clean energy innovation would flow into a reshaped organizational chart, with new offices cropping up and others renamed to suit their shifting focus.

A new entity, known as the Office of Clean Energy Demonstrations, would become the new hub for scaling up "near- and mid-term" clean energy technology. It would make awards for multiyear demonstration projects in conjunction with private-sector partners, commencing with a commercial-scale demonstration for energy storage. Under the Biden administration’s plan, $400 million would go to the new office in its first year of existence.

Another Energy Department office that has long worked on "enhancing" the use of fossil fuels would halt work on that and turn instead to carbon capture and removal technologies, as well as curbing emissions of methane, a climate-warming gas. The office’s work would target President Biden’s goal of 100% clean electricity by 2035.

The department’s activities would also have a stronger emphasis on demonstrating new technologies and promoting their commercial use.

Getting inventions beyond the so-called valley of death — the extended period of demonstration and financing that energy technologies often need to enter widespread use — has been a problem for years, and innovation advocates have long urged the federal government to step in.

"This is a piece of the innovation puzzle that’s been lacking in the U.S., mostly, for the last 10 years, so I think it’s a really positive step," said David Hart, a senior fellow at the Information Technology and Innovation Foundation.

Whether the budget proposal’s designs run aground in Congress may be another story. Free-market conservatives in the Trump administration sought, throughout the last presidency, to eliminate key offices for clean energy, setting up a test with more pro-innovation Republicans in Congress.

Biden’s signature idea for a climate-technology innovation agency, known as the Advanced Research Projects Agency-Climate, or ARPA-C, has already gotten scrutiny from some Republicans, for example. Many conservatives have said DOE should focus on basic research and not meddle in energy markets.

But Ernest Moniz, a former Energy secretary under President Obama, lauded the budget proposal’s ramped-up research and development for nuclear energy, carbon capture and other clean tech in an interview with E&E News, adding that he thought the plan could be a way to bridge political differences.

Asked about the outlook in Congress, Moniz said, "I’ve always felt that there is a significant degree of bipartisan support for the innovation agenda. I think that will largely be the case this time. There’s a good chance of this moving forward in Congress."

"There will be, as usual, contention of the energy efficiency and renewables budgets," he said.

But the votes on energy R&D could provide an example of "what passes for bipartisanship" in Congress currently, Moniz said.

Since its appearance in a Biden campaign document last year, the idea of ARPA-C has been through some significant workshopping.

The original proposal said the agency would develop eight "game-changing technologies," like small modular nuclear reactors and grid-scale energy storage. Most of them are already the subject of ARPA-E research.

The budget request gives a far different picture. Initial programs, it says, would include development of "climate sensors and monitoring for dramatically improved greenhouse gas (GHG) detection"; carbon-neutral agriculture, waste and recycling; and climate-resilient infrastructure like roads and buildings.

While the concept has won praise from many climate advocates, others have expressed some doubts about how the new ARPA-C agency would be designed.

The new agency would act as a kind of freelance innovation researcher, working with at least seven outside departments on developing technologies for adaptation, resilience and emissions reductions from sectors outside of energy, according to the budget justification. An initial $500 million in funds would jump-start work in 2022.

"I like the idea," said Hart. Regardless of whether the United States successfully cuts back its emissions, he said, adaptation measures would be necessary. "We know the sea level is going to rise. We ought to be preparing for that," he said.

But, he added, "I’ve always struggled with the idea of an interagency agency. That’s a little confusing. I don’t exactly how that’s going to work."

Under Biden’s plan, ARPA-C and the new Office of Clean Energy Demonstrations would sit alongside the Loan Programs Office, the Energy Department’s existing organ for financing large-scale energy projects.

"Innovative" clean energy projects would see an extra shot of loan authority, according to DOE. The budget proposal asks for an additional $179 million, most of it designed to cover the costs of an additional $1.5 billion in loan guarantees for projects. The program also "will avoid directly subsidizing fossil fuels by excluding traditional fossil projects from consideration for a loan guarantee," the DOE document said.

DOE’s existing ARPA-E, which survived four years of the Trump administration’s ax-wielding, also would get a cash infusion. The president’s budget proposal requests a $500 million commitment, or a 17% increase over this year’s funding levels.

Across projects, the budget request says, the agency would have "a growing focus on additional scale-up of the most promising projects."

The innovation plans are part of an administration push to establish American "preeminence" in inventing and commercializing new technologies that could pare back the country’s carbon dioxide emissions to net zero by 2050, according to the budget proposal’s overview.

Granholm said the budget blueprint would put the country "in the driver’s seat as we transition towards a 100% clean energy economy."

"These investments will ensure the U.S. is the global leader in research, development and deployment of critical energy technologies to combat the climate crisis, create good-paying union jobs and strengthen our communities in all pockets of America," she said.

With the administration putting an emphasis on decarbonizing buildings — which account for about 40% of the total energy use in the United States — the budget proposal calls for major boosts to energy efficiency and weatherization programs that the Trump administration tried to eliminate.

Even small DOE offices that support clean energy would get significant increases. Within the Office of Energy Efficiency and Renewable Energy, the budget request calls for a nearly 1,000% increase in funding for the Federal Energy Management Program, which helps federal agencies meet energy- and water-reduction requirements and goals.

Under Biden’s proposal, the program’s budget would grow from $40 million to $438 million.

The proposed increase comes as the administration has put an emphasis on reducing the carbon footprint of buildings.

State energy weatherization and efficiency incentives that the Trump administration sought to eliminate would see a nearly 500% boost to $300 million from $63 million.

Those efforts have been popular with Congress, and DOE’s Oak Ridge National Laboratory has estimated that the program saves consumers millions of dollars, while some conservatives have called it a "failure."

Biden’s budget request also calls for $21 million to create a new Weatherization Readiness Fund, saying it would "enable more low-income Americans to receive weatherization assistance by providing funds to address structural and health and safety issues to reduce the frequency of deferred homes that are not weatherization ready when [Weatherization Assistance Program] work crews enter the home to perform retrofit services."

And it calls for $25 million to establish a new Local Government Clean Energy Workforce Program that would provide competitive awards and technical assistance to support the development and deployment of clean energy programs at the local and tribal levels, with a focus on communities with energy facilities or on disadvantaged and small to medium-size jurisdictions.

Under the proposed budget, the renamed Office of Fossil Energy and Carbon Management would receive $890 million and would focus on "climate-centric activities" instead of "traditional fossil combustion-centric activities."

Brad Crabtree, director of the Carbon Capture Coalition, said the administration’s budget request and other proposals continue to "demonstrate its commitment to carbon management as a key component of a national strategy to reach net-zero emissions."

"Together with similar measures in bipartisan legislation before Congress, the President’s budget announcement further underscores the unprecedented bipartisan common ground and growing support for a broader and more complete portfolio of federal carbon capture policies that are essential to meeting midcentury climate goals," Crabtree said in a statement yesterday.

Multiple programs within the fossil office are slated for upticks in funding.

For example, the budget proposal calls for a 65% increase in the Carbon Utilization Program, up from $23 million to $38 million. The program backs "early-stage CO2 utilization technologies" that aim to create more markets for carbon dioxide-based products, DOE said.

The Carbon Storage Program also would grow by 48%, from $79 million to $117 million. The program takes up the "performance challenges of operating and monitoring" commercial-scale sites for storing CO2 and is looking to enhance storage and operational efficiency.

"Achieving each of these elements is critical for enabling a [carbon capture, utilization and storage] industry that is safe, economically viable, and environmentally benign," according to DOE’s budget justification.

As the administration seeks to crack down on emissions of methane — a potent greenhouse gas and the main component of natural gas — it is also ramping up funding for the Office of Fossil Energy and Carbon Management’s natural gas technologies program, which focuses on issues associated with the natural gas production and transportation.

In the proposed budget, funding for the program would increase 128% from $57 million to $117 million. The division includes the development of technologies that detect, locate, measure and reduce methane emissions from a host of sources, including transmission, distribution and storage facilities.

"This includes the development and validation of measurement sensor technologies for the collection, dissemination, and analysis of emissions data which will inform efforts such as the Environmental Protection Agency’s … Greenhouse Gas Inventory and orphan well remediation programs," DOE said.

Renamed as the Advanced Energy and Hydrogen Systems program, the division is slated to see a 24% decrease in funding, down $108 million to $82 million.

In fiscal 2022, that program won’t fund research and development "specific to traditional fossil power generation, but rather, will narrow the focus to work on hydrogen-fueled turbines, fuel cells, [carbon capture, use and storage]-relevant technologies, and production of clean hydrogen through gasification," DOE said.

The budget request said funding for gasification systems to enable hydrogen production would rise by $29 million, or 153%, to $48 million, and that decreases would include areas that are focused on fossil fuel promotion.