Biden’s climate order moves the spotlight away from EPA 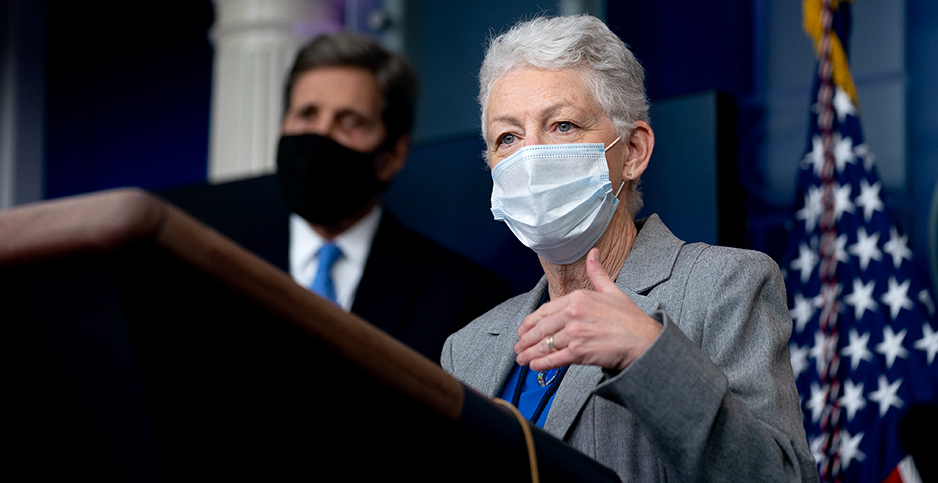 The agency that oversaw the overwhelming majority of President Obama’s carbon mitigation policies was given a seat — with 20 others — on a new interagency task force on climate change headed by White House domestic climate adviser Gina McCarthy, EPA’s leader during the Obama administration. EPA will also participate in an interagency council and administer and fund an advisory committee on environmental justice — a cornerstone of Biden’s environmental and climate platform.

But Wednesday’s directive didn’t give any new details about when or how EPA might carry out flagship climate rulemakings, like an expected replacement for the Trump-era Affordable Clean Energy rule for existing power plants or any new greenhouse gas standards for sectors like refining and manufacturing. Instead, the order centered on a moratorium on new leasing for fossil fuel production on federal lands and efforts to elevate climate change as a national security and foreign policy issue.

But climate policy experts say that wasn’t a snub for EPA, or particularly surprising.

"It’s hard to characterize what EPA does in a paragraph, the way they did everything else in the E.O.," noted John Coequyt, director of federal and international climate campaigns at the Sierra Club. "But I will tell you that that didn’t raise a lot of red flags over here."

For one thing, the Biden administration has already said about as much as it can for now about how it plans to proceed on EPA regulation.

In the early morning hours of Jan. 20, as the president-elect was preparing to take the oath of office, his team circulated a list of Trump-era regulatory actions slated for review at several agencies.

EPA’s list was the longest at 48 rules, spanning issues like air quality, greenhouse gases and water. Among those slated for review was the ACE rule, which replaced a more stringent Obama-era standard and which a federal court decision had just invalidated the day before. Taken together, the list affords EPA the opportunity to make extensive greenhouse gas reductions both directly and indirectly, by shuttering coal facilities.

Then, hours after Biden’s inauguration, his White House released his "day one" executive order, which listed four sets of environmental regulations to be proposed on an expedited basis later this year.

These included replacements for standards for vehicle efficiency and new oil and gas infrastructure, both of which were rewritten under President Trump to cut out direct greenhouse gas regulation.

The "day one" package also committed EPA to propose by September a first-of-its-kind rule to limit methane across today’s oil and gas supply chain.

Those rules would be an early down payment on Biden’s climate objectives, which include a commitment to U.S. carbon neutrality by 2050. But they were likely chosen to move first because they rely on a regulatory playbook that was honed under Obama and, in the case of the methane rules, on a set of compliance technologies that have only expanded during the Trump years and are common for both existing and future infrastructure.

A rule for existing fossil fuel power plants, for example, could be trickier. Biden has pledged to decarbonize the nation’s power grid by 2035. But while a power plant carbon rule could help, EPA must still weigh how to structure it— especially given Trump’s legacy of a conservative Supreme Court majority.

It’s likely to take more than one rulemaking, and more than just regulations, experts say.

EPA "could decide to run a standard like the Clean Power Plan that achieves the target, but there’s a lot of judicial risk that would come with that," said Coequyt, referring to Biden’s 2035 goal. "Completely changing our electric grid to be carbon-free is a very major undertaking, and it’s not going to be done in one administration."

What this week’s executive order does make clear is that McCarthy’s interagency task force faces a tight deadline of just over 80 days to craft and submit a new U.S. commitment to the Paris Agreement ahead of Biden’s high-level climate summit on Earth Day.

The nationally determined contribution to Paris, or NDC, would present the U.S. pledge of emissions reductions and adaptation for 2030 and would follow the Obama administration’s 2025 commitment, which the Trump administration pulled back.

In 2015, the Obama administration promised to cut greenhouse gas emissions between 26% and 28% compared with 2005 levels by 2025. To show how it would begin to deliver, the Obama NDC referenced a litany of the administration’s actions, including several Clean Air Act rules promulgated by EPA — the Clean Power Plan among them.

The Biden administration now faces pressure to finalize a 2030 commitment in the neighborhood of 50%. And it has less of a track record to cite.

But climate experts say that’s all right, because the U.S. commitment to Paris will rely on a more diverse set of actions anyway, including policies of state and local governments and eventual climate legislation.

"The only way we’re going to get an ambitious cut in climate pollution in the U.S. is if we just pull out all the stops," said Nathaniel Keohane, vice president for international climate at the Environmental Defense Fund and a former special assistant to Obama.

That means making the most of authorities Congress has already granted under laws like the Clean Air Act, said Keohane, but also projecting reductions from future legislation, including Biden’s stimulus proposal due out next month.

"And it’s going to mean ultimately, and sooner rather than later, legislation that actually puts enforceable limits on carbon pollution in the power sector and other sectors and gets those emissions down towards where they need to be in 2030," said Keohane.

Coequyt noted that the 2015 NDC, which covered emissions cuts through 2025, set more ambitious targets than were realized under Obama.

"They can figure out a lot in three months, but there’s still going to be a lot of work to do between now and the end of this administration — and beyond," he said.