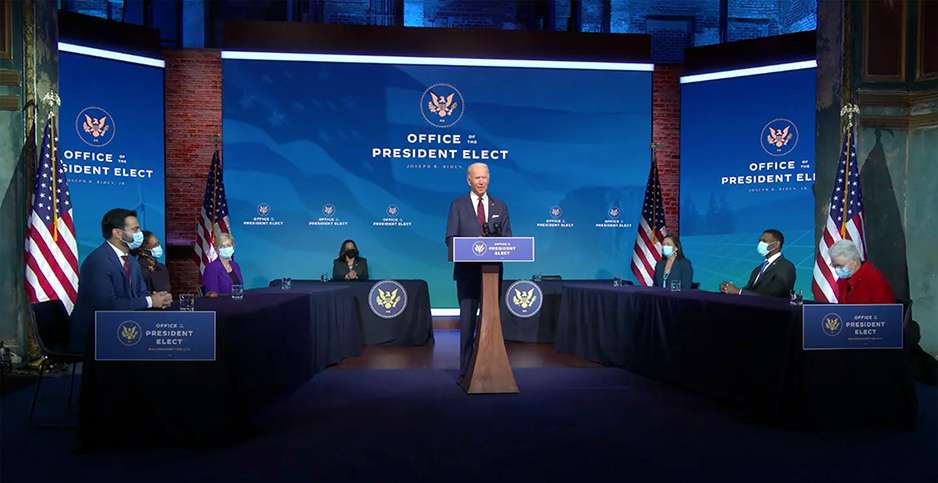 The fight against climate change unified Democrats for the general election, and it’s playing the same role for President-elect Joe Biden’s incoming administration.

Biden finished naming his climate team last week after a contentious month of activist pressure and establishment intervention. Despite those quarrels — or, some say, because of them — the result is a slate of energy and environment appointees who’ve won support from moderates, progressives and even some Republicans.

"Folks are excited and feel like they can work with this team," said Jamal Raad, co-founder of the progressive climate group Evergreen Action.

Progressives see their influence growing after their successful push to install Rep. Deb Haaland (D-N.M.) as Interior secretary-designate. Just as important, they say, were their campaigns to block some adversaries from top jobs.

Nowhere was that more apparent than the climate team.

"It looked like [Biden] was mostly going to lean toward his friends," said Julian Brave Noisecat, vice president for policy and strategy at Data for Progress.

The fact that activists were able to dissuade Biden from picking people in his inner circle, he said, "bodes well for both progressives … and the theory that this is an administration that can be pressured."

At the same time, moderates and some Republicans have been encouraged to see centrists like Agriculture Secretary-designate Tom Vilsack make it onto Biden’s team. Possible Republican control of the Senate has given latitude to Biden — a moderate himself — to eschew left-wing candidates who might have had more trouble winning GOP confirmation votes.

"Those of us who want to see constructive climate policy are fortunate that control of the Senate has been uncertain. Biden has nominated more relatively acceptable candidates than he could have. And there’s a possibility for a fairly constructive confirmation process," said Alex Flint, executive director for the Alliance for Market Solutions and a former Republican Senate staffer.

The team has a climate mandate that could touch on all parts of the federal government, including the Treasury, the economic council and the regulatory agencies tasked with reducing fossil fuel emissions. Biden’s challenge is holding his broad climate coalition together, with the likelihood that he will have a divided Congress when he takes office in a few weeks.

Working in favor of climate action, Raad said, is how hard Biden campaigned on climate change. He was the first Democratic nominee to give a speech tying climate change to ongoing wildfires and climate-fueled disasters. And he didn’t back down against President Trump’s climate attacks in the debates.

"I just fundamentally think that they feel emboldened from the election — that climate was something they ran on and have a mandate to act on. And they’ve brought together a team that’s capable of pushing forward [Biden’s] ambitious climate plans. A lot of folks are excited at that prospect," Raad said.

Others who backed Biden’s campaign are worried that his climate policy may tip too far left and crowd out carbon mitigation strategies with relatively broad support, such as cap-and-trade programs.

Environmental justice groups played a role in torpedoing the nomination of Nichols, the head of the California Air Resources Board, to lead EPA. They cited her work with the state’s cap-and-trade program that allows some polluters to continue operating, albeit at a higher cost.

Some of Biden’s moderate supporters saw a warning sign in the Nichols battle.

The progressive left risks alienating moderate Republicans on climate if it frames the issue through the prism of racial injustice, said Jerry Taylor, president of the Niskanen Center.

He said the attack on Nichols, who had a history of battling the Trump administration over climate regulations, could come back to haunt advocates hoping to get more substantive legislation through Congress. He said he was concerned that the incoming Biden administration was taking carbon pricing out of its arsenal when it is a policy tool that has been shown to be effective and that can win over some climate-minded moderate Republicans.

"The idea that environmental justice is the price we pay for carbon pricing is just nonsense, it’s not true," Taylor said. "It bodes ill if using market-oriented tools to address climate change are immediately subject to progressive left hostility. That doesn’t bode well for the future of this discussion, especially if we’re trying to find some means of gaining bipartisan support."

Biden would be wrong to write off all Republicans when it comes to climate policy, said former Rep. Carlos Curbelo (R-Fla.). He said that during the next Congress there is going to be more willingness to accept climate reality within the party, driven by young supporters, and that party leaders will be under internal pressure to act.

"What I’d like the Biden administration to do is get a little stronger when it comes to climate politics," Curbelo said. "They really do need to identify someone or bring someone in who is going to be responsible for reaching out to Republicans. There’s a growing number of Senate Republicans willing to engage."

Others see value in Biden bringing together a big tent of climate-minded Democrats.

"There’s more alignment between moderates and party elites and activists on the issue of climate change than the daily coverage of the controversy du jour would lead you to believe," Noisecat said.

Jason Walsh, executive director of the BlueGreen Alliance, which unites labor and green groups, said he was encouraged to see the climate focus of Biden’s Cabinet choices such as former Michigan Gov. Jennifer Granholm (D) as Energy secretary. He said he believes she’ll emphasize clean energy job creation and the role of the labor movement.

Biden is well-served by having an ideologically diverse Cabinet trained on climate work because it’ll bring along different constituencies, Walsh said. Any tension on the team will be to its benefit, because members will bring in differing ideas as they work toward better policy and not just pleasing the president’s whims, he added.

"He’s going to have a Cabinet and a team of senior staff come at this from different perspectives, and I think that’s a very healthy thing, but at the end of the day they’re working to enact his agenda," Walsh said. "It’s in stark comparison to the sycophants [and] yes men who surround the current president."