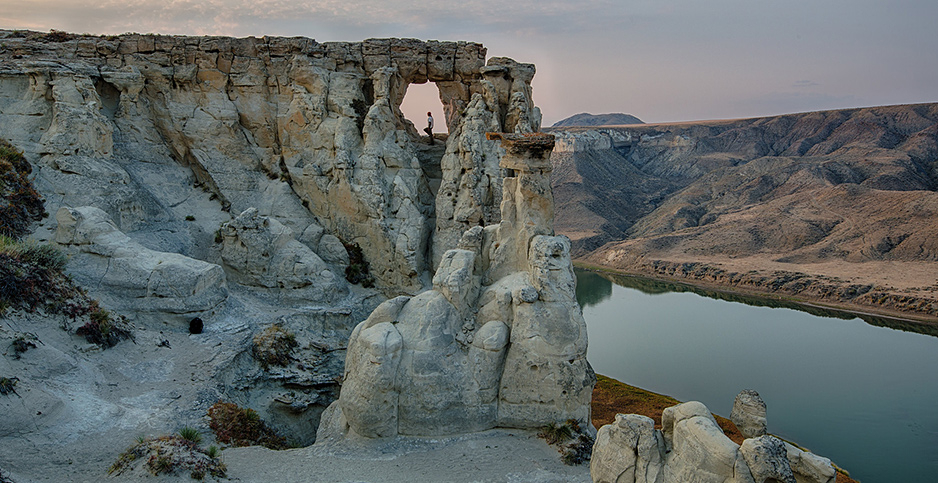 While proponents of dismantling the federal estate have largely halted their efforts in recent years — satisfied by the Trump administration’s rollback of protections on public lands — a bill before Montana state lawmakers this week hints at a movement that could be rekindling.

State Rep. Steve Gunderson, a Republican who represents a northwestern Montana district, wants fellow lawmakers to pass a bill that would prohibit the sale of any federal land granted or transferred to the Treasure State.

On its surface, the single page proposal aims to prevent the state from obtaining public lands and then turning around to sell them off.

"If public lands are truly public, that’s a question you need to ask yourself," Gunderson told fellow lawmakers at a committee hearing earlier this week broadcast on the Legislature’s website.

But opponents of the measure — environmentalists who stopped a nearly identical proposal in 2015 — assert it is actually intended by anti-public land advocates as a first step in breaking apart the nation’s 606.5 million acres of federal lands and putting them under state control.

"We believe this bill is a can of worms that we just don’t want to open," Montana Conservation Voters Political Director Jake Brown told the state House Natural Resources panel.

"Simply put, HB230 provides the illusion of protection, while opening the door for large-scale sale and transfer," Marion said in a statement.

Conservationists remain confident, however, the latest iteration of the bill is likely to fail.

"Time and time again, Montanans rise up and remind how important these public lands are to our way of life," Montana Wilderness Association Deputy Director John Todd told E&E News. "There is typically a bipartisan majority that puts an end to these bad ideas."

Observers outside Montana this week suggested the measure could be the first sign of a resurging anti-public lands movement across the West — where the Bureau of Land Management is responsible for more than 244 million acres of federal lands, across 11 states and Alaska — particularly as President Biden commits to an aggressive conservation platform.

For his part, Todd rejected that idea, even as Republicans now control all facets of Montana’s state government for the first time in 16 years.

"I think we’ll probably start to see folks reacting very differently to this administration and those initiatives," Todd acknowledged. "Whether that results in bad ideas like reducing the federal estate, it’s hard to say this early."

Even Gunderson appeared to acknowledge Monday that it was unlikely the state could take over the federal lands that make up 29% of its total footprint.

"The reality is we’re never going to transfer the whole 25 million acres across the state; it’ll be piecemeal, it’ll be here and there," he said.

As one of his first moves after taking office, Biden committed to a "30 by 30" goal, or setting aside 30% of the nation’s lands and waters in a natural state in the next decade.

This pledge could reinspire efforts from people who believe too much land is already under federal government control, experts said.

"We’re going to see it ramp up," said University of Utah law professor John Ruple, who studies public lands and water resource management. "There’s been disagreement over how to manage public lands going back over 200 years: whether we’re talking about the transfer movement, or the county supremacy movement, or the Sagebrush Rebellion before that, it’s the latest chapter in the same text."

He added: "Things did quiet down over the last four years, but I don’t think that’s because we solved the problem."

Efforts to break up the federal estate surged during the Obama administration, including notable efforts like Utah lawmakers’ approval of plans to sue the federal government for control of lands within their state’s borders. But that spark largely went out after President Trump assumed office (Greenwire, Feb. 27, 2017).

Although a vocal opponent of the sale of federal lands, Trump won approval for rolling back protections on more than 2 million acres of national monument lands in Utah and weakening protections like the National Environmental Policy Act.

"Because Trump was so adamantly anti-transfer, anti-sale, it really tamped down some of this resistance we’ve been seeing out in the Western states," said Whit Fosburgh, president and CEO of the Theodore Roosevelt Conservation Partnership. "It took the conversation off the table."

But Fosburgh suggested that while Congress was once at the center of the push to sell off lands — pointing to 2015 efforts by Alaska Sen. Lisa Murkowski (R) and then-Utah Rep. Rob Bishop (R) to insert language in the federal budget — he doubts a revival on Capitol Hill (E&E Daily, March 17, 2015).

"I think the politics have changed since this movement first started going," Fosburgh said, adding that he anticipates attention to instead turn to state legislatures. "I’m not worried about it on the D.C. side."

Still, Utah Sen. Mike Lee (R) — a critic of federal land management who says on his website that Congress should "sell federal land in Utah or most of the west" — slammed the Biden administration yesterday for reversing the Trump Interior Department’s last-minute revisions to the Land and Water Conservation Fund, including granting veto power to state and local governments on new federal land acquisitions (Greenwire, Feb. 11).

"Since day one, the Biden Admin has been treading on state authority," Lee wrote on his Twitter account, pointing to the administration’s recent freeze of new oil and gas leases on public lands. "Today they rolled back a requirement to get support from affected governors and counties before acquiring land under the LWCF. This is wrong. States MATTER."

A Lee spokesman said the Utah lawmaker has not decided whether to counter the changes through legislation.

"Sen. Lee is assessing the situation as it evolves and will look for legislative opportunities if and when they arise," the spokesman said in an email.

In the meantime, an E&E News review of current legislation across Western states shows at least two proposals that likewise seek to reduce LWCF’s potential impacts. These measures were crafted in the wake of Trump last year signing the Great American Outdoors Act, which guarantees permanent, full funding annually for the LWCF that can be used for federal, state and local land purchases.

A lawmaker in Arizona is once again pushing legislation to block the addition of new federal lands in that state, while one Montana lawmaker is also considering a similar bill.

Republican Arizona state Rep. Mark Finchem (R) — an outspoken critic of what he sees as federal underpayment for the more than 28 million acres of nontaxable public lands in his state — reintroduced a proposal this month that would give the state government veto power over new federal lands (Greenwire, Feb. 21, 2019).

The measure, H.B. 2702, would mandate that the governor and state Legislature approve the transfer of "any Arizona lands" to a federal agency "if the transfer negatively affects state or local property tax rolls."

When he first introduced the measure in 2020, Finchem told the Arizona Daily Star he did so in anticipation of permanent funding for the Land and Water Conservation Fund.

"We can’t afford to have one acre go into federal possession and be off the tax rolls," he said at that time.

But Finchem is now dealing with a different political challenge. The Associated Press reported Monday that state Democrats are seeking to expel Finchem from his House seat for his attendance at the Jan. 6 rally that grew into a riot at the U.S. Capitol.

Finchem has denied wrongdoing, asserting he remained 500 yards from the Capitol and did not participate in the riot.

In Montana, Republican state Sen. Mike Lang has drafted a bill that would likewise mandate the state’s governor and relevant county commissioners sign off on any new water or land acquisitions. The proposal has yet to be introduced.

Other voices in the federal lands transfer movement have quieted in recent years.

The Foundation for Integrated Resource Management (FIRM), which at one time vowed to pursue lawsuits against the federal government on behalf of Utah counties, has "shelved" its operations, chair Stan Summers told E&E News this week.

Summers, chair of the Box Elder County Commission, wrote in an email that he is ill with the COVID-19 virus and unavailable for comment.

The liberal watchdog group Campaign for Accountability last year called for the IRS, Utah Division of Consumer Protection and Utah state auditor to investigate FIRM over allegations it had misused $400,000 in state contracts.

While the American Lands Council has likewise served as a major player in the push for lands transfer, the group appears inactive, with its social media accounts and website largely stagnant since 2019.

Montana Public Service Commissioner Jennifer Fielder, who has led the group since 2016, did not respond to a request for comment.

But the University of Utah’s Ruple suggests that opposition to the Biden administration’s conservation-forward agenda is likely to emerge from another source: "angry individuals."

"You can make a very long list of ways rural communities are suffering, and you can add a sense among some communities that were built and thrived around commodity production or the promise of easy access to natural resources, they feel left behind. They’re afraid of the changes that are coming," Ruple said.

He added: "If you buy this notion that Sagebrush rebels or whoever else are responding to pain and fear, this notion of dramatically expanding the conservation land base — potentially to the detriment of resource-dependent communities — is going to scare the hell out of them."

Ruple suggested the possibility of anti-government actions, pointing as an example to the occupation of the Malheur National Wildlife Refuge in Oregon organized by Ammon and Ryan Bundy in early 2016.

"I’m more concerned about individuals than about state legislatures," Ruple said. "It doesn’t feel that much different than the takeover of the U.S. Capitol. It’s the same disconnect between facts and actions."