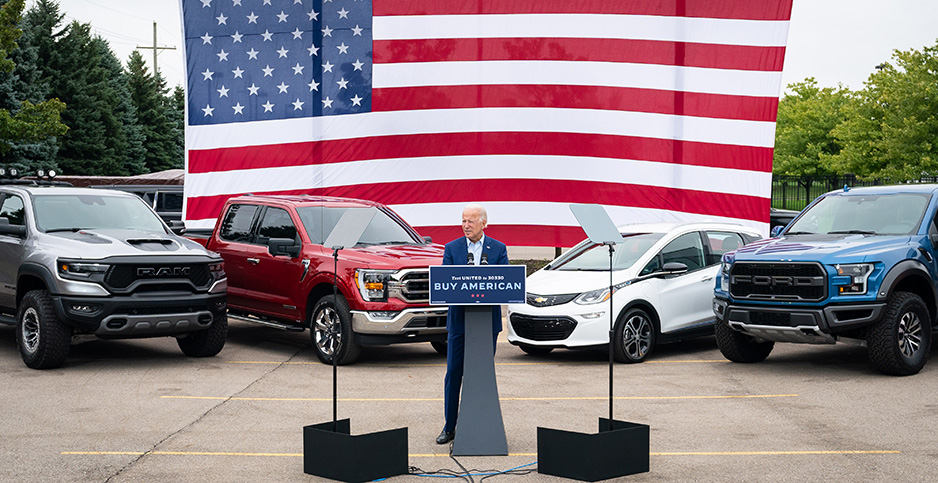 President Biden’s plan to rapidly shift to electric vehicles and renewable energy could find itself in conflict with another, less prominent commitment: improving the sustainability of the mineral and metals sector.

Much of that tension has to do with soaring demand worldwide for the rare earth elements used to make low-carbon goods, as well as the short amount of time the United States has set to reduce its carbon footprint.

"There’s an intrinsic conflict, yes," said Kevin Book, who heads the research team at ClearView Energy Partners LLC. But "there’s got to be a first thing and a second thing, and right now it looks like climate is the first thing," he said.

To cut emissions in half by 2030 from their 2005 level, the United States must transition its top two polluting sectors — power and transportation — toward cleaner low-carbon sources.

That will mean greater demand for the minerals and materials that go into solar panels, EVs and battery storage.

At the same time, the Biden administration says it wants to be a better steward of the mining sector. That includes goals to green mining operations, build sustainable supply chains, and expand recycling of key minerals and metals.

The United States co-founded the Energy Resource Governance Initiative with Australia, Botswana, Canada and Peru. It works with countries to create the "regulatory and governance conditions that will attract investment to their critical energy minerals sector," and reduce emissions and other environmental impacts from mining, a State Department official wrote in an email.

But can it clean up the supply chain in the short time needed?

Observers say it won’t be easy.

"These things do not turn on a dime," said Morgan Bazilian, director of the Payne Institute for Public Policy at the Colorado School of Mines. "Companies have to line up; governments have to regulate … which is not dissimilar to other parts of the economy."

He and his colleagues recently authored a study on how the rapid transition to a low-carbon economy carries the potential for severe environmental and social degradation. They’re also evaluating ways to secure critical mineral supply chains that limit environmental damage and promote good governance.

One way is expanding recycling and reuse of the critical minerals used in batteries, part of the Energy Resource Governance Initiative’s latest focus. Another is expanding exploration — although doing so in a way that doesn’t harm the environment takes more money and attention, Bazilian said.

"One of the key things to making change is to prioritize it," said Bazilian.

But making mineral and metal supply chains sustainable and socially responsible may not rise to the top of the priority list.

"It’s just moving a massive machine in a very short time without everyone’s motivations lined up," he said.

According to the International Energy Agency’s 2020 Global EV Outlook, the material demand for batteries in EVs sold in 2019 was estimated at about 19 kilotons for cobalt, 17 kt for lithium, 22 kt for manganese and 65 kt for nickel.

Under a projected scenario that incorporates existing government policies — where demand for EV batteries increases from 170 gigawatt-hours today to 1.5 terawatt-hours by 2030 — demand for cobalt would expand to about 180 kt per year in 2030, lithium to around 185 kt/year, manganese to 177 kt/year and Class I nickel to 925 kt/year.

If projected demand is in line with the goals of the Paris climate agreement and includes a target where EVs make up 30% of global sales, material demand would more than double.

"As volumes and ranges increase, an appropriate battery value chain is important for ensuring that electric vehicles continue to contribute to sustainability goals," the report says.

In his address to Congress on Wednesday, Biden said the United States needs to "develop and dominate" products and technologies of the future.

That goal is wrapped into another Biden ambition. In addition to his twin aims of rapidly greening U.S. society and improving the mining sector, Biden wants to promote American production and competitiveness.

"There’s simply no reason why the blades for wind turbines can’t be built in Pittsburgh instead of Beijing," he said. "There’s no reason why American workers can’t lead the world in the production of electric vehicles and batteries."

Unfortunately for Biden and the United States, however, there are reasons — at least in the short term. Right now, most of the critical minerals or materials used to produce those products come from China or Congo or other places with checkered human and environmental safety records.

Recent allegations that solar panels from China were made with forced labor underscored concerns about the future of U.S. solar projects (Energywire, April 15).

And that creates a challenge when it comes to timing.

Governance and sustainability issues are going to become increasingly prominent because they create risks for businesses, said Andrew Miller at Benchmark Mineral Intelligence. "And ultimately, that’s just going to double down on the supply pressure that these industries are going to feel," he said.

Recent analysis by the Oslo, Norway-based research firm Rystad Energy found that the mining capacity of lithium — a key ingredient in EVs and grid storage — will not keep pace with expected demand, and the shortfall could see prices for the mineral triple toward the decade’s end (Energywire, April 19).

Of the 35 rare earth elements used in clean energy technologies, the United States depends entirely on imports for 14, and 17 others are at least 50% imported, according to the U.S. Geological Survey.

The Biden administration acknowledged this challenge in an innovation report that the White House Council of Economic Advisers released last week. It called for greater investment in research and development and the infrastructure needed to support the growth of clean energy technologies.

The Department of Energy is reviewing the risks in the supply chain for high-capacity batteries, including those used in EVs. Last month, the Energy Department pledged $30 million toward research to secure the domestic supply chain for critical minerals.

Building out at speed

Ramping up U.S. mining isn’t an easy or fast proposition, however. It can take five to seven years on average to develop and permit a mine, said Miller. That lag creates problems when building out a supply chain at speed.

"It’s not that there isn’t enough of this material out there typically … or it’s geologically scarce," Miller said. But, he said, "the rate of growth that is going to come from these applications over the coming years doesn’t leave much of a lead time for them to develop new projects."

And the good jobs and value creation are in making batteries, not mining the raw materials, said Bazilian.

That raises another obstacle to U.S. goals around job creation and increased domestic production. Even if the sourcing of raw materials is diversified, Miller said, China still controls the intermediary steps in the supply chain.

To break an overreliance on imports, he added, the United States would have to build out the steps in unison, from mining to refining to production. But Miller suggested that it might be better to focus on refining and other parts of the supply chain that can ramp up more quickly.

As for recycling, it’s hard to say when that approach will be broadly available. Technological hurdles stand in the way of making it economically feasible to recycle the materials used in batteries and put them back into the market at a price that is competitive with what can be mined out of the ground, Miller said.

Given the urgency, what’s needed from industry is a greater understanding of the supply chain so companies can determine where they want to invest and then build strong partnerships along it, he said. Some are starting to take notice. The Solar Energy Industries Association yesterday announced its commitment to a sustainable, ethical global solar supply chain and released a buyer’s guide for supply chain traceability.

Jonathan Pershing, an adviser to U.S. climate envoy John Kerry, noted in a webinar that developing supply chains for critical minerals could be a point of common ground between Republicans and Democrats (Climatewire, April 28).

"We tend to think about this as a domestic problem, but we should be clear about where our supply chains come from," he said.

Being clear about that also gets back to the issue of greening and good governance, and the need for widespread buy-in.

"Without other big markets participating in enforcing similar standards, there’s essentially no net benefit," said Book from ClearView. "The United States loses the ability to green up, and the underlying problems go unresolved because the market finds another buyer."