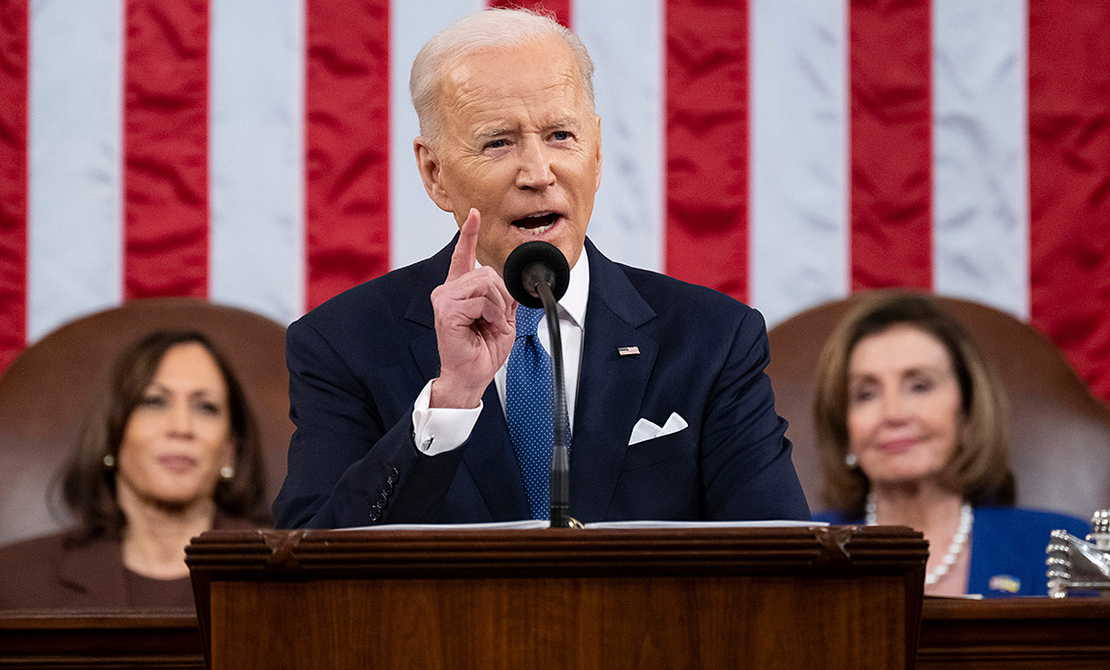 President Biden delivered his first State of the Union address to a joint session of Congress at the Capitol this week. Saul Loeb/Pool via AP

For several moments in his State of the Union address Tuesday, President Biden led a bipartisan, unified ovation from Congress for Ukraine’s heroic defenders.

Outside the House chamber, it was back to paralyzing debate about America’s fractured energy policies and prices, including the nation’s foremost energy weapon in the Ukraine crisis — the future of the vast U.S. reserves of natural gas.

On Monday, the first shipment of liquefied natural gas left the newest U.S. LNG export terminal, Venture Global LNG Inc.’s Calcasieu Pass plant in Louisiana. The destination of the LNG tanker chartered by the international energy trading firm Jera Global Markets was not disclosed, but Jera noted the significance of the cargo at a time when Russia’s gas shipments to Europe are a crucial strategic element in the Ukraine crisis.

The State of the Union and the LNG development show a central dilemma for Biden: How do you promote a decarbonized economy and ease high energy prices at the same time? And will the Russian invasion help spur more U.S. gas, creating more political tension for Biden from progressives?

Republicans have sought to capitalize on escalating energy prices by blaming the administration for restricting, delaying and killing the production of American energy, and empowering Russian President Vladimir Putin, “who has used energy as a weapon for decades,” Sens. John Kennedy (R-La.) and Dan Sullivan (R-Alaska) complained in a letter to Biden on Monday signed by more than 20 colleagues.

Supporters of LNG also have argued that the fuel can displace higher-emitting coal.

On the opposite side are clean energy advocates demanding that the administration reject oil and gas development and focus efforts on implementing a climate plan.

“The horrors the world is witnessing in Ukraine should be a clarion call to end our global dependence on fossil fuels and the petrostates they prop up,” said Kierán Suckling, executive director of the Center for Biological Diversity, in a statement following Biden’s speech to Congress. “It’s time for President Biden to stop equivocating and fully embrace every tool at his disposal to end the fossil fuel era.”

Tyson Slocum, director of the energy program at Public Citizen, said this week that “the Biden administration’s continued Achilles’ heel on its failed climate policies is its misplaced love affair with fossil fuel exports. … On the LNG export policy, I think we need to recognize that the ability of fossil fuel commodity diplomacy to alleviate global conflict and assist our allies is limited and overstated.”

In simplest dimensions, the arguments are shaped by different time horizons. High petroleum product prices are hitting consumers now, with the hardest impacts on those least able to handle them financially. Republicans see that as political capital.

But higher prices are leading oil and gas producers back into activity after a steep Covid-19 slump in 2020 and a mediocre 2021, leading to more supply that, in time, eases prices downward. The rebound in natural gas production adds more U.S. energy leverage to the U.S. financial broadside directed at Putin and his invasion of Ukraine.

On a longer horizon, more oil and gas activity is adding fuel to climate change effects that are growing increasingly destructive, building in a future of enormous economic and societal costs, according to a major report released Monday by the Intergovernmental Panel on Climate Change (IPCC). Responding to the new threat warning, U.N. Secretary-General António Guterres said the report “is an atlas of human suffering and a damning indictment of failed climate leadership.”

“This idea of ‘freedom gas’ … certainly does not help Biden,” said Pierre Noël, global research scholar at Columbia University’s Center on Global Energy Policy. “It sort of complicates his job because the climate narrative and the national security narrative really go against each other as opposed to being more aligned.”

Yet according to David Victor from the University of California, San Diego, we have to be doing things in the short term that climate advocates say are the opposite of what we need to be doing.

“In the short term to manage the economy and political support, you have to do all the things that are helping the oil and gas system function better. And the long term is all about getting off hydrocarbons, or conventional ones at least, and the long term’s becoming about getting off Russian supply … to isolate Russia. You’ve got to do both simultaneously. … Part of the challenge of talking about what does all this mean for climate is the lack of careful distinction between these two. The short term is essential and if anything will have very little impact on climate,” he added.

Biden’s role is complicated by the fact that a significant amount of the United States’ LNG is already under contract to buyers outside of Europe, according to analysts (Energywire, Feb. 25). Also, Energy Secretary Jennifer Granholm has repeatedly noted U.S. obligations under the Natural Gas Act to permit LNG facilities (Energywire, July 8, 2021).

As the arguments fly back and forth, high energy prices have begun to stimulate oil and gas development in ways that will affect the European crisis.

The U.S. is on track to become the world’s largest LNG shipper in 2022, passing Qatar and Australia, according to the U.S. Energy Information Administration.

“It has been an epic year for U.S. LNG,” wrote Lindsay Schneider, an analyst with RBN Energy in Houston in a 2021 year-end blog. Covid-19 and the economic beating the pandemic caused hobbled new LNG development. But “this year has seen global prices repeatedly smash previous record highs, driving existing terminals to operate at peak levels and renewing interest in new LNG buildout,“ she said.

“More than 21 million metric tons per annum of medium- and long-term capacity from planned LNG projects has been sold this year, creating enough forward momentum for multiple projects to move toward” in 2022, she added.

Yet the administration has faced pressure to boost support for LNG facilities. There are multiple projects that have been proposed or don’t have full financial backing, despite having permits.

Andrew Lipow, of Lipow Oil Associates in Houston, said there “are still [LNG terminal] expansions that are on the way several years out.”

“The political issue, as oil prices spike, is whether federal policies to expand leasing and drilling last year could have increased crude oil production and thus helped cushion the current price escalation,” Lipow said in an interview.

The Biden administration’s policies on pipelines and environmental rules have discouraged or dampened oil and gas development that might have happened in the past year, although it’s hard to put a figure on amounts, he said.

“It’s hard to see commitments of huge amounts of money when [producers] see the administration wanting to impose additional regulation,” he said.

David Braziel, also writing in the RBN Energy blog, said policy and legal challenges to new pipeline projects “could be a serious hindrance to get natural gas supplies to market from two of the U.S.’s most productive regions,” the Appalachian region and the Permian basin in Texas and New Mexico.

Higher prices now, however, will push some oil and gas companies from the sidelines into action, Lipow said. Chevron Corp. has announced plans to raise oil production 10 percent this year in the Permian Basin. Exxon Mobil Corp. is aiming for a 25 percent jump in production from the region.

“A number of smaller producers are increasing their budgets. And there’s a segment that is taking a wait-and-see attitude,” Lipow added.

The net effect of higher prices will send U.S. crude oil production to new high-level marks in 2023, reaching 12.6 million barrels a day, from 11.2 million barrels a day last year, according to EIA. U.S. natural gas output will continue a steady if gradual increase to 106.6 billion cubic feet per day, from 104.4 billion cubic feet per day this year, EIA added.

ClearView Energy Partners, in a series of reports the past week, cautions that the Ukrainian war could detonate new energy shocks.

As the conflict continues, the White House could increase financial sanctions to restrict investment in oil projects within Russia, the ClearView report said. “We can think of several potential triggers for such steps, including: the fall of Kiev, the installation of a Russian puppet, evidence of war crimes or atrocities and/or the imprisonment of Ukrainian President Zelensky,” the report added.

ClearView also took note of Putin’s description this week of Ukraine’s gas pipeline infrastructure as “dilapidated,” which could be cover for a future drop in gas shipments to Western Europe as retaliation against the economic sanctions buffeting Russia.

“Russian exports, which normally account for about 30% of Europe’s gas use, dropped substantially because of Russian pricing. And with European gas prices about four times as high as normal, U.S. exports surged to fill the gap. The extraordinary growth in U.S. oil and gas production is a geopolitical and economic asset for the U.S. that contributes to global energy security,” Yergin said.

“In the coming months, even if all Russian pipeline exports through Ukraine were cut off, U.S. exports could make up the deficit,” he said.

But Yergin also warned, “In the unlikely event that Russia cuts off all gas exports to Europe, U.S. exports wouldn’t be enough.”