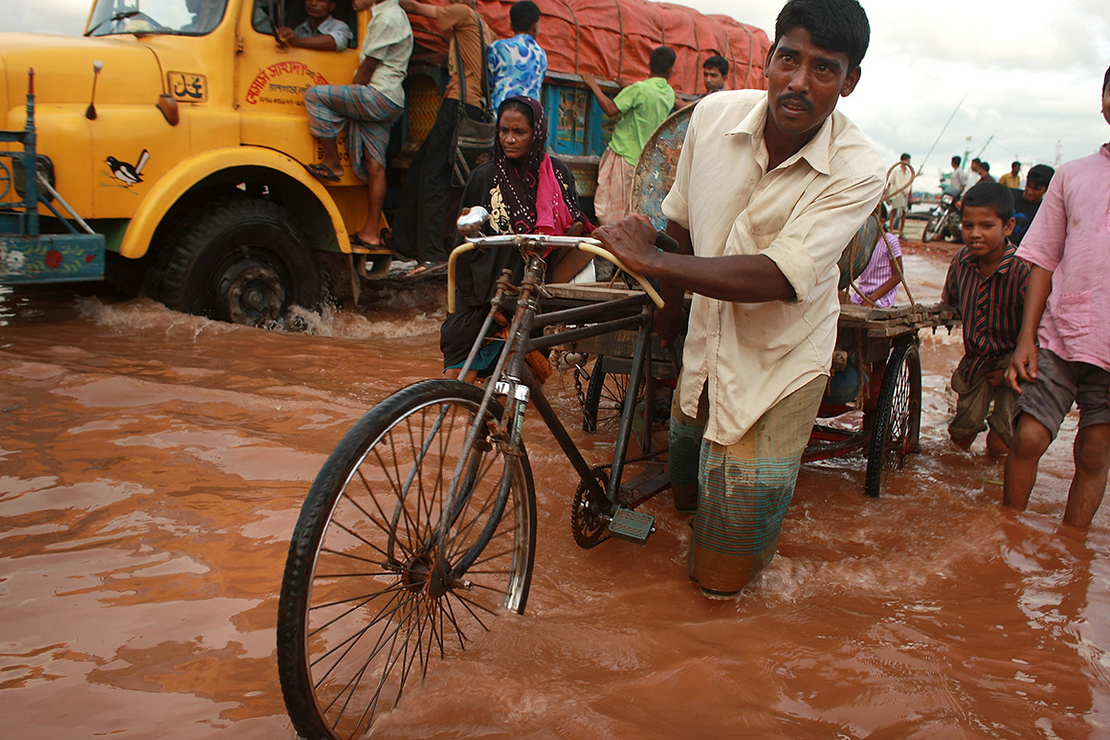 A family walks through a river to access the port city of Chittagong, Bangladesh. If sea levels were to rise 3 feet in the next 50 years, one-third of Bangladesh's coastline could be flooded, displacing 20 million Bangladeshis. Spencer Platt/Getty Images

When U.N. climate talks were reaching their apex earlier this month, U.S. climate envoy John Kerry met on the sidelines of the conference with American environmental justice advocates.

There was at least one surprise.

Several of the meeting’s participants were members of a White House advisory council set up under one of Biden’s earliest executive orders. Their role is to help shape Justice40, the Biden administration’s promise that poor and minority communities that had suffered from systematic underinvestment and environmental racism for decades would see at least 40 percent of all benefits from the historic clean energy and climate spending the Biden administration hoped to deliver.

“He was not aware of Justice40,” she said in an interview. “When I got back to the states last week, we had an [advisory council] meeting, and I brought the issue up. And I was told that the executive order only applies to the domestic programs of the State Department.”

The State Department has some domestic functions, like issuing passports. But the vast majority of its work is focused abroad. The same is true of the U.S. Agency for International Development and of myriad other offices and agencies that work with the rest of the world — including on climate change.

The White House and State Department did not respond to questions about whether Justice40 applied to the U.S. government’s international programs.

The meeting at the Glasgow, Scotland, conference center was cut short when Kerry was called away for last-minute negotiations with the Chinese delegation over a joint agreement that would be released later that night, which Kerry would bill as a game-changer as countries searched for agreement on the future of the Paris Agreement.

Shepard said she asked her contacts in the administration why the State Department’s international work was exempted from the climate and energy spending commitment. She said she hasn’t heard back.

She stressed that her own work is domestically focused but said she thinks vulnerable populations abroad would benefit from the same commitments.

“But as we seem to see, what we do internationally turns out to be often quite different than what we do domestically,” she said. “We lead with values sometimes. And then other times, we just don’t.”

While Kerry may have hoped the joint agreement with the Chinese would be a breakthrough, the last issue to be resolved at the climate talks known as COP 26 wasn’t about reducing emissions. It was about loss and damage — and funding that poor countries hope to see for the unstoppable damage to their lives, cultures and livelihoods by climate change.

The United States spearheaded opposition at the climate talks to a proposed loss-and-damage agency, which was sought by developing countries to hurry money to regions of the world slammed by storms, rising seas and withering drought.

Robert Bullard, a professor at Texas Southern University who is known as the father of environmental justice, saw a contradiction between that stance and the Biden administration’s domestic commitment to underserved communities.

“The environmental justice framework is not a domestic framework,” said Bullard, who is a member of the White House advisory group and who was also in the meeting with Kerry. “It applies globally.”

The proposal the U.S. delegation opposed in Glasgow was championed by 134 developing countries. It would have created a mechanism to coordinate and direct funds to those parts of the world that are experiencing the worst climate disasters.

Kerry told E&E News at the close of COP that he is wary of legal liability related to U.S. contributions to climate change (Climatewire, Nov. 19).

But Bullard compared that to a corporation that is trying to avoid paying damages for polluting a community’s water supply.

“The pushback by the U.S. is not consistent with its effort to rectify and to redress some of the harm that’s caused by our industrial policies and our policies when it comes to environmental protection,” Bullard said. “This is not rocket science.”

Liability has been a perennial worry for developed countries throughout the 30-year history of the U.N. climate process. The United States and other countries kept loss and damage from being recognized as an issue that’s distinct from climate adaptation until 2013. They delayed the flow of money for climate victims through the United Nations until this year, when Scotland pledged £2 million, prompting philanthropic organizations to open their wallets.

The global north’s angst is understandable.

‘Some kind of charity’

Countries that grew rich on coal and oil in the 19th and 20th centuries could face virtually unlimited damages if the door opens even a little on liability.

While China is now the world’s largest emitter of greenhouse gases, atmospheric carbon has centuries of staying power, and the United States, members of the European Union, the United Kingdom and other developed countries remain the biggest historic culprits.

Climate advocates say the U.S. position is no longer tenable.

“If you follow the science, as Kerry and others do, there’s no question that the U.S. bears a large responsibility,” said Rachel Cleetus, policy director for the climate and energy programs= at the Union of Concerned Scientists.

Kerry and other members of the U.S. delegations in Glasgow floated the idea of moving aid for climate disaster victims through other U.N. channels that are tailored to disaster response, rather than climate change. The money would have fallen outside of the U.N. climate process.

“We think that can be delivered more efficiently, probably, through some existing channels,” Kerry said in Glasgow.

But Cleetus said the world’s response to climate damage must acknowledge the role human actions played in creating it — especially in the global north.

“The reason they have to stop casting it as some kind of charity is that then it is completely up to richer countries,” she said. “They can decide to put money on the table or not; they can decide how much they want to put and how little. It can be very episodic, infrequent, whenever they feel like it."

“And that’s not in congruence with the need on the ground and developing countries, which are, you know, mounting,” she said.

The rich world is also seeing mounting damage from climate change, but it can better afford to recover from it. Last year, the United States experienced 22 individual weather and climate disasters that each cost U.S. taxpayers at least $1 billion.

“When a disaster happens in Texas, or New Jersey or the Northwest, the Congress acts and appropriates money, and huge sums of money flow,” said Alden Meyer, a senior associate with E3G. “There’s no pot like that for developing countries on the front lines of climate change.”

Instead, some poor countries now spend as much as 10 percent of their gross domestic product responding to climate change, a burden that is exacerbated by limits on their ability to borrow money.

Experts who follow loss and damage say that the U.S. delegation arrived in Glasgow unprepared for it to be the breakout issue of COP 26. They said the U.S. negotiating team didn’t have a mandate from Washington to negotiate with developing countries on their idea for a climate victim fund, and was unprepared for it to suddenly have so much support.

In the end, countries agreed to create a dialogue on loss and damage that will begin at talks in June. Developing countries hope it will eventually deliver their goal of a new funding facility.

Meyer, who worked with the U.S. delegation on loss and damage in the conference’s second week, said the United States has promised to approach the dialogue with “a constructive mindset and try to put concrete proposals on the table.”

But he said a resolution that could ultimately gain U.S. acceptance would have to fall somewhere between “open-ended liability and paltry sums of money.”

“Neither is acceptable,” Meyer said.