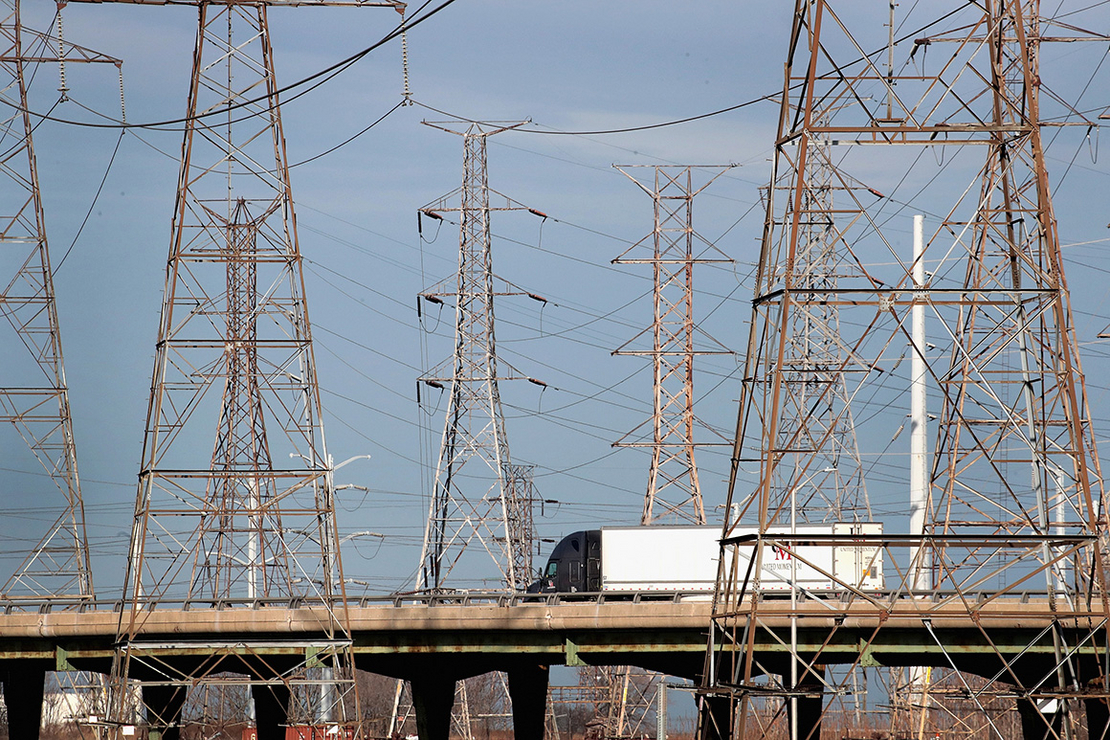 A truck passes by power transmission towers in Hammond, Ind. The Senate climate bill calls for a 40 percent reduction in carbon emissions in about seven years. Scott Olson/Getty Images

President Joe Biden’s commitment to halve emissions by 2030 would get a huge boost from the “Inflation Reduction Act,” according to two separate analyses.

Energy Innovation, a clean energy think tank, estimated yesterday that the Senate climate deal would cut emissions by 37 to 41 percent from 2005 levels by the end of the decade. The report comes on the heels of a similar finding from the Rhodium Group, which found the bill would reduce emissions by 31 to 44 percent over the same time frame.

The assessments mark a considerable improvement in the country’s emissions trajectory from a month ago, when the prospects for federal climate legislation appeared slim and the country looked set to miss Biden’s target by a wide margin.

“What we find is that the ‘Inflation Reduction Act,’ if it is enacted, should get the U.S. within shouting distance of the NDC commitment, but it won’t get the us all the way there,” said Anand Gopal, Energy Innovation executive director of strategy and policy, referring to the United States’ nationally determined contribution under the Paris agreement. “So the administration does need to lean in also on executive [actions], and states need to lean in on state actions in order to bridge that gap. But it’s now doable.”

The power sector is most likely to lead the charge in cutting emissions this decade, since the $369 billion bill focuses on clean energy tax credits for renewables, storage, nuclear and carbon capture and sequestration, said John Larsen, a partner at the Rhodium Group.

But the challenges ahead remain considerable, even if the bill passes.

Siting and permitting looms as a major challenge for wind, solar and transmission projects. While the adoption of electric vehicles is accelerating, analysts project it will take years before the number of EVs on the road makes a serious dent in emissions. Industrial decarbonization will greatly benefit from tax credits for carbon capture and hydrogen in the bill, but most projects are likely to come online after 2030, analysts said.

The United States averaged annual emission reductions of roughly 1 percent between 2005 and 2021. Emissions will need to fall by at least 2.6 percent annually to meet the Senate’s 2030 target.

“We would need to do that every single year between now and 2030, which has never been done before,” Larsen said.

U.S. emissions will likely increase for the second consecutive year in 2022. Carbon Monitor, an academic emissions tracking project, estimates U.S. emissions increased 5.7 percent through the first five months of the year, compared to the same time in 2021. The Energy Information Administration projects that energy-related emissions will increase 1.5 percent, with slower economic growth weighing on energy demand in the second part of the year.

Most projections, however, do not show U.S. emissions returning to pre-pandemic levels. Increased renewable generation and coal retirements have blunted some of the emissions rebound from the Covid-19-induced economic lockdowns in 2020, even with a rapid increase in transportation emissions.

But U.S. emissions are ultimately only part of a global problem. The country’s emissions associated with fossil fuel consumption were 5.1 billion tons in 2021 out of 36.4 billion tons globally, according to the Global Carbon Project.

Whether the legislation would significantly alter the world’s emissions trajectory depends on how it pairs with decarbonization efforts in other countries, said Zeke Hausfather, a scientist who leads climate research at Stripe, a financial services firm.

The “Inflation Reduction Act” would complement efforts in Europe and China to green the world’s energy system, helping lower technology costs needed to drive decarbonization efforts worldwide. The bill’s greatest global contribution may be tax credits to emerging technologies like hydrogen and advanced nuclear, which are viewed as critical to long-term decarbonization efforts, Hausfather said.

Still, he noted, action from the United States is necessary but not sufficient to limiting global temperature rise to less than 2 degrees Celsius.

“It is bringing us into the space between 1.5 and 2 degrees, assuming we take much stronger action after 2030,” Hausfather said. But, he added, “It’s always hard to know. This is a global problem.”

New oil and gas leases on federal land called for in the “Inflation Reduction Act” have been called “poison pills” by some environmental groups. They have questioned whether the bill can deliver the promised emission reductions.

In its analysis released yesterday, Energy Innovation found the oil and gas leases would have limited emissions impact. It estimated the clean energy tax credits would cut emissions by 800 to 1,100 million metric tons, while additional emissions from new oil and gas drilling would number 50 million tons.

Alex Dewar, an analyst who tracks decarbonization efforts in the oil industry at the Boston Consulting Group, said it is “virtually impossible” to model future oil industry emissions given uncertainty over market conditions. Still, it is hard to imagine that emissions related to new leases would come anywhere near the reductions produced by the bill’s clean energy tax credits, he said.

“If this is successful, it provides a pathway to reducing fossil fuel consumption overall in the U.S., but furthermore to reduce the emission intensity of fossil fuel production in the U.S.,” Dewar said.