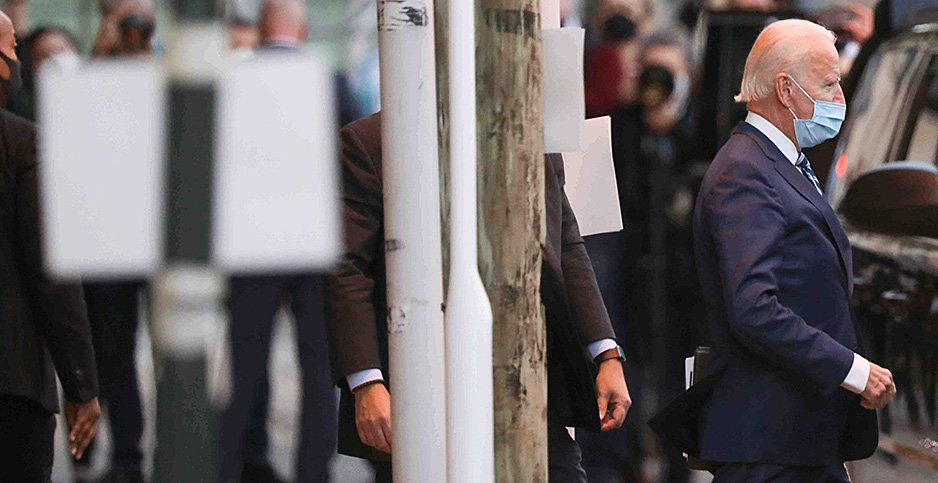 President-elect Joe Biden is set to face red-state opposition as he seeks to carry out his clean energy agenda. Biden is pictured here leaving the Queen theater in Wilmington, Del., on Tuesday. Saquan Stimpson/ZUMA Press/Newscom

The last time President-elect Joe Biden was in the White House, many of the Obama administration’s clean energy policies he championed were derailed by a Republican Senate majority and lawsuits by a swath of red-state governors.

Twenty-three states have set targets to reduce greenhouse gas emissions. However, the targets vary widely and are concentrated almost entirely in blue states that were in Biden’s column Nov. 3.

But the nation’s energy map appears to be changing faster than the political one, opening avenues to speed up the shift toward carbon-free power, according to a cross section of former regulators and current policy consultants who support climate action.

Forty-four investor-owned U.S. utilities are pledged to hit goals for reducing greenhouse gas emissions from the power they deliver, according to the Edison Electric Institute industry group, a number that grew steadily during Donald Trump’s presidency. The utilities — including most of the nation’s largest — serve customers in 41 states, at least 17 of them with Republican governors following this month’s elections.

"There is great variation in the utility sector about how real the [utilities’] pledges are," said Nora Brownell, former chair of Pacific Gas & Electric Co. and former board member of National Grid. "Some are doing it because states are ordering them," she said.

"Even in red states, there is a lot of clean energy being developed, partly because it’s cheaper" and also because influential companies want it as a condition of opening a new store or plant, said Kathleen Spees, an economist with the Brattle Group consulting firm.

In addition to the state targets and utility pledges, a growing list of mayors and company leaders want to buy carbon-free power, said Travis Kavulla, vice president for regulatory policy at NRG Energy Inc. and former chair of the National Association of Regulatory Utility Commissioners. "You put all of that together and it’s pretty significant."

Backing from the nation’s utilities could be vital to the outlook for Biden’s clean energy plan, whose 2035 target date for zero-carbon power comes five years earlier than even the House Democrats’ aggressive climate agenda this year.

Biden’s goal would require replacement of nearly two-thirds of the electric power delivered in the U.S. in 2019 that came from fossil-fuel-burning plants, and experts are divided on whether that can be done affordably with current technology. The transition would be the largest makeover of a U.S. industry in peacetime, said Peter Fox-Penner, director of Boston University’s Institute for Sustainable Energy.

"It’s a tall order," said grid expert Jürgen Weiss, senior lecturer at the Harvard Business School. "2035 is a nod to the more aggressive part of the electorate. It’s very, very hard to accomplish this."

As president, Biden will name FERC’s chair, who steers the agency’s agenda. The direction FERC will take after Jan. 20 is a guessing game, much dependent on which party runs the Senate, but the commission has the means to accelerate clean energy deployment if it chooses to, former officials and staff members said (E&E Daily, Nov. 9).

Hoecker said states and utilities with clean energy goals are "a new constituency." The possibility of big, long-haul power lines linking cities to prime wind and solar regions "isn’t as much of a fantasy as it might have been 10 years ago."

FERC has tools to support transmission service to the best renewable energy areas if it can secure more interregional grid collaboration over siting and cost allocation — issues that have long blocked major transmission proposals, Hoecker said. "FERC leadership has not seriously gotten into that." But the regional organizations’ membership is voluntary, so the commission must move carefully lest states rebel and leave regional groups. "It’s a delicate balance."

"If there are so many utilities — even in red states — that have explicit goals for clean power, how do we facilitate their success? This is not a philosophical issue. It’s a get-‘er-done issue," said Texas-based energy consultant and former senior FERC policy adviser Alison Silverstein.

With leadership in the White House, Congress and industry, "we can do this consistently without leaving a lot of bodies, or we can keep fumbling our way and waste a lot of time and money," Silverstein added. "That isn’t going to be tolerable, either to investors or utilities."

Endorsing the concept in a blog post last month, Kavulla said it "lets individual states choose the price and quantity of clean energy their retail customers should be served with, which will be generated somewhere in the market footprint. It’s not just a policy of taxing carbon in a state’s backyard and hoping other states do the same."

Lila Holzman, who manages the energy program at As You Sow, which supports and monitors clean energy commitments by private companies, said she’s seen "a lot of movement" in working with utilities. "We’ve seen them setting targets without federal policies," she said.

Continued monitoring is essential, Holzman added, where clean energy advocates mistrust utilities. "We don’t want to see ‘greenwashed’ statements that have no chance of being met, so we have to follow up. We still have a long way to go."