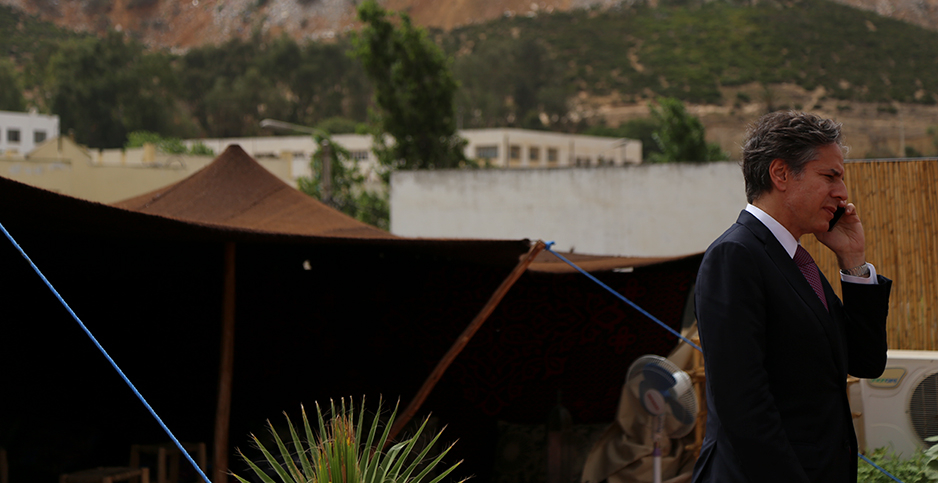 Antony Blinken talks on the phone before the U.N. Framework Convention on Climate Change conference in Morocco in 2016. State Department/Flickr

"The [Liberia Petroleum Refinery Co.] is one of the few [Liberian] agencies with management that thinks and plans strategically" with "an eye on future growth," she wrote in a 2009 cable released by WikiLeaks.

Since then, Thomas-Greenfield has voiced a somewhat different view: Climate change needs to be central to the U.S. government’s Africa policy. She lists it among the world’s top three issues, along with terrorism and migration.

"These African countries are not large emitters of pollution, yet they are paying a huge, huge cost in their countries. So we as the United States, and as the world leader, we have to be part of the solution, not just part of the problem," she told a forum in March.

As President-elect Joe Biden fills the top of his incoming administration with government veterans such as Thomas-Greenfield — whom Biden tapped yesterday as United Nations ambassador-designate — he’s choosing longtime policy hands to handle his climate agenda, rather than ideological purists.

That’s a change from the Trump administration, which has prized loyalty and nationalism over "deep state" credentials.

It’s also a pivot from the Obama administration, observers said.

Biden announced appointments to traditional foreign policy posts such as national security adviser and secretary of State in conjunction with the new job of climate envoy, which will be held by former Secretary of State John Kerry (see related story).

"What’s new and different is that climate is being rolled out with the foreign policy and security appointments," said John Conger, director of the Center for Climate & Security.

"The climate presence at [the White House National Security Council] was fairly small, even during Obama," said Conger, a former high-level Defense Department official. Having Kerry on the NSC would be "a big deal."

Biden also filled out other senior administration positions with Obama-era veterans who rank climate as a significant threat.

He picked Antony Blinken as secretary of State, Jake Sullivan as national security adviser and Avril Haines as director of national intelligence. He also plans to nominate Janet Yellen for Treasury secretary, according to The Wall Street Journal.

"It’s hard to overstate the both excitement and relief I have that we will have leadership … that understands the connection between climate and national security," said Christy Goldfuss, who was managing director of the Obama White House’s Council on Environmental Quality.

"It has been a hugely exciting start to the week and really just greater evidence of President-elect Biden’s commitment to ambitious climate action," said Goldfuss, who is now the Center for American Progress’ senior vice president for energy and environmental policy.

Biden’s personnel also won some praise from the political left, which is pushing Biden to mobilize the entire government to fight climate change. Varshini Prakash, co-founder of the Sunrise Movement, called the appointments "an encouraging sign."

Before his nomination for secretary of State, Blinken served as Biden’s national security adviser during the Obama administration and worked with him in the Senate as his top aide on the Senate Foreign Relations Committee.

Blinken has said that climate change is where the U.S. can win allies by demonstrating a commitment to reducing its reliance on fossil fuels. To do that, he has said he wants to weave climate policy into foreign policy, national security and trade.

Blinken has said that once the Biden administration rejoins the Paris Agreement, it will demonstrate that America has renewed its commitment to meaningful climate policy. An immediate priority would be to use U.S. economic leverage to make sure the nonbinding agreement is "transparent, enforceable" and doesn’t allow other countries to cheat. He said particular attention would be focused on China to make it more accountable for its climate goals.

"When it comes to climate change, I think that success at home is directly tied to our ability to lead effectively abroad," he told NBC News last month. "Success can breed success and strengthen our credibility. When we’re actually modeling good behavior, and when we get results, other countries are more likely to follow our lead."

Sullivan, who will serve as national security adviser, worked with Biden on security issues while Biden was vice president. He also was deputy chief of staff to Secretary of State Hillary Clinton. Sullivan, a Yale University Law School graduate who was a nonresident senior fellow at the Carnegie Endowment for International Peace after leaving the Obama administration, has praised grassroots movements that push political leaders on climate and has said the U.S. would use its influence to pressure polluting nations to take drastic cuts to carbon emissions.

"Jake is somebody who really got into this issue when he was with Secretary Clinton and I think has been deeply involved and more and more engaged, frankly, even over the last couple of years," said Nathaniel Keohane, vice president for international climate at the Environmental Defense Fund and a former special assistant to President Obama.

At an event at the Center on National Security last year, Sullivan said that climate action would require the grassroots movement to help drive the U.S. and other nations toward better carbon mitigation policies.

"I think climate change is one of the great examples of where ultimately it will be people power that drives political leaders to do the right thing rather than the other way around," he said.

"He will hold countries like China accountable for doing more, but he’s also going to push our friends to do more as well and to step up and fulfill their responsibilities to what is fundamentally a global problem, that every country needs to be participating in and contributing to," Sullivan said.

Lori Lodes, executive director of Climate Power 2020, called Sullivan "one of the smartest people" she has ever known. She said Sullivan brings a holistic understanding of national security and knows that climate science must be incorporated into protections for the country. She said his appointment further demonstrates that Biden is including climate experience into consideration for key jobs in the administration.

"It makes me feel very good about the future and the future for the climate crisis in that Jake understands it, he gets it and he knows how critical it is toward our national security and that all of it goes hand in hand together," she said. "It’s great news for those of us fighting for climate."

Haines, nominated as director of national intelligence, was a deputy CIA director and deputy national security adviser in the Obama administration.

Haines, who does not have much of a climate résumé, has a bachelor’s degree in physics from the University of Chicago and a law degree from Georgetown University Law Center, and ran a bookstore in Baltimore before entering politics.

She was instrumental in bringing more refugees into the U.S. during the Obama administration, raising the annual number from 70,000 to 110,000.

Some on the left have criticized Haines for playing a role in allowing CIA officials to escape accountability for torture techniques used during the wars in Iraq and Afghanistan.