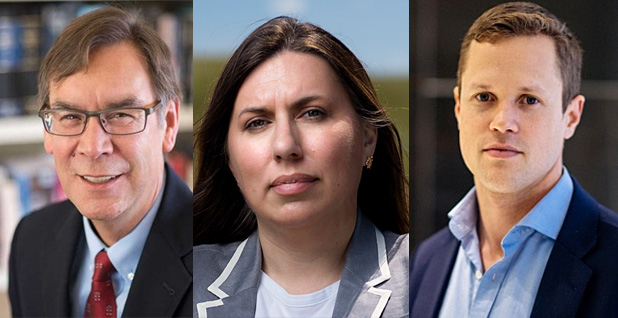 The Interior Department is stocking up on top lawyers with a record of opposing the Trump administration’s shrinking of the Bears Ears National Monument.

The appointments could foreshadow some legal U-turns even as the Interior secretary nominee, Rep. Deb Haaland (D-N.M.), awaits confirmation.

President Biden last month ordered Interior to commence a 60-day review of the southeastern Utah monument’s "boundaries and conditions" and to consider whether to restore it and other reduced sites to their states before President Trump took office (Greenwire, Jan. 20).

Natalie Landreth, newly hired as Interior’s deputy solicitor for land, has previously argued in a court brief that Trump "exceeded the limited authority delegated to his office, and violated the Antiquities Act and the separation of powers established in the Constitution" in slashing the Utah monument’s size.

Landreth spent 17 years at the Native American Rights Fund, which joined in a December 2017 lawsuit challenging the Trump administration’s actions.

"Many Native Americans and Native Nations … have profound historic, cultural, and spiritual ties to Bears Ears and the more than 100,000 historic landmarks, structures, and historic and scientific objects located within Bears Ears," the opening brief signed by Landreth and others noted.

Landreth withdrew from the still-ongoing lawsuit in the U.S. District Court for the District of Columbia last month, prior to her joining the Biden administration. Her new boss, acting Solicitor Robert Anderson, has likewise disputed Trump’s use of the Antiquities Act.

"The Act does not include a grant of power to modify or eliminate monuments … now a matter of intense controversy and litigation," Anderson stated in a 2018 Ecology Law Quarterly article, citing the Bears Ears lawsuit.

Anderson added that "Congress retains and exercises plenary power to adjust designations and uses of public lands counsels in favor of interpreting the statute consistently with … a limited Executive power to [designate] lands, but not to revoke or modify prior designations."

Formerly the Oneida Indian Nation visiting professor of law at Harvard Law School, Anderson is an enrolled member of the Bois Forte Band of the Minnesota Chippewa Tribe. His expertise hints at some of the broader changes ahead for Interior (Greenwire, Jan. 21).

"The Bears Ears Committee was designed to protect a treasure of the American West and stacking it with opponents of the monument could violate federal law," Annatoyn said in a statement at the time.

The Trump administration had a different take on the president’s authority within the Antiquities Act. In an October 2018 brief, the Justice Department countered that since enactment of the Antiquities Act, presidents have eliminated lands from national monuments on at least 18 occasions.

The 1947 opinion attributed this authority to a provision of the law "authorizing the establishment of national monuments, which states that their limits … ‘shall be confined to the smallest area compatible with the proper care and management other objects to be protected.’"

Interior solicitors’ opinions, though, can change, as can the federal government’s courtroom posture.

During the Trump administration, the Interior solicitor’s office withdrew at least a dozen prior legal opinions.

Federal Judge Tanya Chutkan, an Obama appointee, ordered participants in a lawsuit challenging the reductions to Bears Ears — as well as a separate case on Trump-era cuts to the Grand Staircase-Escalante National Monument — to address whether the lawsuits have been nullified by Biden’s order (Greenwire, Feb. 3).

Participants in both cases are required to submit a joint status report by March 5.

Arguments and responses in both cases were completed last summer, but Chutkan has not ruled in either lawsuit (Greenwire, July 29, 2020).

Under Biden’s executive order, the Justice Department is directed to seek a stay for any litigation or "other appropriate relief" depending on the outcome of the 60-day review, which will expire in late March.

While Biden could opt to use the Antiquities Act of 1906 to quickly reset the monument boundaries — the law allows presidents to set aside public land to protect areas of cultural, scientific or historic interest — some conservation advocates assert that any action must also address whether Trump violated the law when he shrank the monuments (Greenwire, Nov. 3, 2020).