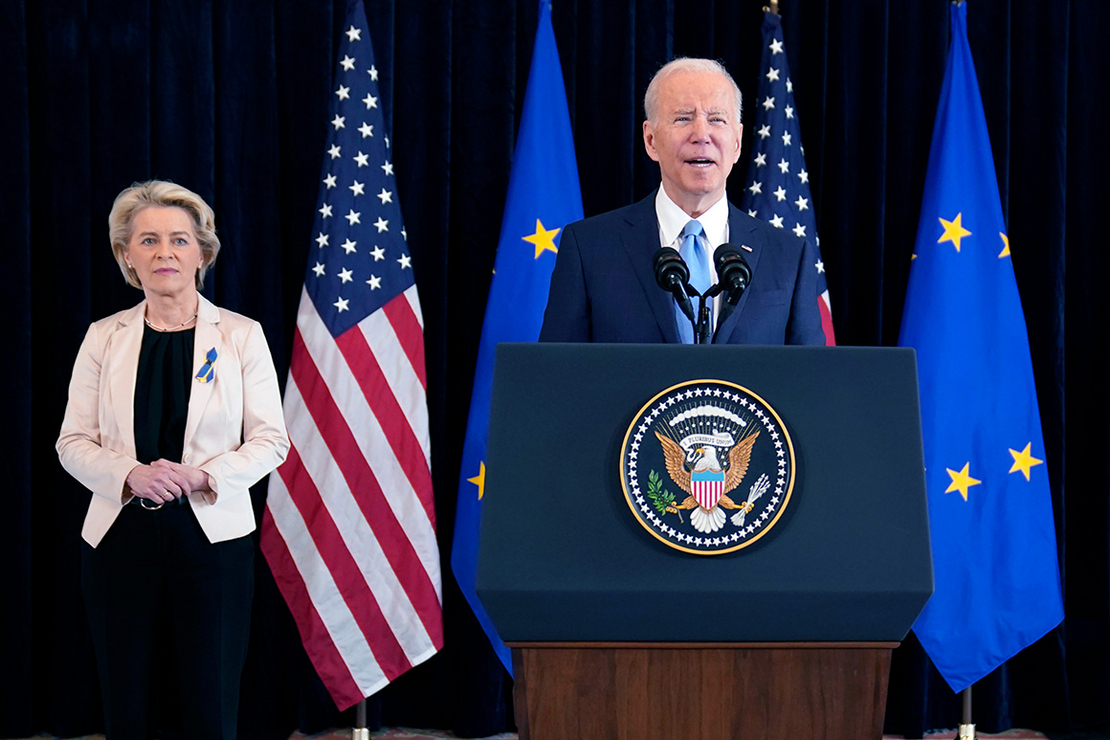 It’s a familiar divide in U.S. politics, with the Biden administration prioritizing European energy security in the short term.

Then there are the energy markets. They have their own read on the president’s pledge to deliver more U.S. liquefied natural gas to Europe and help expand Europe’s LNG import capacity.

“And that alone will lead to more investment in new capacity,” Munton continued.

The White House and the European Commission on Friday announced a joint effort to cut the European Union’s reliance on Russian natural gas and expand the bloc’s capacity to take more LNG shipped from the United States. Russian imports account for about 40 percent of the European Union’s gas consumption, according to the International Energy Agency.

Dustin Meyer, vice president of natural gas markets at the American Petroleum Institute, said the White House announcement reflected a “deepening understanding” that a shift away from Russian pipeline gas in Europe will require a “fairly significant investment across the board in gas infrastructure.”

Meyer said major investments are needed in both infrastructure in Europe and a “significant expansion of export capacity here in the United States.”

API, the American Exploration & Production Council, the Global Energy Institute at the U.S. Chamber of Commerce, and the Center for Liquefied Natural Gas all put out statements on Friday welcoming the U.S.-European Commission agreement.

But environmental justice and advocacy groups blasted the Biden administration for guaranteeing a long-term market for LNG, which is primarily methane, a significant source of greenhouse gas emissions.

“With the current international conflict and escalating energy prices, it is time for the administration to move away from fossil fuels, including halting LNG exports and infrastructure buildout,” Peggy Shepard, co-founder and executive director at WE ACT for Environmental Justice, said in a statement.

“Building even more LNG export terminals would lock in fossil fuel infrastructure and pollution for decades to come,” Shepard continued.

The Biden administration’s support for U.S. LNG exporters reflects years of U.S. regulatory support for the development of infrastructure to ship natural gas overseas. With 14 LNG projects federally approved but not yet built, the U.S. industry could roughly double its export capacity if company sponsors move forward with investments.

To do so, exporters need buyers. In concrete terms, gas utilities or other buyers in Europe need to commit to LNG supply contracts that lock in longer-term investments.

Germany, which until the war in Ukraine had been planning on importing more pipeline gas from Russia, has signaled an increased interest in importing natural gas by sea. In the days after Russia’s invasion of Ukraine, German Chancellor Olaf Scholz announced plans to quickly build two gas import terminals.

In the short term, the United States can’t send much more gas to Europe. U.S. terminals are shipping just about all the natural gas they have.

In the United States, natural gas is piped to facilities that supercool the gas and turn it into a liquid. Then it’s loaded onto specialty cargo ships.

There are eight such terminals operating in the United States right now. All but two of the 14 unbuilt projects with federal permits are on the Gulf Coast. Another six projects are before the Federal Energy Regulatory Commission. The gas industry is pressing the administration for faster approvals.

For Biden, the optics of enacting such policies would conflict with his clean energy agenda and anger supporters who want a sharp turn away from oil, gas and coal (Energywire, July 8, 2021).

Paul Bledsoe, a strategic adviser with the Progressive Policy Institute, disagrees with those who say that exporting LNG is backsliding on fighting climate change. Russian gas producers are bigger methane emitters than producers in the United States, he says.

“They have no regulations, no enforcement, no monitoring,” said Bledsoe, a former Clinton administration climate official. He added, “If we don’t increase exports, they’ll use more coal.”

The United States began exporting LNG in 2016 from the lower 48 states and is on track to have the world’s largest LNG export capacity in 2022, according to the U.S. Energy Information Administration. In Europe, there are about 30 import projects pending across the continent, according to the Center for Liquefied Natural Gas.

U.S. producers and exporters are already on track to exceed White House expectations for exports to Europe. “But this is due to attractive pricing and a function of market trade rather than governmental negotiations or cooperation,” said Ruth Liao, LNG editor of the Americas for ICIS, a price reporting agency.

Liao noted that U.S. export terminals are already running at very high rates and there is little room for immediate additional supply. The Calcasieu Pass LNG export project in Cameron Parish, La., will add to that capacity when it comes online in 2023.

Meyer at API noted the careful wording of Friday’s U.S.-European Commission announcement. The reality, he said, is that the destinations of LNG cargoes are dictated and determined by the market.

“We have to be realistic about the fact that neither the United States government [nor] the European Union have any real control over dictating where those cargoes go,” Meyer said.