Biden’s oil plan: The good, the bad and the illegal 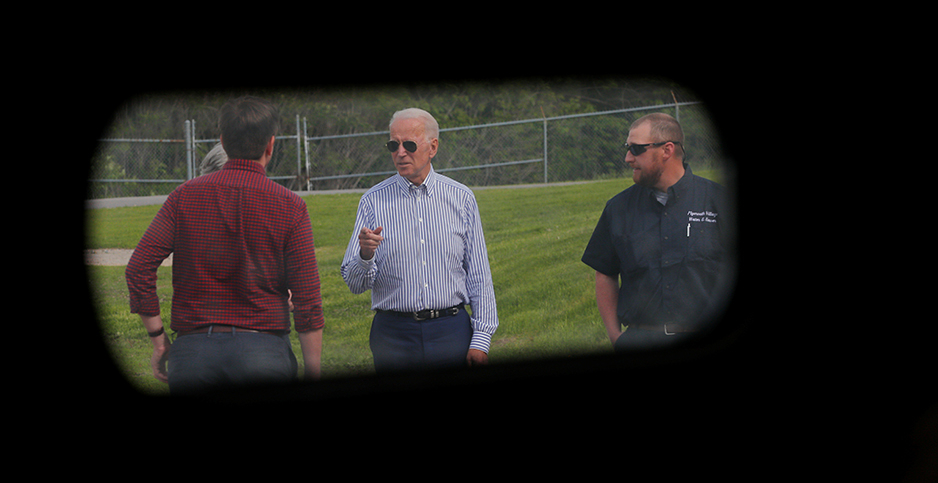 An overhaul of the federal oil and gas program didn’t make it into President-elect Joe Biden’s transition priorities listed on his website Sunday after he was declared the winner of the presidential race.

But observers are still expecting Biden and Vice President-elect Kamala Harris to curtail oil and gas development on federal lands and waters, an area where the president can exert significant direct control, experts say.

The president-elect’s platform has also pledged an end to hydraulic fracturing on public lands, a contentious development technique that is ubiquitous in the U.S. oil patch and has long stoked criticism from environmentalists.

"A real transition to a clean energy future can and must begin with a halt to new fracking — first on federal lands, and everywhere else soon after," Food & Water Action Executive Director Wenonah Hauter said in a statement soon after the election was called for Biden.

If Biden follows through on his campaign pledges, the beginning of 2021 could see a significant shift for the oil and gas industry in states like Wyoming and New Mexico — where federal oil and gas development is prominent. It also could potentially refashion oil drilling on federal land and water for many years to come.

But experts say there are several big "ifs" in Biden’s plan, not least of which is the potential backlash from curtailing industry. Federal oil development represents one-quarter of national production, according to the U.S. Geological Survey, and both oil and natural gas pour into both federal and state budgets.

Proposed policies to choke new leasing and permitting, and even throttle fracking on federal land, are likely doable, but they’ll spark political and judicial fights.

"I just wonder if that is politically feasible, day one, to start out on that negative foot," said Rebecca Watson, assistant secretary of the Interior Department for lands and minerals management during the George W. Bush administration. "It is politically thorny, and I think President-elect Biden wants to start out on a conciliatory, united mode."

To lease or not to lease

An end to leasing is widely viewed as the most feasible part of the Biden oil and gas proposals, according to experts.

A lease is a property right to develop federal minerals. And there are several ways that the administration can simply stop selling these leases temporarily, as the Obama administration did with coal in 2016 when it overtook a review of the federal coal program, Book said.

The Biden administration could make more long-term gains by penning regulations and management plans that make less land and water available for leasing in the future, he said.

Over time, a leasing ban strategy could take a bite out of federal oil and gas production with long-term implications that could outlast a four- or eight-year presidential tenure, according to Book.

The analyst firm Wood Mackenzie said in a brief Saturday that an end to leasing on federal land would be "minimal" in the near term. With offshore, the ban would play out gradually. By 2035, production would be roughly 30% less than if leasing had continued, the firm estimated.

A permitting ban, which Biden has targeted as a day one priority when he enters the White House, represents a trickier attempt to reduce oil and gas activity, Book said.

Once a company that holds a lease wants to take action to develop those minerals, it files an application for permit to drill with the Bureau of Land Management, for onshore wells, and the Bureau of Safety and Environmental Enforcement, for offshore.

If permitting is blocked, a company could argue the federal government is violating its legal right to develop, said Watson, the former Interior assistant secretary.

The arbiter over hobbling the oil and gas program on federal lands is likely the courts, experts said.

The Biden administration could try several ways to tweak or change guidance to bar permitting or leasing, but they can all be challenged by lawsuits, said Watson.

For example, she said, the Mineral Leasing Act dictates that the Interior secretary hold quarterly lease sales of available lands. A Biden administration could rewrite its management plans at Interior so that there are no more "available" lands for energy development, she said.

But "that’s a little too cute for my estimation, and it would face legal challenge," Watson said.

Similarly, a regulation that bars fracking may impede a federal leaseholder’s ability to develop their lease and may not clear legal scrutiny, she said.

But Book, of ClearView, said litigation has a powerful secondary purpose for the administration, which may indeed find it hard to win absolutely in courts stacked with conservative judges from the Trump era and a tenuous relationship with Congress.

The aggregate of stalling leasing or permitting, rewriting rules and fighting for them in court throttle some development for four to eight years. For an oil and gas industry that is in financial trouble due to low oil and gas prices and other pressures, that could also mean investment pouring away from the federal oil patch.

"In a lot of ways the word ‘slow’ and the word ‘no’ function in the same way," he said. "Losing slowly is winning."

While different policies have disparate direct impacts on the ground, local oil and gas economies are likely to fight any attempt by the Biden administration to quell their activities on public land, several experts noted. That’s not just a legal fight, but a popular one.

Gale Norton, George W. Bush’s Interior secretary from 2001 to 2006, said the political will to implement these priorities will have to be strong enough to fend off entrenched opposition from states and industries affected by a threat to revenue.

Norton recalled the fights that followed President Obama’s temporary ban on deepwater drilling in the Gulf of Mexico after the Deepwater Horizon incident in 2010 — a twist of industry’s arms to push for new safety practices in the offshore energy sector.

"The moratorium wreaked havoc on coastal economies," she said. "Members of Congress from both parties strongly objected. A new moratorium would risk a similar backlash."

States like New Mexico and Wyoming will be first in line to fight any policies that curtail production on federal land, given the impact to their state budgets, said Watson.

But greens say that pushback may not be as effective anymore as the electorate becomes more aware of drilling and sometimes opposed.

"When we first suggested a fracking ban, almost 10 years ago now, people kind of laughed at us," said Mitch Jones, policy director for Food & Water Watch.

The conversation has shifted.

In 2012, Obama was praising the shale drilling boom as a way to transition away from coal, Jones said. By 2016, Democratic primary candidate Sen. Bernie Sanders of Vermont had suggested a fracking ban. And this year fracking is a priority item for the president-elect, he said.

"In just a brief 10-year period, it’s grown into an issue that voters are familiar with. Do they have a deep understanding like someone in the oil and gas industry? No. They don’t need to," he said.

‘I doubt that he’s ever been on an oil rig’

There’s often a gap between the campaign promises of a presidential candidate and the actions of a first-term president, and it’s not clear yet where permitting bans, fracking regulations or leasing moratoriums will fall in the Biden administration.

Even so, Jones said groups are determined to keep the White House’s attention on fracking now that the campaign is over.

The Sunrise Movement, a group pressing for immediate climate change policy, tweeted Saturday that the president-elect would "get whiplash from how quickly young people turn back into his harshest critics if he doesn’t deliver on the political mandate this election delivered."

Jones was less aggressive but said green groups were ready to fight to keep these issues from fading away.

"The devil is in the details," he said of the potential for the Biden administration to attempt something more modest than has been promised.

But, he added, he didn’t expect that kind of shift.

Tom Sansonetti, former Interior solicitor during the George H.W. Bush administration and now a partner at the law firm Holland & Hart in Cheyenne, Wyo., said the feasibility of the proposals will ultimately depend not on Biden but whom he places in positions at Interior.

While the president-elect is likely directly involved in the decision to reenter the Paris climate accord — another of the president-elect’s day one priorities — he’s far less likely to give personal attention to smaller matters like leasing oil or natural gas in the West, he said.

"I don’t think President Biden knows the details of fracking. I doubt that he’s ever been on an oil rig," Sansonetti said. "The people in the White House that really have strong feelings about this, they will be the ones that end up shoving that particular policy down the pipeline."