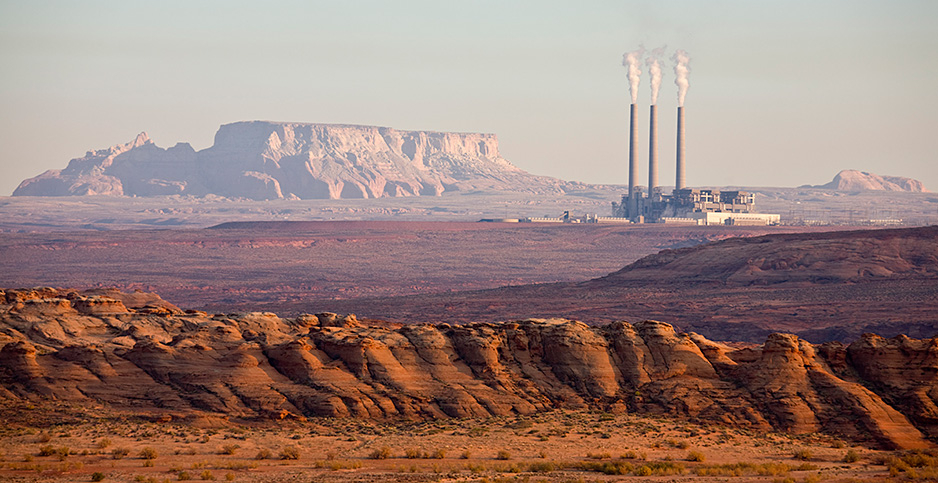 The Navajo Generating Station in Arizona, one of the country's biggest emitters, was demolished in December. The plant's closure will be a test for the Biden administration's efforts to help fossil fuel workers as it addresses climate change. Jamie & Judy Wild/DanitaDelimont.com "Danita Delimont Photography"/Newscom

When three 775-foot-tall smoke stacks at the Navajo Generating Station came tumbling down in December, sending plumes of dust into the sky and thundering reverberations off the mesas of the Arizona high desert, it marked the end of an era.

The federal government was instrumental in engineering the rise of the 2,250-megawatt coal plant 45 years ago, one of the country’s largest prior to its closure in 2019.

Now, President Biden faces questions about how to replace it, marking an early test of his promises to weave environmental and social justice into his climate agenda.

The massive coal plant and its nearby mine were the linchpin of the Navajo and Hopi economies for nearly a half century, generating tax revenues and providing well-paying jobs on reservations where both are in short supply.

When the plant closed, the Navajo saw $40 million in annual tax revenues and 500 jobs evaporate in the desert sun. Meanwhile, thousands of tribal members remain without electricity and running water. Navajo environmentalists worry the old coal mine that once served the plant will be a lasting scar on the landscape.

"The Navajo Nation operated as the battery of the Southwest for generations, with very little to show for it today," Jonathan Nez, the Navajo president, said in an interview.

"With coal becoming an ever decreasing source of revenue for the nation, much of it mined to benefit the growing West, including Phoenix and Los Angeles as well as the federal government itself, it is unconscionable that now in the face of coal mine and power plant closures little to nothing has been offered to assist the Navajo Nation with the transition," Nez said.

Energy analysts say the Navajo and Hopi are a powerful symbol of the country’s failure to help coal communities recover from a spiraling downturn. More than 20% of U.S. coal capacity has retired in the last eight years, leaving communities scrambling to find new jobs.

Like many leaders in coal regions, Nez was once a firm supporter of the industry. When the Navajo Generating Station’s owners announced its shutdown in 2017, Nez, then vice president of the Navajo Nation, expressed hope that the Trump administration might save it (Climatewire, April 3, 2017).

But he has shifted course. The change came amid a cascade of closures in and around the nation. Six coal plants in the sprawling region circling the reservation are scheduled to shutter between now and 2035 (Climatewire, Jan. 2, 2020).

Then in 2019, Nez issued the Navajo Sunrise Proclamation that called on the tribe to prioritize renewable energy development and to clean up uranium and coal mines on the Navajo Nation.

Fulfilling that goal has been a challenge, with tribal leaders forced to chart a new economic course at the same time the Navajo Nation has been battered by COVID-19.

The tribe has yet to finalize a deal to use 500 megawatts of transmission capacity it received as part of the shutdown of Navajo Generating Station, complicating the nation’s future of renewable development. A 55-megawatt solar project marks the sole renewable development on Navajo land.

Navajo political leaders, environmentalists and clean energy interests are eager for support from the Biden administration but say they don’t want the federal government to dictate the terms of the transition.

On a reservation where resource extraction has long been driven by energy companies and the federal government, the tribes want to chart their own course on renewable development.

"What we need are resources to develop a transition workforce and infrastructure to continue being an energy source, but with an eye for renewables," Nez said.

Washington, he added, could help by providing funding for Native renewable entrepreneurs, turning over environmental permitting to the tribes and establishing tax incentives to spur development of tribal renewables.

"There is an increase in demand from states like California and New Mexico, and other states around us," he said. "We see an opportunity."

Biden has attempted to heed such calls.

In a flurry of recent executive orders, the president established task forces dedicated to environmental justice and to help communities that are reliant on fossil fuels transition to new forms of economic development.

Wahleah Johns, a Navajo renewable energy developer, was tapped to lead the Department of Energy’s Office of Indian Energy Policy and Programs. And Biden nominated Rep. Deb Haaland (D-N.M.) as the first Indigenous person to lead the Interior Department.

Interior will play a key role in charting the energy transition on Navajo and Hopi reservations. The agency had an ownership stake in the Navajo Generating Station through the Bureau of Reclamation. It also signs off on right of way permits for major infrastructure projects and manages the Office of Surface Mining, Reclamation and Enforcement, which is charged with overseeing coal mine cleanup.

Many Navajo expressed hope that Haaland’s nomination would mark a new era of consultation between tribal communities and Washington.

"She understands the sovereignty side, the concerns of losing revenue from extractive resources, but she also understands the environmental and economic concerns," said Clara Pratte, who headed tribal outreach for the Biden campaign and is a founder of Navajo Power, a solar developer.

"There is such a unique opportunity to take a proactive approach that is really very prescriptive instead of putting Band-Aids on these issues," she added.

But the Biden administration will be forced to contend with the weight of history.

In the 1960s, the federal government settled on Navajo Generating Station as the power source to deliver water to Phoenix and Tucson. The massive coal plant powered 15 pumps operated by the Central Arizona Project, a canal system that lifts water out of the Colorado River and pushes it uphill over 336 miles to Arizona’s metropolises farther south (Climatewire, April 10, 2017).

To feed the massive coal plant, the planners of the Central Arizona Project turned to Black Mesa, a high desert plateau underlaid by a rich coal seam.

A Utah lawyer named John Boyden took a keen interest in Black Mesa’s coal reserves and set about establishing a Hopi tribal government, which was needed to sign off on coal leases needed to supply the new Navajo Generating Station.

Many Hopi opposed the effort, but Boyden eventually succeeded in forming a tribal government with the support of the federal government. He was appointed the new government’s attorney and ultimately negotiated a deal that paid the Hopi far less than the market rate for their coal.

About 12,000 people were later moved from their homes to make way for the mine. In 1996, some 16 years after Boyden’s death, a University of Colorado Law School professor published a paper showing Boyden simultaneously represented Peabody Energy Corp., the coal company that acquired the mining leases on Black Mesa.

Today, tribal environmentalists express concern that Peabody will let another mine languish: the Kayenta mine. It’s a massive surface mine that sent coal to a single power plant — the Navajo facility 78 miles away.

Their fears stem in large part from the Black Mesa mine, where old buildings have yet to be demolished and sagebrush dots a plateau once covered in pinon and juniper.

Peabody outlined its reclamation schedule for Kayenta in a 2019 application for a minor permit revision. Federal regulators deemed the plan deficient, noting that the company was proposing a slower rate of reclamation now than when the mine was still active.

Tribal activists have sought to raise the issue with the Biden administration. In January, a group of environmentalists and tribal leaders asked the new administration to ensure Peabody meet its reclamation obligations.

"Without intervention that alters the current course of enforcement, the many families that were forced to move to make way for mining will not be able to return to their ancestral homes," they wrote. "The water they need for survival will not be available. And basic amenities that were lost when mining began will remain inaccessible."

Peabody, in a statement, said its reclamation work has been delayed by COVID-19 restrictions. The mining giant said it remains committed to reclamation of Kayenta.

Such history is a reminder of the enduring power imbalance between the tribe, the federal government and energy developers, said Andrew Curley, a Navajo professor who studies the relationship between the tribe and the coal industry at the University of Arizona.

Southwestern utilities turned to Navajo and Hopi coal to feed the region’s growing cities, only to abandon the fuel when it was no longer economically competitive. As tribes work to develop their renewable resources, it will be the same utilities that will be the likely buyer of that power, he noted.

"They’ve been directing energy transition for quite some time," Curley said. "Whenever we talk about energy transition, we have to think about these other factors and what are some of the potential risks."

Indeed, structural barriers to Navajo renewable development still exist. Developers on tribal lands in Arizona pay state and local taxes, in addition to Navajo ones. Right of way designations are subject to the approval of the Bureau of Indian Affairs within the Interior Department.

Marketing the tribe’s transmission asset, meanwhile, is difficult because the most likely buyers are the utilities that once controlled a stake in the Navajo Generating Station. They own their own transmission capacity, providing them with little incentive to buy power from the Navajo.

"It boils down to a timing issue," said Walter Haase, general manager of the Navajo Tribal Utility Authority. "No one is buying the transmission because of coal closures. They are building projects and using that excess."

He predicted the transmission capacity will become more valuable in the future, but for now the tribe incurs a cost for maintaining the line. It pays around $1.9 million in annual capital costs and will be required to assume its share of operations and maintenance costs after a 10-year grace period.

The tribe has had more success on other fronts.

Nez, the president, recently negotiated a just transition package with Arizona Public Service Co., the state’s largest investor-owned utility and a former owner of the Navajo Generating Station. The deal would provide $128 million in transition assistance, and see 600 megawatts of renewable development built on Navajo land. It is subject to approval from Arizona utility regulators.

But that represents a small portion of what is owed to the tribes, said Kris Mayes, a former state utility regulator and law professor at Arizona State University.

Mostly, she said the Biden administration will need to appoint a point person on Navajo transition assistance to ensure the interagency working groups deliver on the president’s promises.