Biden’s promise to unions: ‘I’m all for natural gas’ 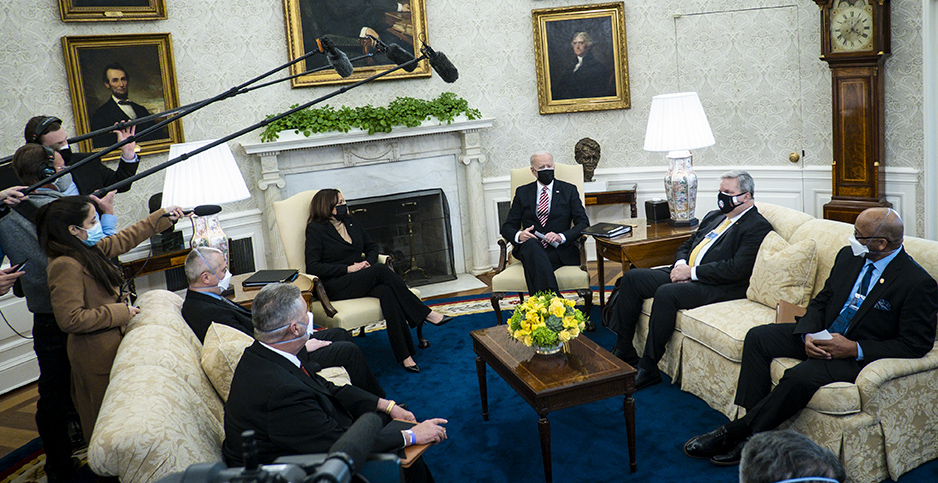 Behind the scenes, though, Biden’s Cabinet was already huddling with the pipefitters union, also known as the United Association, which draws serious work from fossil fuels but not renewable energy.

United Association General President Mark McManus said the administration had arranged Zoom calls between his union and Biden’s nominees to lead the Energy, Labor and Transportation departments, as well as EPA. Some nominees prioritized calling the pipefitters before senators.

"On some of them, within 24 hours of when [Biden] unveiled them," McManus said of their virtual meetings, adding: "We’ve never had that at the UA."

The Biden administration for weeks has been laying the groundwork for its legislative push on infrastructure, even as it publicly focuses on the COVID-19 legislation slated to pass the Senate in the coming days.

Unions have been central to the effort. Democrats are trying to reconcile their climate goals with labor allies who are eager for trillions of dollars in infrastructure spending but wary of undercutting the fossil fuels jobs they depend on.

Biden is betting that he can smooth over disagreements by offering labor leaders access and close communication.

So far, that seems to be working.

"We don’t do their bidding, and we don’t hold back if we have disagreements. But right now, we’re working on this shared opportunity," said Eric Dean, president of the International Association of Bridge, Structural, Ornamental and Reinforcing Iron Workers Union, also known as the Ironworkers.

The top-level access has been unprecedented, union leaders say.

"The engagement between our union — and others — and the White House has been second to none," said Terry O’Sullivan, general president of the Laborers’ International Union of North America, also known as LIUNA.

The collaboration has roots in the 2020 campaign, when labor helped craft much of Biden’s energy platform. And it has continued through one-on-one meetings with Cabinet nominees, a mid-February Oval Office meeting between the president and top labor officials that lasted almost two hours, and ongoing contact with senior White House aides.

Labor leaders say their access has borne fruit: Biden personally committed to them that he supports natural gas, as well as carbon capture and sequestration — two lifelines for the fossil fuel industry and its workers.

"I brought up natural gas specifically to him, we spoke about pipelines … and he says, ‘I’m all for natural gas,’" said McManus, who was one of the nine labor leaders who huddled with Biden on Feb. 17 in the Oval Office.

The White House declined to comment on what Biden said during that meeting beyond a readout, released that day, that highlighted the president’s plans to "create millions of jobs in R&D, manufacturing and clean energy."

‘Fighting over every single project’

There was one exception to the White House’s open-door policy to unions: the Keystone XL pipeline. Key labor leaders said the administration gave them no heads-up on the decision to yank the pipeline’s permit on Biden’s first day.

It wasn’t exactly a surprise; Biden had campaigned on shutting down Keystone. A few blamed the administration’s silence on President Trump, who disputed Biden’s election, delayed the transition process and incited a riot at the Capitol days before inauguration.

Now, some unions are hoping to put the politics of Keystone behind them. McManus, whose statement was wielded against Biden’s Cabinet nominees, said the pipeline’s supporters and opponents had perhaps "blown out of proportion" the impact of a single project after fighting over it for so long.

Keystone had supported 70 UA workers, with more on the way, McManus said.

"By no means is 70 UA members a large job at this point," he said. "It’s one too many if a rank-and-file guy loses his job. I come from the field and I recognize that, and that’s what we fight for. But it’s not of the enormous [scale] of a nuclear power plant."

Keystone was more important as a symbol, McManus added, of whether Biden would be hostile to all future pipelines.

During their Oval Office meeting, Biden assured union leaders that his administration would assess future pipeline decisions on a case-by-case basis.

A White House official confirmed to E&E News that the administration would assess each pipeline and infrastructure permit "on a case-by-case basis, based on their ability to meet our energy needs, create good-paying union jobs and help meet the president’s goal of net-zero [emissions] by 2050."

That’s still a tough sell to some union members seeking work on Minnesota’s Line 3 pipeline, Michigan’s Line 5 pipeline and other contentious fossil fuel projects around the country. Biden’s 2020 primary rivals campaigned against those projects, and even some more moderate Democrats have moved against them, like Michigan Gov. Gretchen Whitmer.

LIUNA, which had about 1,000 workers laid off from Keystone XL, is looking for Biden to give them more certainty on project permitting. O’Sullivan described the current process as "herky-jerky, one project at a time, uncertainty at every level."

O’Sullivan said laborers are looking for a "fair and balanced energy policy in this country where we’re not going to just be fighting over every single project — and that’s all we’re doing at this point."

Unions’ focus on speeding up permitting is part of their push for a comprehensive infrastructure package that’s massive in size and allows for long-term project planning.

Many unions are still working out the details of what exactly they’d like included, but there’s near unanimous agreement that the package should be big. The U.S. has a roughly $4 trillion infrastructure deficit, O’Sullivan said, so he thinks that’s a good starting point for a bill.

Along with the traditional focus on hard infrastructure, like roads and bridges, unions are eager to retool factories to produce clean tech products, like electric vehicles, as well as retrofitting buildings for energy efficiency.

"Recladding a building is sometimes more work for us than building a new one," said Dean, the Ironworkers president.

That means supporting fossil fuel workers with investments in new technology, like carbon capture, as well as helping people and sectors hurting from the energy transition.