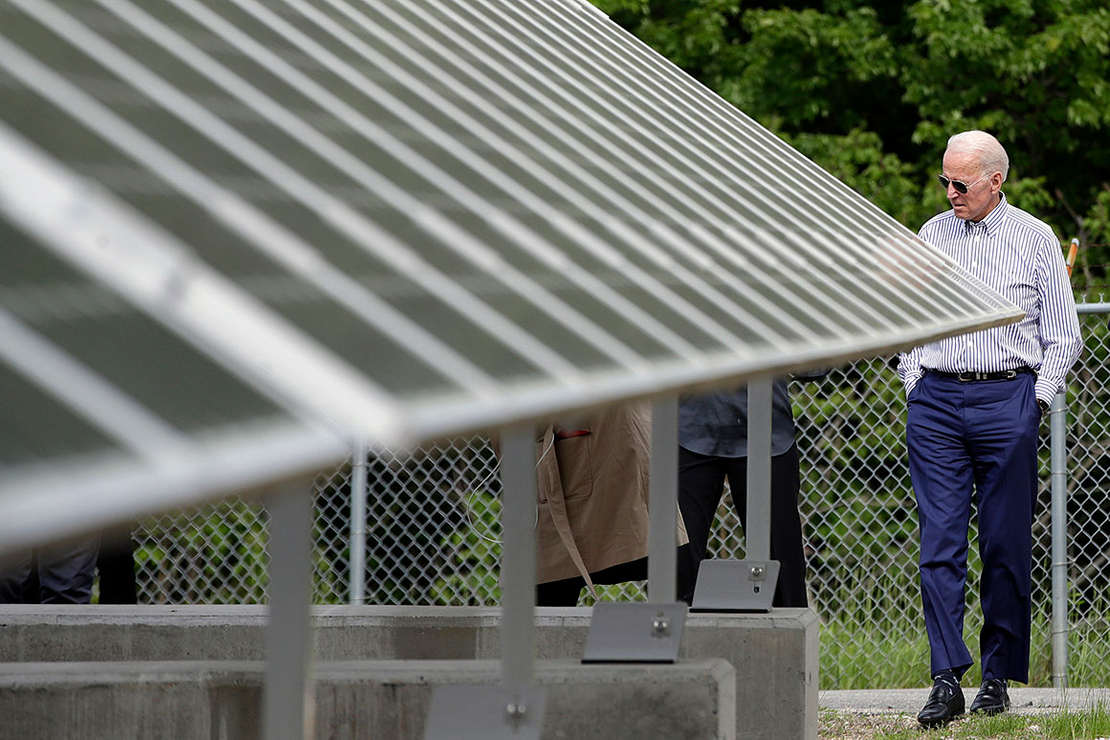 Presidential candidate Joe Biden looks at an array of solar panels during a tour at the Plymouth Area Renewable Energy Initiative in 2019 in Plymouth, N.H. AP Photo/Elise Amendola

With the right policies in place, the United States could generate 40% of its electricity from solar power by 2035, according to an ambitious new road map from the Department of Energy.

But to even have a chance of getting there, President Biden and congressional Democrats must pass a $3.5 trillion reconciliation bill with its key climate provisions intact.

That’s the takeaway of both experts and Energy Department officials. They see the reconciliation bill as a critical first step toward boosting U.S. use of solar power from the 4% share of the grid it now occupies to the 40% outlined in the Energy Department road map.

One reason is the reconciliation bill’s inclusion of clean energy tax credits. Another is its inclusion of a Clean Electricity Payment Program (CEPP), which offers funding to utilities to build out climate-friendly sources on the grid, said Mike O’Boyle, director of electricity policy at Energy Innovation.

Also imperative: reforms to the Federal Energy Regulatory Commission, which is outlined in a separate, smaller spending bill that has broader bipartisan support.

“There’s a lot that needs to go right to hit those [solar] targets,” O’Boyle said.

Absent the policies that Democrats want to pass through the reconciliation bill, clean energy targets become extremely difficult to hit, said John Larsen, director of climate and energy at the Rhodium Group. And the viability of the blueprint outlined by the Department of Energy yesterday is entirely in Congress’ hands, he said.

“Tax credits can do a lot, but they can’t necessarily get to 80% clean by 2030 in and of themselves, and that’s where the CEPP comes in to close the gap,” he said.

“The report shows that solar is ready to rise should Congress set the stage for such a transformation,” Larsen added.

The next few weeks of congressional negotiations will determine whether the solar plan becomes a reality, or just another climate pipe dream deferred by the grind of Washington politics.

Democratic Sen. Joe Manchin of West Virginia — a key vote who could determine the fate of the bill — has outright rejected the $3.5 trillion plan Democrats are now debating.

Manchin, a longtime critic of progressive climate policy, is envisioning a reconciliation plan closer to $1 trillion, Axios reported on Tuesday. Scaling back the reconciliation bill to that scale likely would spell trouble for the legislation’s key climate provisions.

House Speaker Nancy Pelosi (D-Calif.) has set a deadline of Sept. 27 to reach an agreement on the reconciliation package — though it’s unclear if Congress can meet that goal.

The CEPP would provide a cost-effective way for utilities to build out solar and wind resources while shedding coal and natural gas assets that otherwise would remain on the grid well beyond 2035, experts said.

Climate advocates and many Democratic lawmakers view that policy as a line in the sand, and won’t support a reconciliation bill that doesn’t include it.

But to get to 40% solar in the next decade, tax credits are essential, too, Larsen said.

A Rhodium report released in July shows that restoring and extending existing investment (ITC) and production (PTC) tax credits would be a key part of getting the United States to 80% clean power in a decade.

Extending existing tax credits would propel the United States toward a cleaner grid, but a real transformation would occur only if Congress can enhance the tax credit system for clean energy sources by providing “long-term availability, full credit value, flexibility, ability to receive direct payments, and extension to existing clean resources,” the report found.

The Energy Department report determined that the United States must install an average of 30 gigawatts of solar capacity per year between now and 2025 and 60 GW per year from 2025-2030. To get there, Congress needs to do its part, said Energy Secretary Jennifer Granholm.

“Achieving this bright future requires a massive and equitable deployment of renewable energy and strong decarbonization policies, exactly what is laid out in the bipartisan Infrastructure Investment and Jobs Act and President Biden’s Build Back Better agenda,” Granholm said in a statement.

The report also showed that — absent any policy — solar is still cost-competitive with fossil fuels and will continue to grow.

Data from the U.S. Energy Information Administration bear that out (Climatewire, Aug 27). Utility-scale developers in the United States are expected to install 16.2 GW of solar this year — a significant jump from the 10.6 GW installed in 2020, according to EIA. Before last year, the United States never installed more than 10 GW of solar capacity in a year.

The market will continue to drive an ambitious build-out of renewables in the coming decade as well, he said. Solar panels are getting cheaper and becoming more efficient. Lithium-ion batteries, which are needed to store the energy when the sun isn’t shining, also are dropping in cost and operating more efficiently, he said.

But to expand that potential — and to achieve the goal of 40% solar by 2035 — the federal government must nudge the market to move faster, he said.

“You absolutely need federal policy to meet a goal like this, and at the state level there’s a lot of inertia in terms of coal and natural gas assets that have useful lives well beyond 2035,” O’Boyle said. “That’s one of the things that federal policies can help address, by reducing the cost of renewables, providing incentives to go faster on renewables.”