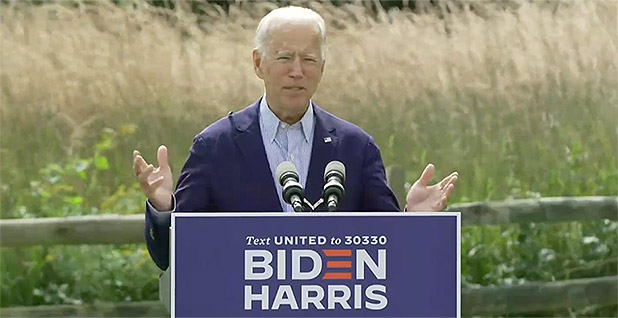 Joe Biden yesterday stepped into the future of climate politics.

The Democratic presidential nominee used a series of ongoing national disasters — worsened by climate change — to attack President Trump and tout his own energy agenda. Wildfires were still burning and storms were still raging when Biden delivered his climate remarks.

That’s a change from past presidential campaigns, when the candidates were less inclined to mention global warming during disasters out of fear the attacks would be perceived as politicizing tragedy. Even in the Trump administration’s first year, Democrats hesitated to wield climate-influenced events against the president.

Now, public pressure to call out climate change as an emergency has reshaped the way Democrats approach disasters. So has the coronavirus pandemic, which has killed hundreds of Americans per day for six months and changed the way politicians and the media talk about preventable death.

Biden is testing the new boundaries.

"If you give a climate arsonist four more years in the White House, why would anyone be surprised if we have more of America ablaze?" Biden said in a speech carried live by all three major cable news channels.

"We need a president who respects science, who understands that the damage from climate change is already here. Unless we take urgent action, it will soon be more catastrophic," he said.

Biden touted specific portions of his climate plan, including his deadline for ending electricity emissions by 2035.

That’s his most aggressive climate proposal. It also carries a political risk, and his campaign rarely emphasizes it. At the Democratic National Convention, nobody mentioned the 2035 deadline — except Sen. Bernie Sanders (I-Vt.), whose supporters had pressured Biden to adopt it.

Yesterday, Biden cast the deadline as one of his headline policies.

"And we’ll do another big thing. We’ll put us on a path to achieving a carbon-pollution-free … electricity sector by 2035 that no future president can come along and turn back," he said.

"Transforming the electrical sector … to produce power without carbon pollution could be the greatest spur to job creation and economic competitiveness in the 21st century, not to mention the positive benefits to our health and our environment," Biden said.

While casting the benefits of his plan as nationwide, Biden also described the threats of climate change as reaching beyond the Western states choking on wildfire smoke or the Gulf Coast states watching forecasts of severe storms.

"With every bout of nature’s fury, caused by our own inaction on climate change, more Americans see and feel the devastation — whether in big cities, small towns, on coastlines or farmlands. It’s happening everywhere. And it’s happening now," he said, while also mentioning disasters in Iowa and Michigan.

Biden used that universality to counter Trump’s appeals to traditional Republican constituencies in the suburbs.

"But you know what is actually threatening our suburbs? Wildfires are burning the suburbs in the West. Floods are wiping out suburban neighborhoods in the Midwest. Hurricanes are imperiling suburban life along our coasts," Biden said.

California Gov. Gavin Newsom (D) has generally praised Trump for approving disaster funding for his state’s wildfires, even as he’s criticized Trump’s climate record. Biden gave him no such credit.

"This is the same president who threw paper towels on the people of Puerto Rico instead of truly helping them recover and rebuild," Biden said.

Back then, Democrats were reluctant to quickly attack Trump’s response to the storm — and Republicans blasted talk of climate change as inappropriate.

Then-EPA Administrator Scott Pruitt called it "very, very insensitive to the people in Florida" to bring up climate change after 2017’s Hurricane Irma.

And Delaware Sen. Tom Carper, the top Democrat on the Senate’s environment committee, said at the time that climate politics should wait until after disasters end.

"When we’ve done a good deal more work in terms of cleanup and getting folks’ lives back to normal, I hope we do a deep dive into whether or not the warming in the Gulf of Mexico is really what’s causing this," he told Politico at the time.

Fast forward to this week: Carper has been using the fires to echo Biden’s call for climate action.

Indeed, Biden’s hardball on climate-fueled disasters won him praise from across the Democratic Party and the left — including the young climate activists who were among his loudest critics during the primary.

"A lot of what Biden’s saying right now — mobilizing millions of workers to accelerate a renewable energy transition to fight the climate crisis, creating millions of jobs & making the US a global leader along the way — sure SOUNDS like a #GreenNewDeal, even if he won’t call it that,"tweeted Devyn Powell, a climate activist who has worked with 350.org and the Sunrise Movement.