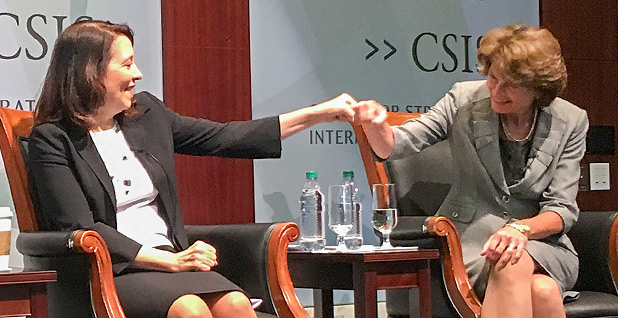 Just months after congressional efforts to enact the first major energy bill in nearly a decade sputtered, key House and Senate lawmakers signaled yesterday that another big push may rise from the ashes.

Senate Energy and Natural Resources Chairwoman Lisa Murkowski (R-Alaska) and ranking member Maria Cantwell (D-Wash.) reiterated their intent to resurrect the broad package they labored on for nearly two years of the 114th Congress, only to see it collapse in the closing days of the session when House Republicans walked away from the table.

"We’re not done with our energy bill that we advanced last year," Murkowski said during a panel discussion at the Center for Strategic and International Studies. "That was a bipartisan effort that deserves to be enacted into law. And we will see that through, and I think that’s a statement that you can take to the bank."

She and Cantwell assembled the package that addressed issues across the panel’s wide jurisdiction, including energy infrastructure and efficiency, grid security, natural gas exports, the Land and Water Conservation Fund and wildfires. With input from 70 senators, the package passed the Senate 85-12 in April 2016.

The House approved its own energy bill that addressed a narrower scope of issues but later added a host of contentious provisions from the ENR Committee that had Senate Democrats worried about going into conference negotiations.

Lawmakers eventually launched those talks, but while Senate conferees said they were making progress, the House abandoned the effort in early December, saying they couldn’t find agreement on outstanding issues.

Murkowski and Cantwell slammed their House counterparts for that stance at the time, and Cantwell in particular made clear yesterday that hard feelings remain over the slight (E&E Daily, Dec. 8, 2016.

"We went to every effort" to get an agreement, including marching to the House on a Sunday night to press their counterparts, Cantwell said during the CSIS event. "I think we left notes on people’s desks, ‘We’re here. Where are you?’"

There has been talk for months about reviving the Senate package in part or in whole, and Murkowski said yesterday she intends to reintroduce the measure at an unspecified time with revisions.

"I think we’ve got an opportunity with what we built," she said in an interview. "Everybody knows that, so I want to capitalize on that. So, no, I’m not interested in doing kind of, one here, one there, one there and then just do this one string of pearls."

Cantwell said she just wants to see the work completed.

"We want the House to own up to the fact that they dropped the ball on an important policy that needs to get done," she told E&E News yesterday. "That’s what I want."

Rep. Joe Barton (R-Texas), former chairman of the House Energy and Commerce Committee who now serves as the panel’s vice chairman, said during an interview yesterday that Murkowski told him a couple weeks ago she wanted to advance a major energy package, a move that he foresees as likely.

"I think it’s not only possible, it’s probable," Barton said. "I think we’re about to pass a health care bill and once we do that, I think we’re going to see a re-energized spirit to get things done."

While not expressing a preference, Barton said moving a series of smaller bills could prove faster, especially once they have widespread support. "The bigger the bite," he said, "the harder it is to chew."

Another unknown is the upcoming push for a broad infrastructure package President Trump has said should total $1 trillion. Murkowski, Walden and House Natural Resources Chairman Rob Bishop (R-Utah) have all suggested their committees will contribute to that effort.

Bishop, whose panel worked closely with its Senate counterpart during last year’s energy package negotiations, said he could envision another try.

"I think there is some stuff we can start without having to do a lot of the spade work again," said Bishop, who said he worked well with Cantwell on mutual priorities.

"They were very open to some things that were extremely important to us," the Republican said, citing a sportsmen’s package and measures related to forest management for wildfire prevention.

Despite Barton’s enthusiasm, Energy and Commerce Democrats said yesterday they were nowhere near an agreement, including on issues like hydropower and natural gas pipeline permitting.

"I think we’re still far apart," said Rep. Bobby Rush (D-Ill.), ranking member of the Energy Subcommittee, adding that tension over environmental issues is not only present but "dominant" in the deliberations.

Republicans, he said during a hearing yesterday, aren’t willing to "seriously entertain" Democrats’ concerns, and noted that past efforts that started out with unity or goodwill eventually fizzled and ended with both parties "miles apart."

At the hearing on draft legislation, debate among conservation and industry groups revealed continuing disagreements over critical environmental reviews and protections (E&E Daily, May 1).