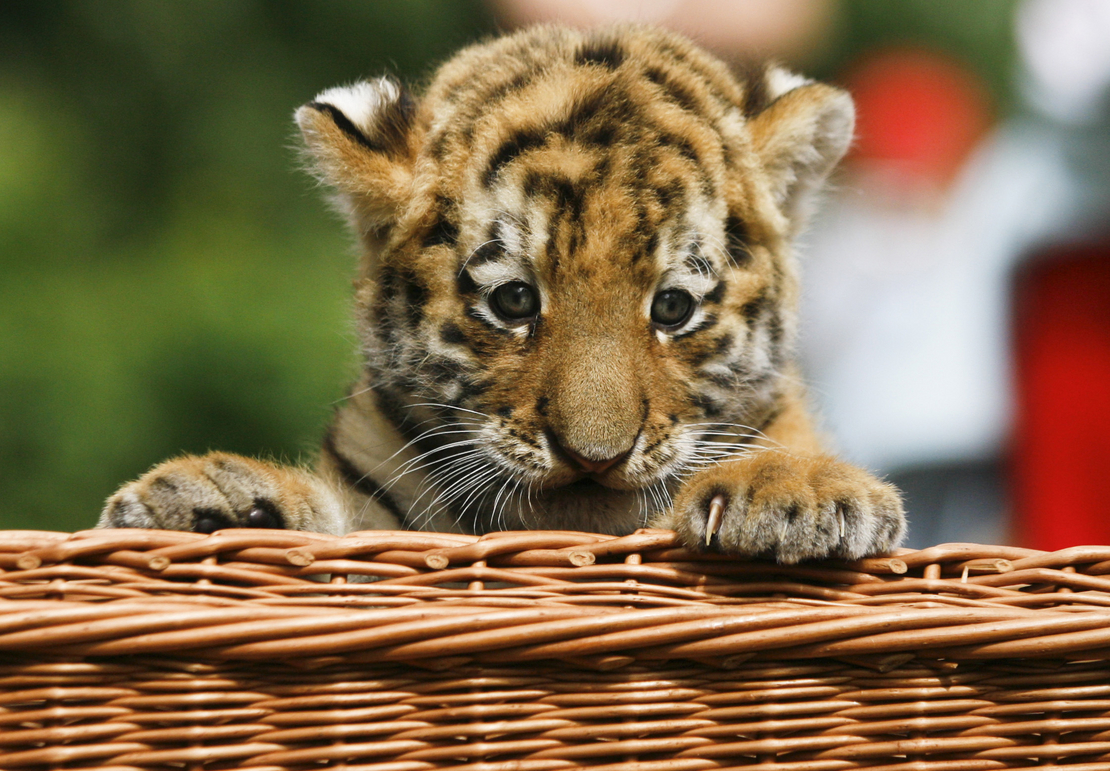 A Siberian tiger cub during a media presentation at the Berlin Zoo in Germany. A new law in the United States will put an end to roadside operations that allow people to pet tiger or lion cubs. Markus Schreiber/AP Photo

Some animal owners will need federal licenses. Some Interior Department officials will get busy writing new regulations. Some roadside zoos will lose a popular but unsuitable attraction.

The myriad consequences will flow from the “Big Cat Public Safety Act,” signed by Biden Tuesday without much ceremony following a multiyear Capitol Hill journey that was at times propelled by the garish misadventures depicted in the 2020 Netflix series “Tiger King: Murder, Mayhem and Madness.”

The show documented the Greater Wynnewood Exotic Animal Park in Oklahoma and its former owner, Joseph Maldonado-Passage, who went by “Joe Exotic” and is currently incarcerated at Federal Medical Center, Fort Worth, on a murder-for-hire charge (E&E Daily, May 13).

Authored by Rep. Mike Quigley (D-Ill.), the new law targets in part the kind of roadside operation that sells intimate access to big cats. Irby estimated there are currently fewer than half a dozen such operations that profit by letting people pet lion and tiger cubs.

This is markedly down from what Irby said were 60-plus cub-petting operations in existence when the first version of the big cat protection measure was introduced 11 years ago.

“Public awareness has shut down most of them already, and Covid had an impact on closing a few of them, as well,” Irby said.

Current owners of tigers, lions and other big cats now will be compelled to register those animals with the Fish and Wildlife Service. This is supposed to aid law enforcement officers and other responders in the event of a zoo breakout or similar emergency.

Lawmakers want to avoid a repeat of what happened in 2011 in Zanesville, Ohio, when an exotic animal collector released more than 50 animals, including 38 tigers, lions and cougars, that he had been keeping on his property. Law enforcement officers, caught by surprise, shot the roaming big cats dead.

“My profession requires that I be prepared for unexpected and often dangerous circumstances,” Muskingum County Sheriff Matt Lutz, whose office responded to that event, told a House panel last May. “However, my colleagues and I should not be faced with the dangers of big cats kept in unqualified hands, nor should our communities.”

The Association of Zoos and Aquariums joined Animal Wellness Action, the Humane Society of the United States and like-minded organizations in backing the bill.

The approximately 340 public and private facilities that currently hold Agriculture Department licenses to possess, exhibit and breed big cats will, with limited exceptions, be banned from allowing public contact with the animals.

Carson Barylak, campaigns manager of the International Fund for Animal Welfare, said that the now-prohibited direct contact exhibits “incentivize speed-breeding and drive the ‘pet’ trade” because cubs are generally valuable for such a short portion of their lives.

“The cub handling ban will address some of the most glaring cruelty and help stem the haphazard and incessant breeding of exotic felines,” Barylak said.

Exhibitors will either have to stop allowing animal contact or establish a 15-foot safety gap. The same rule will apply to facilities that host or participate in special fundraising events that allow some form of encounter with the animals.

The Congressional Budget Office estimated there were about 150 of the latter facilities.

“CBO expects that prohibiting contact with the cats, or keeping the 15-foot gap, would decrease the financial success of these events,” the nonpartisan office stated in its assessment of the bill.

The budget office figured that the cost of prohibiting or limiting these activities, in the form of forgone income, would be about $80 million each year. The analysts cautioned, though, that they lacked data on the ability of licensed exhibitors to meet the new setback and barrier requirements.

Carole Baskin, CEO of the Florida-based Big Cat Rescue and the alleged target of the murder-for-hire scheme for which Maldonado-Passage was convicted, praised the new law.

“This bill has been the number one goal of my thirty years of advocacy to stop the mistreatment of big cats,” Baskin said in a statement.

Regulations implementing the bill, including the cost to register the animals, will need to be developed, and the number of animals that would need to be registered is unknown. But based on information from animal welfare organizations, CBO expects the aggregate costs to be small.

Approximately 200 cubs are traded or sold each year at a price of roughly $8,000 per animal, according to industry sources; many of those cubs are born in facilities that would be unable to continue breeding big cats.

Maldonado-Passage, now 59, is seeking a new trial, claiming in a June court filing that there was “clear evidence of entrapment, government misconduct, criminal activity [and] perjury,” among other things.

Prosecutors, following a line-by-line rebuttal of the myriad claims, stated that a “defendant is entitled to a fair trial but not a perfect one, for there are no perfect trials” and that “Mr. Maldonado-Passage received just that — a fair trial.”