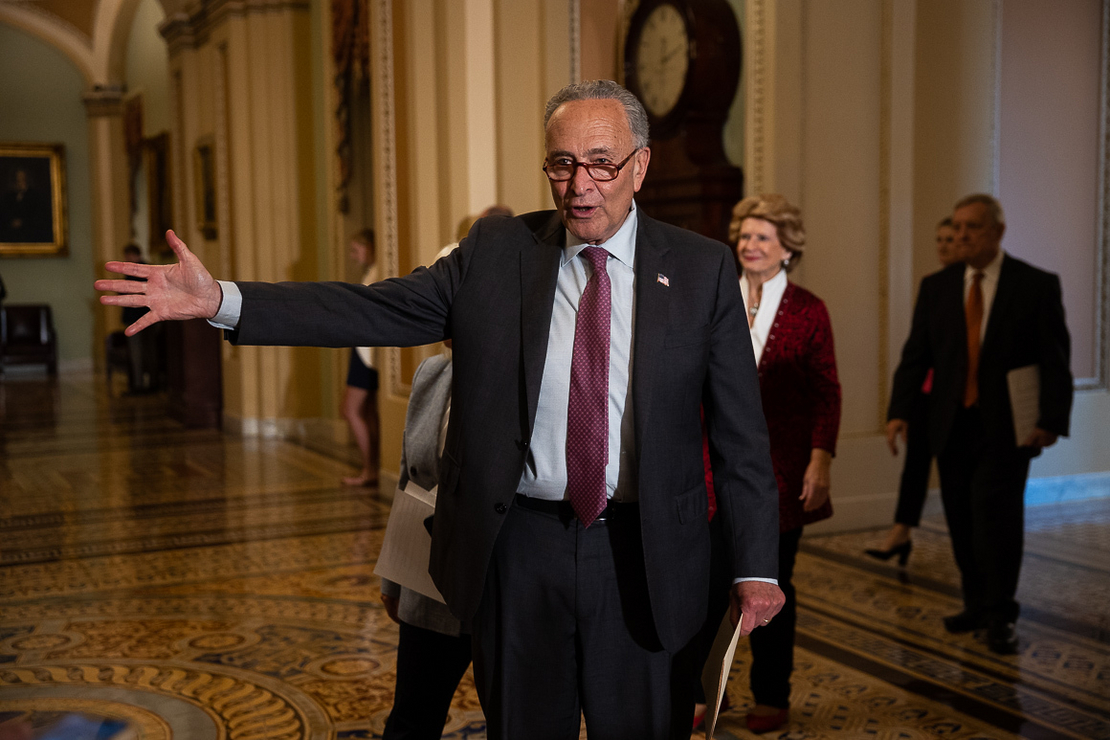 Ending months of speculation and negotiations among progressives and moderates within his caucus, Senate Majority Leader Chuck Schumer (D-N.Y.) announced the spending limit for the upcoming reconciliation package after a lengthy meeting in the Capitol yesterday.

Factoring in the roughly $600 billion in new infrastructure spending agreed to between the White House and senators, the total sum of investments is $4.1 trillion, Schumer noted.

“Every major program that the president has asked us for is funded in a robust way,” he told reporters, adding that Democrats “are making some additions to that.”

Details were scant about the agreement, but Biden’s American Jobs Plan — released in March — included about $2.3 trillion in spending overall on infrastructure, including hundreds of billions of dollars scattered throughout the plan to boost clean energy production and the resiliency of physical infrastructure to a warming planet.

Schumer said last night that the budget resolution would include an expansion of Medicare, including dental, vision and hearing coverage — a top priority of Budget Chair Bernie Sanders (I-Vt.). President Biden will brief Senate Democrats on Capitol Hill at lunchtime today.

Sanders, who had pressed for a $6 trillion budget resolution but was constrained by moderates within the Democratic caucus, described the plan’s climate spending as a “big deal.”

“Anybody who watches what’s going on in California, the West Coast today, it’s going on around the world, understands that if we do not get our act together in transforming our energy system, away from fossil fuels, that the planet they’re going to be leaving our children and our grandchildren will be increasingly unhealthy and uninhabitable,” he told reporters.

“Today,” said Sanders, “we begin the process of having this great country lead the world in transforming our energy system.”

Sanders suggested that wealthy taxpayers and corporations will foot the bill for the plan, which Schumer said will be fully paid for. Still, the smaller figure announced last night left climate activists unimpressed.

“A $1 trillion investment every year over the next 10 years OR live with the cost of climate disaster & loss of life over the next few decades? There’s no comparison here,” the Sunrise Movement wrote on Twitter, referencing the group’s calls for $10 trillion in spending over a decade to fight climate change.

The announcement of an overall spending limit marks a major step for Democrats, as they attempt to pass a bipartisan infrastructure deal — with more details possible later this week — and the fiscal 2022 budget resolution before the August recess.

The budget resolution marks the first step in invoking the budget reconciliation process, which will allow the package to bypass a GOP filibuster and pass the Senate by a simple majority.

Schumer acknowledged the challenges ahead last night. “We know we have a long road to go but were going to get this done for the sake of making average Americans lives a whole lot better,” he said.