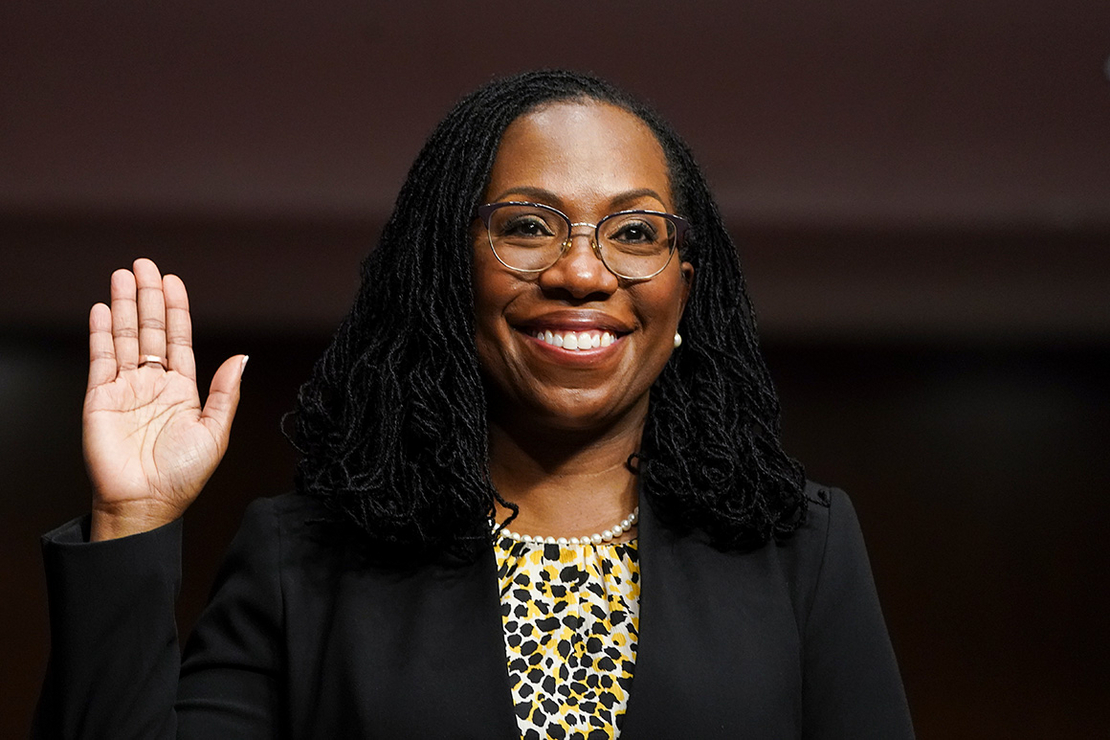 President Biden’s nominee to replace retiring Supreme Court Justice Stephen Breyer would bring deep environmental expertise to the bench at a time when the court is poised to consider the breadth of EPA authority under the nation’s bedrock air and water laws.

While Ketanji Brown Jackson will not participate in the blockbuster climate case West Virginia v. EPA, scheduled for argument Monday, she is expected to be confirmed in time to hear Sackett v. EPA, a case that asks the court to rein in the federal government’s jurisdiction over the nation’s waters (see related story).

“Often the Supreme Court has the last word on how, and sometimes whether, our laws designed to protect the environment and public health are enforced,” said Manish Bapna, president and CEO of the Natural Resources Defense Council, in a statement today. “This year alone, the Court will hear two cases that could have a profound impact on the government’s ability to address the climate crisis and protect the nation’s wetlands, streams and waterways.”

Bapna added: “Those cases underscore the importance of confirming justices and judges, like Jackson, who respect precedent and recognize the government’s role in addressing consequential societal issues, like protecting the environment and public health.”

Biden plans to officially announce Jackson’s Supreme Court nomination later today. She would be the first Black woman to serve on the bench.

“Judge Jackson is an exceptionally qualified nominee as well as an historic nominee, and the Senate should move forward with a fair and timely hearing and confirmation,” the White House said in a press release this morning.

Jackson, 51, would replace Breyer, 83, who plans to retire by early summer. Jackson, a former Breyer clerk, is known for mirroring the justice’s moderate approach in legal disputes on issues ranging from presidential powers to environmental protection.

Rumors of an imminent Supreme Court nomination began swirling yesterday when the U.S. Court of Appeals for the District of Columbia Circuit, Jackson’s current bench, issued an unusual Thursday opinion. The court typically issues decisions on Tuesdays and Fridays, but it handed down a Monday ruling just before another D.C. Circuit judge — Justice Brett Kavanaugh — was named to the Supreme Court in 2018.

In a ruling that demonstrated her ability to reach across political lines, Jackson yesterday joined Neomi Rao, a Trump appointee, in finding that the Federal Energy Regulatory Commission had not provided a sufficient explanation for ending a contract between a gas-fired power plant in Connecticut and a regional grid operator.

If Jackson is confirmed, the Sackett Clean Water Act case may be among the first disputes she hears as a Supreme Court justice. As in the West Virginia climate case, which deals with EPA’s ability to broadly regulate greenhouse gas emissions from power plants, the justices took the highly unusual step of granting certiorari to Sackett over the objections of the Biden administration, which said the case is related to a rule the federal government has yet to promulgate (Greenwire, Feb. 14).

Legal observers have attributed the Supreme Court’s unusual moves in Sackett and West Virginia to the new 6-3 conservative majority. Jackson’s placement on the court would not shift its ideological balance, but her presence would help avert a deeper loss to the liberal minority.

“The Supreme Court’s new Conservative supermajority is on the precipice of overturning decades of long-settled precedents in a way that furthers a political agenda at the expense of basic rights and protections,” said Earthjustice Senior Vice President of Programs Sam Sankar in a statement. “We need fair-minded Justices who decide cases based on facts, science, and settled law, and who understand the Court’s proper place in our system of government.”

Jackson, who has spent less than a year on the D.C. Circuit, issued what may be her best-known ruling in 2019 when she was still a District Court judge.

“Stated simply,” Jackson wrote, “the primary takeaway from the past 250 years of recorded American history is that Presidents are not kings.”

But Jackson, who was appointed to the U.S. District Court for the District of Columbia by former President Obama in 2012, wasn’t an automatic vote against the Trump administration.

In another 2019 case, Jackson rejected a challenge to the Trump team’s efforts to exempt itself from bedrock environmental laws to build a border wall between the United States and Mexico, dealing a blow to green groups enmeshed in a multipronged attack against the project.

“This Court finds that Congress has spoken in no uncertain terms about the limits of judicial review when it comes to legal claims that challenge on non-constitutional grounds the [Department of Homeland Security] Secretary’s authority to waive otherwise-applicable legal requirements with respect to the construction of border barriers,” Jackson wrote (Greenwire, Sept. 5, 2019).

Jackson handed down a smattering of other environmental rulings as a D.C. District Court judge.

In 2017, she struck down the Trump administration’s efforts to fast-track a review of its environmental analysis procedures in the wake of the Deepwater Horizon disaster (Greenwire, May 5, 2017). The following year, she ruled in favor of property owners’ challenge of a Fish and Wildlife Service map designed to protect a tiny endangered shrimp (Greenwire, Sept. 26, 2018).

Earlier in 2018, Jackson split the difference between timelines offered by environmentalists and the Trump administration’s EPA in a ruling that gave the agency an extension on past-due reviews of air standards for nine industrial sectors (Greenwire, April 4, 2018).

Jackson in 2018 penned an opinion in a Superfund case that last year made it all the way up to the Supreme Court — and survived the scrutiny of the bench’s 6-3 conservative majority.

The case dealt with a massive dump site that the U.S. military built in Guam during World War II, which the Navy used to dispose of Agent Orange and other munitions.

When the case came before the D.C. District Court, Jackson found that an earlier Clean Water Act settlement did not — as the federal government had argued — preclude Guam from claiming U.S. dollars to clean up the site under federal Superfund law.

“[T]here exists no formulaic means of determining when a particular settlement agreement has ‘decided, determined, or settled’ the ‘nature, extent, or amount’ of an entity’s liability … and, for present purposes, therein lies the rub,” Jackson wrote.

“Each superfund dispute is unique,” she continued, “and every settlement agreement comes about through individualized negotiations between parties who have idiosyncratic concerns that inform the final contents of the contract they create.”

The case went up to the D.C. Circuit, which reversed Jackson’s decision, finding that the 2004 Clean Water Act settlement had time-barred Guam’s Superfund claim, leaving the tiny U.S. territory to foot a massive $160 million cleanup bill.

Guam then brought its case to the Supreme Court, which agreed to add the dispute to its docket. At the briefing stage, Guam drew the backing of a bipartisan group of states.

Justice Clarence Thomas led the unanimous opinion last year that reversed the D.C. Circuit and aligned with Jackson’s finding that Guam’s argument was the better reading of federal Superfund law (Greenwire, May 24, 2021).

Aside from her race and sex, Jackson would also diversify the Supreme Court in terms of her legal experience.

She would be the first justice since Thurgood Marshall, who retired in 1991, to bring to the nation’s highest bench significant experience as a criminal defense attorney. That quality is among several that Biden has prioritized in his search for federal court nominees.

“With respect to each of these positions, President-elect Biden is eager to nominate individuals who reflect the best of America, and who look like America,” wrote White House counsel Dana Remus in a December 2020 letter to Democratic senators.

Before ascending to the federal bench, Jackson served on the U.S. Sentencing Commission, where she sought lighter sentences for drug convictions. Before that, she was an assistant federal public defender.

During her confirmation hearing last year to serve as a D.C. Circuit judge, Jackson recalled from her time as a public defender that she was often surprised to learn that her clients knew so little about the legal system. As a judge, she said, she sought to make sure to clearly explain proceedings to defendants.

The hearing last year illustrated that Jackson would be a “powerful nominee” to the Supreme Court, said University of Richmond law professor Carl Tobias.

“Jackson earned a well-deserved reputation as a very experienced, mainstream judge,” he wrote in an email.

The Harvard College and Harvard Law School graduate would also bring to the role experience before the Supreme Court.

In one of her stints in private practice at the firm Morrison & Foerster LLP, Jackson served on the team of lawyers that represented the toy company Mattel Inc. in a Supreme Court battle against its landlord for an alleged failure to follow environmental laws governing the cleanup of manufacturing discharges by prior tenants.

The Supreme Court in 2008 upheld an arbitration award in favor of Mattel.

Peter Hsiao, a partner at the firm King & Spalding, recalled working with Jackson on the case.

He said: “She was widely recognized as a rising star destined to achieve great things.”

Biden has said he wants the Senate to confirm Jackson within about 40 days of the nomination’s being sent over to Capitol Hill, a timeline that reflects the average for past court nominees (E&E Daily, Feb. 2).

If that goal is met, Jackson will likely face confirmation hearings in mid- to late March and then a vote by the full Senate before the chamber leaves for a two-week spring recess the week of April 4.

Senate Majority Leader Chuck Schumer (D-N.Y.), who said he has “no doubt” Jackson would make an “outstanding justice,” vowed a “fair, timely, and expeditious” confirmation. Without offering specific dates, Schumer said he would press for a Senate vote “immediately” after her Senate Judiciary hearings.

However, Minority Leader Mitch McConnell (R-Ky.) raised early doubts about whether he would support Jackson, noting that he had voted against her nomination for the D.C. Circuit Court last year. Since then, McConnell said, Jackson has only published two decisions, and one of them was reversed.

“I also understand Judge Jackson was the favored choice of far-left dark-money groups that have spent years attacking the legitimacy and structure of the court itself,” said McConnell, who promised a “rigorous, exhaustive review” of the nominee.

But Graham, who had pushed Biden to nominate South Carolina federal District Court Judge J. Michelle Childs, blasted the pick of Jackson, saying the “radical left won” and arguing that “media attacks” had derailed Childs. In the past, Graham has supported court nominees of Democratic presidents regardless of ideology.

Collins, meanwhile, seemed more open to Jackson. She called her an “experienced federal judge with impressive academic and legal credentials.”

Even if Jackson doesn’t win any Republican votes, Democrats can use their razor-thin 50-50 Senate majority — with Vice President Kamala Harris as the tie vote — to secure Jackson’s confirmation without any bipartisan support.

Justice Amy Coney Barrett, the court’s newest member and Trump’s third nominee, faced a bitterly partisan confirmation battle in 2020 after Republican Senate leaders moved swiftly to install her on the bench during the presidential election — despite having blocked former President Obama from making a similar move in 2016.

Barrett’s addition to the court solidified a 6-3 conservative majority, potentially for decades to come.

When Jackson was nominated to the D.C. District Court in 2012, she garnered support from a relative on the other side of the political aisle: former House Speaker and Republican vice presidential candidate Paul Ryan of Wisconsin.

On Twitter today, Ryan repeated the praise he gave Jackson during her District Court confirmation hearing: “Our politics may differ, but my praise for Ketanji’s intellect, for her character, and for her integrity, is unequivocal.”