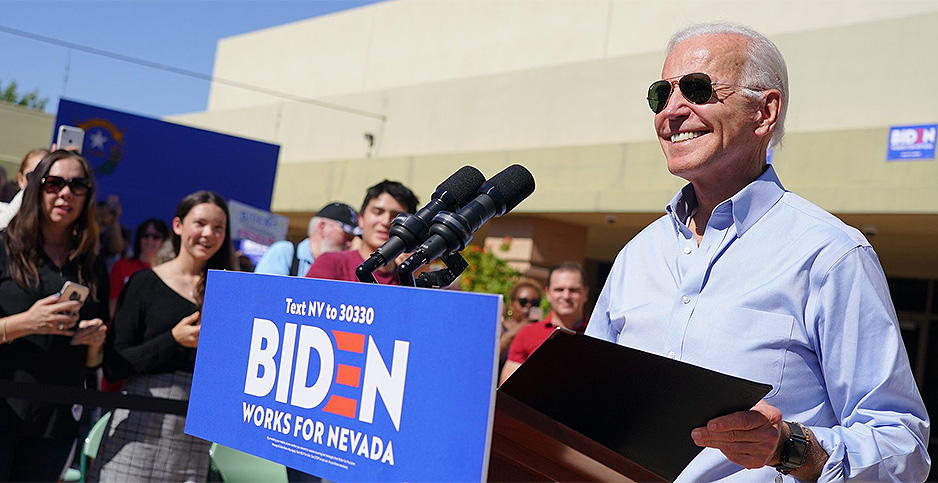 Democratic presidential candidate Joe Biden is proposing a $2 trillion plan to tackle climate change that would mean an influx of spending within the Department of Energy. Biden/Facebook

Democratic presidential candidate Joe Biden’s plan to tackle climate change includes a push to produce carbon-free energy by 2035 — a challenge that could make the Department of Energy the lead agency for those ambitions.

The Biden campaign has proposed a strategy that would include a $2 trillion accelerated investment in infrastructure, innovation and clean energy deployment over his first term, with a large down payment in his plans for a stimulus package aimed at pulling the economy out of the coronavirus pandemic-induced slump.

Should Biden get his way, that would mean an influx of spending within DOE across its grant programs for states, energy efficiency and renewables office, and other research and development efforts. Such spending requirements would need a massive increase in the department’s workforce and infrastructure.

"There is no question the ambitious Biden agenda presents real challenges for scaling up the governmental capacity to implement it," said Paul Bledsoe, who consulted on energy efficiency for DOE under President Obama and is a strategic adviser for the Progressive Policy Institute.

DOE’s operating budget has grown more than 25% under President Trump, in large part due to a massive nuclear weapons modernization strategy. DOE’s enacted budget for fiscal 2020 sits at $38.7 billion, although over half goes to weapons activities and related cleanup work.

The department was in a similar position at the outset of the Obama administration, as lawmakers infused billions of dollars and loan authorities into DOE as part of the 2009 stimulus package. Its response and ability to use the money largely earned positive marks, backers say.

"There is a very clear and strong body of evidence that with the right oversight, management and leadership, the department could execute on those type of one-time stimulus," said Joseph Hezir, the managing principal with the Energy Futures Initiative and a former chief financial officer within DOE.

The Trump administration, however, has routinely called for cutting major parts of the department, and although Congress continually replenishes its coffers, it has failed to fill all of its positions, even when it has the money.

It would take time for DOE to ramp up, particularly given its existing staffing challenges.

Congress has focused in the past year on a staffing shortage in the DOE division that oversees efficiency and renewables, questioning the administration’s commitment to bolstering new technologies.

Bledsoe noted that the Trump administration has "denuded" the Office of Energy Efficiency & Renewable Energy "rather purposefully."

But he noted there is an "immense cadre of young energy experts around the country now trained to address climate change."

DOE brass has acknowledged the frustration with staffing levels. Dan Simmons, the head of the efficiency and renewables office, testified before Congress in February that the government’s hiring process was "exhaustive."

Energy Secretary Dan Brouillette pledged last month that the department would do better, even as he told lawmakers that he was unhappy with some of the reasons DOE has been slow to fill positions.

Brouillette said he was told that routine steps such as providing employees with security badges were taking too much time, and in some cases the department had lost candidates with specialized skills to private competitors.

"It’s disheartening and disappointing, and we’ve taken steps to address very simple measures like that," he told lawmakers at the July 14 House Energy and Commerce Committee hearing.

"I don’t think it helps that in recent years the administration’s starting point for the DOE is always on the chopping block until Congress steps in and saves it," Mackler said. "Those sort of signals don’t help when it comes to building morale and recruiting."

Still, some DOE divisions have raised other worries, including at the fossil fuel division, a highly specialized, aging workforce that is nearing retirement and "increasingly eligible for retirement."

For example, only 17% of the workforce in the fossil fuel division is younger than 40 and 58% are 50 and older, according to the division’s latest strategic plan. It warns that in 2018, about 22% of the workforce was eligible for retirement and that over the next five years, another 21% would reach retirement eligibility.

The division plays a key role in research and development efforts into carbon capture technologies that may prove critical in the global fight to reduce climate warming emissions.

The staffing challenges could rear their head earlier into a Biden administration should a economic measure go forward as proposed by the campaign.

Biden has called for a significant investment in clean energy deployment and research and development as part of his stimulus plan, with as much as $200 billion being reserved for federal procurement purposes.

That could mean a sudden influx of cash at DOE, with bottlenecks to get it out and spent in a timely fashion.

One way to overcome that issue, said Arjun Krishnaswami, a policy analyst with the Natural Resources Defense Council, could be to structure the stimulus money to move through DOE’s state grant programs that would not require as much federal staffing intensity to move the money.

"One of the programs that we think should be part of a green stimulus is the state energy program, which could quickly, through formula grants, route money to the states to do their clean energy planning and development without needing … more capacity at the agency level in the near term," Krishnaswami said.

The pandemic itself may offer problems for a quick turnaround on some proposals, with construction or energy efficiency retrofits stymied by the need for social distancing.

That may require policymakers and the department to rethink their priorities for where to spend money compared with the previous 2009 stimulus, where home weatherization was a major emphasis of the Obama administration.

Rather than putting a majority of spending into home efficiency retrofits, money may be better reserved for commercial building improvements and public facilities upgrades, EFI’s Hezir said.

"The situation today is a little bit different because of COVID," Hezir said.

In addition to a DOE focus in pandemic planning, Biden has also made a sustained increase in research and development and deployment funding a central tenet of his approach to combating climate change.

That increased funding would occur over a more sustained period, but it would still mark a significant increase from current funding levels with stipulations for grander climate ambitions.

To achieve those goals, it may require DOE to deconstruct and build bridges across its complex and programs to better spend its money in a more climate-focused, coherent strategy.

Hezir said an innovation road map could help ease those boundaries and get the department moving in the same direction.

"I know there are expectations of large amounts of increased funding, but there will never be enough funding that everybody would like to see," Hezir said. "So there is going to have to be a much stronger element of planning and prioritization."

That may also include a "breaking down of organizational walls that currently exists because of DOE’s fuel-based organizational structure," he added, citing the crosscutting nature of some research, like that for hydrogen creation and uses.

Some observers, including the American Action Forum, a center-right policy institute, have warned that the agency would "simply duplicate the efforts of current government agencies" pointing to DOE’s Advanced Research Projects Agency-Energy (ARPA-E) — which Trump has routinely declined to fund but Congress has opted to save.

"While the threat of climate change has grown since the founding of ARPA-E, it is not helpful to create another agency with seemingly the same mission as one that already exists," wrote Ewelina Czapla, the forum’s director of energy policy.

Nick Loris, who monitors energy for the conservative Heritage Foundation, says the concept does appear duplicative. But he sees value in basic research and suggested DOE’s national laboratories can be "important catalysts" but that some projects are best conducted by the private sector.

"The national laboratories are huge assets both for knowledge and the potential for innovation, if structured the right way with guidelines," he said.