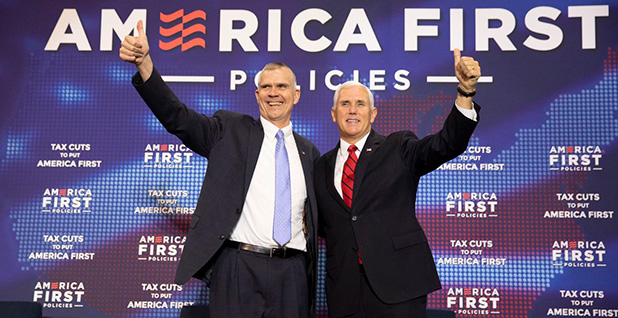 Private interests against public land: This divide, a bedrock political issue of the American West, is on full display in the Republican effort to unseat incumbent Sen. Jon Tester (D-Mont.).

The two largest private landowners in "Big Sky Country" are backing the campaign of Republican Matt Rosendale, a landowner and developer whose record shows close ties to, and consistent support for, business and industry.

On the other side, Tester’s top donor is the League of Conservation Voters. Re-electing the two-term incumbent has emerged as LCV’s primary project these midterms; he is the group’s top recipient by more than $100,000, according to data compiled by the Center for Responsive Politics.

Mark Squillace, professor of natural resources law at the University of Colorado Law School, said this alignment is not surprising but is consequential in Montana, a conservative state that still puts a premium on public land access.

Montana’s Stream Access Law is one of the most rigorous in the nation. All streams and rivers can be accessed by the public, regardless of who owns the streambed or whether the flow is navigable.

Tester has proved a firm defender of access. He co-chairs the Congressional Sportsmen’s Caucus and is backed by groups such as the National Wildlife Federation.

"If you think about hunting or fishing, what they resent most is the notion that someone is going to close off public land or streams, and the people who are most likely to do that are developers," Squillace said.

According to recently released campaign finance reports covering May 17 to June 30, these are exactly the kind of people filling in Rosendale’s coffers.

Keep it in the family

The Galt family is one of Montana’s top landowners. All total they own nearly 250,000 acres in the state. And they are backing the Republican.

Errol Galt, rancher and former state fish, wildlife and parks commissioner, and his wife, Sharrie, each contributed $2,700 to Rosendale’s general election campaign. Bill Galt, Errol’s brother, who helps manage the family’s enormous Martinsdale Ranch, maxed out his donations for both the primary and the general, giving $5,400. Wylie Galt (R), a state legislator, gave Rosendale $2,700 in the primary.

While they do not appear in campaign donations, Rosendale also has ties to the largest private landowners in the state, one step above the Galts.

Fossil fuel billionaire brothers Farris and Dan Wilks own nearly 359,000 acres in Montana. Originally from Texas, they founded a hydraulic fracturing company, Frac Tech, which they sold in 2011 for $3.5 billion. Their main holding is the famous N Bar Ranch in eastern Montana.

According to Montana Board of Oil and Gas Conservation documents, Interstate Exploration LLC — which is owned by Dan Wilks — has leased an oil well property owned by Rosendale’s company, MBA Consultants, since 2013.

Rosendale earns between $100,001 and $1 million in "rent/royalties" from MBA Consultants, according to personal financial disclosures submitted to the Senate in June. The asset is listed as a farm with a Glendive, Mont., address.

For years, the Wilks brothers have battled with outdoor recreation and conservation interests over public land access. Their N Bar Ranch encompasses a 2,700-acre Bureau of Land Management parcel known as Durfee Hills, and the brothers allow only limited public access to hunters, according to reporting by the Billings Gazette.

In 2016, the brothers illegally put up 9 miles of fence around Durfee Hills and had to pay restitution to BLM for encroaching on public land.

The area boasts some of the best elk hunting in the state. For years, the brothers have tried to push through a land swap with BLM that would give them Durfee Hills, a move that hunters and conservation groups bitterly oppose, claiming the land offered in return did not match the value of the prime hunting ground.

In September 2017, Interior Secretary Ryan Zinke met with the Wilkses and one of their top lobbyists to discuss the swap, The Guardian first reported.

The links between Rosendale and the Wilks family are the subject of a $990,000 television and digital ad campaign by LCV.

In an emailed response to questions, the Rosendale campaign described LCV as a "radical environmental group" that supports "President Obama’s job-killing Clean Power Plan" and the Waters of the United States rule, while opposing the Keystone XL pipeline and this year’s farm bill.

The campaign slammed Tester, who is a vocal advocate of campaign finance reform, for taking millions from the group over the years and benefiting from the group’s outside expenditures.

Rosendale’s campaign website states in all capital letters: "NO FEDERAL TRANSFER OF OUR PUBLIC LANDS."

But during a 2014 House bid, Rosendale campaigned on just that: transferring Forest Service and BLM land to the state while backing similar legislation as a state legislator. He touted the economic development opportunities of the plan.

"If we were able to manage and control those lands, we would be able to generate much more economic-development opportunities," Rosendale told the Gazette in 2014.

Rosendale responded to critics of his public lands record in an op-ed in the Billings Gazette published in April. In it, he acknowledged Montanan’s dedication to keeping open access to public lands.

"I’ve listened to the people of Montana and they mean business about protecting our public lands, opposing a federal lands transfer, and responsibly expanding access and recreational opportunities — and I completely agree," he wrote.

He also stressed more local and state management of these lands to prevent wildfires.

Push and pull between private landowners and federally managed lands goes back more than a century, according to John Leshy, Interior’s top lawyer during the Clinton administration.

"This is a dynamic that goes back a very long way, back to the period in the 19th century when most of them were set aside," said Leshy, who is writing a book on the political history of public lands (Greenwire, March 15). "It’s a current that runs through a lot of the West."

The Montana race, he said, will be an interesting test case. Trump won the state by 20 percentage points in 2016, but a June poll by the Center for Western Priories shows 49 percent of voters disapproving of the administration in public lands and parks issues, compared with 30 percent in approval. The online survey sampled 500 Montanans with a 2-point margin of error.

"It is a kind of bellwether since the candidates have these different histories," Leshy said. "It brings a lot of things into focus."

Rosendale loaned his campaign money during an unsuccessful House bid in 2014, and the race ended with an outstanding $237,000 loan.

The Daily Beast first reported that Rosendale’s 2018 campaign was asking donors who had already maxed out to contribute to paying back the 2014 debt.

Those donations from nine contributors totaled $32,831, which went to the 2014 campaign committee. The committee paid Rosendale’s personal bank account to pay back the 2014 loan. The next day, Rosendale loaned the exact same amount to his 2018 Senate campaign, campaign finance documents show.

Experts say this does not violate campaign finance law, as long as the donors did not know the money would be routed to the Senate campaign.

"If the donors were told they were helping pay down Rosendale’s 2014 loan to his campaign, there is little stopping Rosendale from turning around and putting his repaid 2014 loan back into his 2018 campaign," Brendan Fischer of the Campaign Legal Center wrote in an email.

"But it has the effect of allowing a handful of wealthy donors to give up to $8,000 to Rosendale’s campaign when the legal limit is $5,400," Fischer said.

The pattern continues in the most recent documents. More than a dozen donors who have already reached the contribution limit gave nearly $35,000 to the 2014 campaign account for the listed purpose of paying off the remaining debt. They include former Occidental Petroleum Corp. CEO Stephen Chazen.

The filings for May and June do not show any further loans from the candidate to the campaign. Rosendale’s campaign did not respond to a question about the donations.

The donations to Rosendale’s 2014 campaign "do not violate the letter of the law, but common sense tells us this is an end around the spirit of the law," said Sheila Krumholz, executive director of the Center for Responsive Politics.

"At the end of the day, it’s legal," she said. "And if voters don’t like it, they can do something about it."