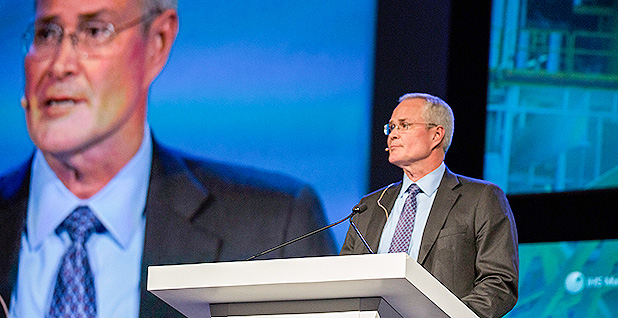 HOUSTON — On the opening day of the biggest annual conference of energy executives, the chief executive of the biggest U.S. oil producer held forth on tax and trade policy.

Exxon Mobil Corp. CEO Darren Woods didn’t mention President Trump, but he came down clearly on the side of free international trade and against some of the administration’s proposals on protective taxes.

"Policies in the forms of subsidies, mandates and trade barriers only hinder progress," Woods told the 3,000 attendees at the annual CERAWeek conference by IHS Markit Ltd.

"They are more expensive and lead to poor investment decisions focused on the limitations imposed, not true innovation," he said.

The second and third days of the conference featured the heads of the No. 2 and No. 3 oil producers — Chevron Corp. and ConocoPhillips Co. — also talking about tax policy. Chevron CEO John Watson, who supports most of Trump’s plan to overhaul the tax system, said a border tax could harm U.S. consumers by raising prices.

"I want to see the U.S. be more competitive, not burdening imports," he said yesterday.

While the oil industry has generally supported Trump, the Big Oil executives gathered here — along with the utility and refining industries — are quietly staking out differences with the administration on a variety of issues, most notably taxes and trade policy.

Trump campaigned on a promise to rewrite the North American Free Trade Agreement and other trade pacts, and revive American manufacturing by punishing companies that moved jobs overseas. He also made a string of disparaging comments about Mexico and has ordered federal agencies to start planning for a wall along the United States’ southern border.

To be sure, Trump could be a boon to the oil industry, Chevron’s Watson and other speakers said. The new administration has already fast-tracked two oil pipelines that the Obama administration blocked, and it has begun rolling back regulations on methane emissions from oil and gas facilities and backed away from Obama’s aggressive stance on climate change.

The whole economy is starting to respond, said Harold Hamm, the CEO of Continental Resources Inc., pointing to the roughly 10 percent growth in the stock market since the election.

"You get the government’s foot off business, and it’s going to respond," he said.

But big parts of Trump and the GOP’s plan — particularly the border adjustment tax — would put a burden on the energy industry, where companies increasingly buy, sell and build across international borders.

The tax proposal, still unclear and evolving, would work like the value-added tax (VAT) common in Europe and East Asia and permitted under the World Trade Organization. VAT is collected at each step in a manufacturing process but rebated if the final product is exported. It’s also applied to imports.

Republican leadership in Washington is seeking to pay for possible large corporate tax cuts with a similar system that rewards exports and applies new taxes on imports. The idea has long been viewed with hostility by many in Washington as potentially too disruptive to an economy heavily reliant on foreign imports, including energy.

"I don’t think there’s been any time in industrial history where protectionism works in the long run," Tom Fanning, CEO of Southern Co., an owner of electric and gas utilities, said during a Tuesday session here.

Southern imports almost all its nuclear fuel, and the border adjustment tax would raise the price, Fanning said.

The economics of the border tax are even more complicated in other areas. Charif Souki, who built the first plant to export liquefied natural gas in the Lower 48 states as head of Cheniere Energy Inc., is working on another plant with his new company, Tellurian Inc.

The plant will use turbines made in Cincinnati that are then assembled into compressors in Florence, Italy, and flown to a site in Louisiana.

"I’m not sure where you assess a tax on that," Souki said during a press conference.

In the refining sector, the border tax could give an advantage to companies on the U.S. Gulf Coast that use more domestic oil and could harm refiners on the East Coast that use imported oil, said Mario Rodriguez, president of NTR Partners LLC.

More broadly, the oil industry leaders are concerned about Trump’s stance toward Mexico.

The United States exports about 3.6 billion cubic feet of natural gas a day to Mexico, according to the U.S. Energy Information Administration. And Mexico sells 500,000 barrels of oil daily to the United States while importing gasoline and other fuels.

At the same time, Mexico has begun to open its state-controlled oil fields to outside investors, which could be a boon for U.S. companies (Energywire, June 27, 2016).

"These changes are here to stay," he said.

Regardless, the energy industry in North America was moving toward further integration before Trump’s election. Mexico is being tied closely into the U.S. natural gas pipeline system, and there’s an expectation that electricity will eventually be integrated between the United States and Mexico. The United States and Canada already have tightly woven power and gas markets.

Having just won the right to invest in Mexico and export U.S. crude oil, energy companies are hoping to convince leaders in Washington to not shift North American energy trade and integration into reverse.

"We’ve got to keep great relationships with Mexico and not overturn NAFTA too bad," said Scott Sheffield, executive chairman of Pioneer Natural Resources Co., during a panel discussion Tuesday.