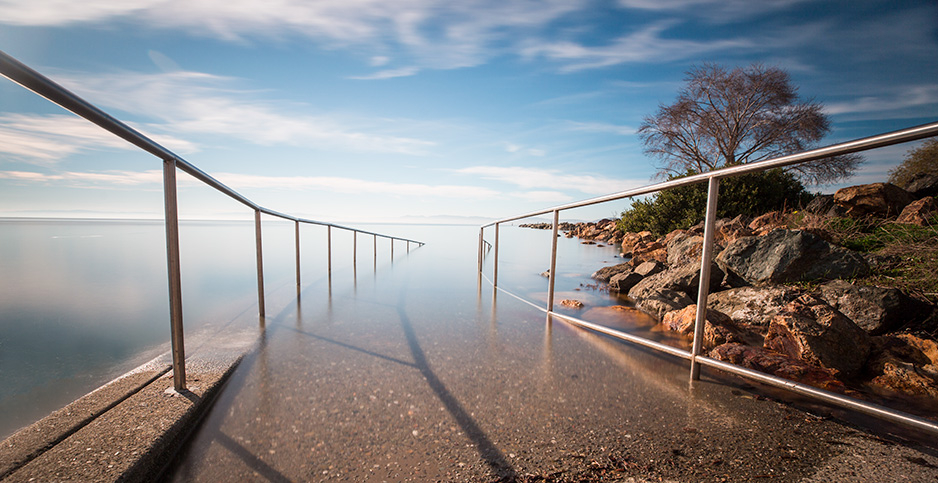 King tide rises in Alameda, Calif. Oil companies lost two appeals in climate damages lawsuits led by California cities and counties after a panel of the 9th U.S. Circuit Court of Appeals said the companies failed to prove why the cases belonged in federal court. eb78/Flickr

A panel from the 9th U.S. Circuit Court of Appeals said that attorneys for oil companies failed to show why San Mateo County and Oakland could not pursue state court battles for industry compensation for climate change impacts, such as sea-level rise.

"We hold that the state-law claim for public nuisance does not arise under federal law," Judge Sandra Ikuta wrote in the Oakland opinion.

At issue were two climate lawsuits brought by a slew of California cities and counties against oil companies like Chevron Corp., Exxon Mobil Corp. and BP PLC.

The cases — which both seek to hold companies financially responsible for misleading the public on climate change consequences — were heard by the same 9th Circuit panel earlier this year. The appeals court was tasked with resolving split decisions from the U.S. District Court for the Northern District of California (Climatewire, Feb. 6).

Ikuta, a George W. Bush appointee, and the rest of the three-judge panel affirmed the district court’s 2018 decision to throw the San Mateo case back to a state venue and revived the Oakland climate case for more proceedings in district court after the same bench — but a different judge — scrapped the case that same year.

Both of the lawsuits are now closer to state court proceedings, despite attempts by the fossil fuel industry to keep the litigation in federal venues where a judge could rule that the municipalities’ claims are preempted by the Clean Air Act.

Local officials from the California cities at the heart of the battles lauded the decisions.

"We will continue to hold these companies accountable for their decades-long campaign of public deception about climate change and its consequences."

Attorneys for the oil supermajors have turned to the Supreme Court multiple times during the venue disputes, including over the recent decision to allow a climate lawsuit filed by Baltimore to proceed in the city’s circuit court (Climatewire, April 2).

The 9th Circuit decisions underscore the need for the high court to weigh in on whether climate damages cases can even be brought to the courts at all, said Phil Goldberg, special counsel for the Manufacturers’ Accountability Project.

"Selling us the energy we need to power our homes, businesses and communities is not unlawful and, therefore, not a subject for tort liability in any court," he said.

Exxon is reviewing the decision and evaluating its next steps, said a spokesperson for the company.

"These claims seek to penalize the production of affordable, reliable and ever cleaner energy, which for decades has been authorized and encouraged by law and government policymakers," he said.

The decision takes municipalities a "big step closer" to success, said Ann Carlson, a UCLA law professor who has also consulted for challengers in some of the cases.

"California has very favorable nuisance doctrine for the plaintiffs," she said. "The closer plaintiffs get to being able to collect evidence and present it to a court, the stronger the likelihood that at least one of the cases succeeds."

The 9th Circuit’s decisions also carry advantages for other climate cases that are just getting off the ground, said law professor Maxine Burkett of the University of Hawaii, Mānoa.

"The decision also allows recently filed cases — like those by Honolulu and Maui — to proceed with greater confidence that time and resources won’t be wasted determining the proper court," she wrote in an email. "These are state and local concerns."

San Mateo, Marin and Santa Cruz counties, as well as the cities of Imperial Beach, Richmond and Santa Cruz, said they "look forward" to finally testing the waters in California courts.

"The Californians we represent will have a chance to present the facts about what the defendants knew about the climate change-related dangers their fossil fuel products pose … and why those companies should be held accountable for the costs of surviving climate change," the municipalities said in a statement issued after the 9th Circuit decisions.