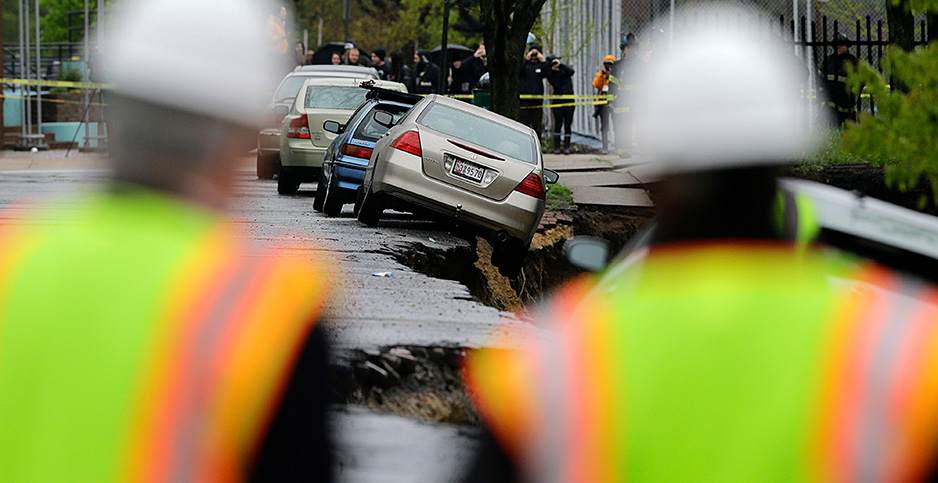 A Baltimore street collapsed into a sinkhole after severe storms and flooding ripped through the city in 2014. The city is suing oil companies in an effort to make them pay for damages related to climate change. Associated Press

The outcome of a Supreme Court battle between Baltimore officials and Big Oil over climate change impacts could reverberate in courtrooms across the country, legal experts say.

As the high court deliberates its ruling in BP PLC v. Mayor and City Council of Baltimore, a host of other lawsuits aimed at holding the fossil fuel industry liable for the local effects of global warming are slogging through preliminary procedural battles. The Supreme Court’s decision has the potential to further delay — or derail — those cases.

"I think this is an instance where there are many ways the oil companies can win partly or win big," said William Buzbee, a professor at Georgetown Law, at a recent webinar hosted by the D.C. Bar.

"And if they lose, they’re back where they started," Buzbee added.

In 2018, Baltimore officials filed a landmark lawsuit seeking compensation from 26 fossil fuel firms for their role in causing climate change and its effects, including extreme heat and flooding. Dozens of similar cases have been filed by state and local governments across the country.

When the Supreme Court said it would hear Baltimore’s case last year, it only agreed to consider the narrow technical question of whether federal appeals courts can review the entire scope of remand orders that have sent climate cases like Baltimore’s back to the state courts where they were originally filed.

But in a bold bid, lawyers for the fossil fuel companies asked the justices to save time and find that all disputes related to interstate greenhouse gas emissions belong in federal court. Embattled oil and gas supermajors have been fighting for years to keep such cases in federal benches, which are seen as a more favorable venue for the industry.

The Supreme Court heard arguments in the case last month and is expected to reach a decision by early summer (Climatewire, Jan. 20).

Buzbee, who spoke at the D.C. Bar webinar shortly after the Super Bowl, compared the oil and gas companies’ request to a "Hail Mary" pass in football — typically a very long pass made in desperation with little chance of success.

"I think it’s unlikely BP would get the big Hail Mary touchdown. It just doesn’t seem to me the court would rule authoritatively on the question of whether this is exclusively federal jurisdiction here," Buzbee said.

But "if the Supreme Court drops in a little language in about this seeming federal, even if it’s just hinting in that direction, then courts below may rethink the law," he added. "Or if [industry attorneys] can get some dissenting opinions on this, they might get some language they can work with."

Karen Sokol, a law professor at Loyola University in New Orleans, agreed that the justices could insert language about the case raising federal issues into concurring or dissenting opinions.

Especially useful for the fossil fuel firms, she said, would be a reference to the 2011 Supreme Court case American Electric Power Co. Inc. v. Connecticut, in which the justices unanimously ruled that corporations cannot be sued for greenhouse gas emissions under federal common law.

"A reference or two to AEP could be really useful," Sokol said, "and could also be a sign that they’d be willing to revisit the issue down the line."

Soon after Baltimore filed its lawsuit in 2018, lawyers for Chevron Corp. removed the case from a state court to a federal bench.

"Among other things, Defendants have acted pursuant to government mandates and contracts, performed functions for the U.S. military, and engaged in activities on federal lands pursuant to federal leases," they wrote.

But a federal district court later rejected that argument and sent the case back to the state bench where it was first filed. On appeal, the 4th U.S. Circuit Court of Appeals affirmed that the case belonged in state court.

Importantly, the 4th Circuit found that it only had jurisdiction to consider the federal officer issue, not other potential reasons for putting the case in federal court.

The question has split circuit courts, with some adopting the same narrow scope of review as the 4th Circuit, while others have taken a broader scope of review in cases involving federal officers.

In their petition to the Supreme Court, lawyers for the oil and gas companies called the Baltimore case the "ideal vehicle for resolving an entrenched conflict" among circuit courts.

Sokol of Loyola University expressed concern that the oil and gas companies were attempting to use a relatively rare issue to bump the Baltimore case — and others like it — to a friendlier federal venue.

"The reason federal officer removal is an exception is because it’s rare," she said. "So going on to conclude this would have the potential for a very narrow exception to swallow the rule and allow for wide-ranging federal review."

‘Sitting in the wings’

Baltimore’s case is hardly the only lawsuit that seeks fossil fuel industry compensation for the local impacts of a warming planet.

The complaints rely on a combination of state trespass, consumer protection and public nuisance laws to target individual oil companies, as well as trade associations like the American Petroleum Institute.

Energy companies have filed petitions asking the Supreme Court to review lower courts’ jurisdictional decisions in a number of the lawsuits, including those brought by Rhode Island, San Mateo County in California and three local governments in Colorado.

Meanwhile, the Manufacturers’ Accountability Project, an initiative of the National Association of Manufacturers that aims "to push back on abusive litigation campaigns," has repeatedly blasted the lawsuits as frivolous.

Phil Goldberg, special counsel for the Manufacturers’ Accountability Project, said he hopes the Supreme Court decides the Baltimore case in the vein of AEP.

"I think what we’re hopeful for is … that it speaks a little bit to the larger litigation, just like in AEP v. Connecticut, where they said that these are national legislative issues and it’s inappropriate for judges to be deciding energy policy on a case-by-case basis," Goldberg said.

"There are other cases that are kind of sitting in the wings," he added. "And how the court rules here could very much impact where those cases go."

David Bookbinder, who is on the legal team representing the three Colorado governments — the city of Boulder, Boulder County and San Miguel County — in their lawsuit against Exxon Mobil Corp. and Suncor Energy Inc., said he’s closely watching the outcome of the Baltimore case.

"If Baltimore wins, that’s fine; we just stay where we are," said Bookbinder, chief counsel at the Niskanen Center, a libertarian-leaning think tank.

"If Baltimore loses and the court says courts of appeals have to hear all these things … that would make things a much more difficult situation," he added. "Not impossible, but simply more difficult."

The Colorado lawsuit will proceed in Boulder District Court after a state judge rejected Suncor’s request to move it to Denver earlier this month.

Farther west, a federal judge earlier this month sent a pair of climate liability lawsuits from two Hawaii cities — Honolulu and Maui — back to the state bench from which they came.

Judge Derrick Watson of the U.S. District Court for the District of Hawaii soundly rejected the fossil fuel companies’ claims. The Obama appointee concluded that there is "no basis for federal jurisdiction" over the cases.

Chevron is appealing those rulings in the 9th U.S. Circuit Court of Appeals.

Even if the Supreme Court hands them a loss, oil and gas companies have already succeeded in delaying the Baltimore case and others like it.

"It has been over two years since the City of Baltimore filed our case. Two more years of increased climate change damage to our city, and two more years of mounting costs to our taxpayers," Baltimore acting Solicitor Dana Moore said in a recent statement.

In addition to facing higher costs from climate damages, Baltimore and other challengers have been unable to enter the discovery phase, in which they could uncover more information about oil companies’ early knowledge of climate change.

Investigative reporting by Inside Climate News and the Los Angeles Times has revealed that Exxon privately warned about the dangers of global warming in the 1970s but publicly denied the scientific reality for decades.

"I have no doubt that the industry is going to continue to fight like crazy and spare no expense to keep this wrapped up in the procedural stage and prevent it from going to discovery, where we will learn even more about what the industry knew and when it knew it," Sokol said.

Buzbee of Georgetown Law sought to compare the fossil fuel firms to the four largest U.S. tobacco companies, which downplayed the dangers of smoking cigarettes for decades before reaching a multibillion-dollar settlement with the attorneys general of 46 states.

"If I were one of these [oil] companies, I would definitely consider coming clean, getting out in front of it … and trying to earn some goodwill and credibility," Buzbee said in a phone interview.

"But so far," he continued, "they’ve acted more like the tobacco companies, who for decades fought tooth and nail to keep damaging documents from seeing the light of day."