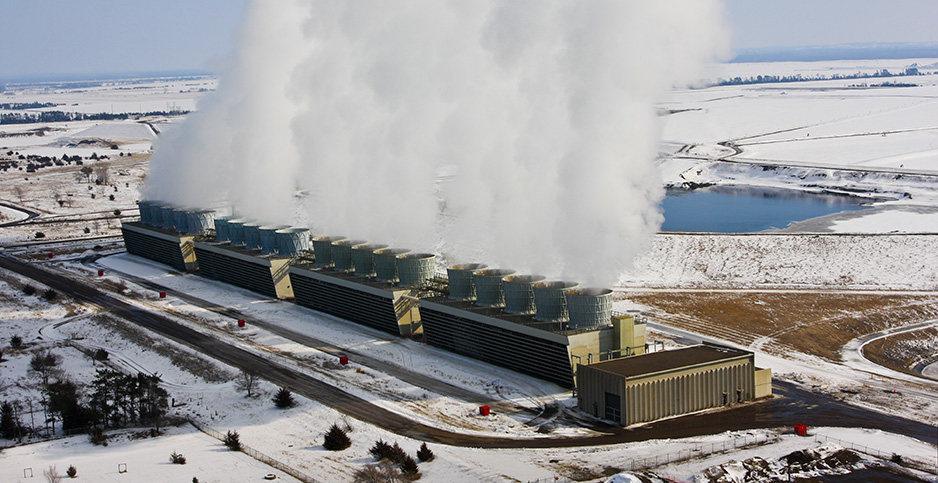 Places like Chicago’s Magnificent Mile or the glittering Lake Michigan shoreline come to mind as the Midwest’s most sought-after real estate.

But in the world of solar energy development, the unlikeliest of places — bedroom communities outside Cedar Rapids, Iowa, and Minnesota’s Twin Cities — have become the region’s hot properties.

That’s because the small Midwestern cities host hulking "baseload" power plants that have either recently shut down or will be retired soon, leaving valuable access to an increasingly congested power grid.

Just the right to interconnect a renewable energy project to the Midwestern grid can be worth hundreds of millions of dollars. So when legacy coal or nuclear plants are taken offline, there’s a huge incentive to reuse the sites for the next wave of large-scale power generation: big solar.

For all the forces working to speed up the shift away from fossil fuels — political will in Washington, declining wind and solar costs, and increasing renewable energy demand among consumers — one of the chief obstacles remains: getting projects through the interconnection process and plugged into the grid.

It’s a reason why companies like NextEra Energy Resources and Xcel Energy are developing some of the Midwest’s largest solar projects at or near sites that already host large power plants.

While doing so can help communities like Palo, Iowa, and Becker, Minn., replace some of the tax revenue that will be lost when plants are shut down, the siting decisions are principally driven by existing access to the grid.

There are few larger coal plants in the Midwest than Xcel’s Sherburne County power plant in Becker. The so-called Sherco plant’s three generating units, which went online in the mid-1970s, can collectively produce almost 2,300 megawatts.

But like many of its coal-fired peers, Sherco is approaching end of life in part due to the eroding economics of the fossil fuel and worry about its climate-warming emissions.

Xcel will shut down the plant in phases, starting with Unit 2 in 2023, and plans to replace some of the energy with a 460-MW solar farm that will flank the site, spanning some 3,500 acres.

Chris Clark, president of Xcel’s Midwestern utilities, said several key factors influenced the decision of where to locate what would be Minnesota’s largest solar project, a $500 million-plus investment.

The timing was driven by state regulators’ request for clean energy investments that could accelerate the state’s economic recovery from the COVID-19 pandemic. The solar farm is among $3 billion of investment proposed by Xcel (Energywire, June 18, 2020).

But the decision to put it at the Sherco site was largely dictated by the availability of 700 MW of transmission rights.

"Being able to take advantage of the interconnection, obviously, that’s an asset that we want to reuse to benefit our customers," Clark said in an interview. "It also allows us to move quickly [to] be able to bring this solar energy online … and matches up well with our desire to continue to work with the host community of Becker and Sherburne County."

While interconnection rights are lucrative anywhere on the grid, they’re especially precious in the Upper Midwest.

In states like Minnesota, Iowa and parts of the Dakotas, planned solar and wind projects — even those far enough along to have signed agreements to sell their energy — are having to withdraw from the Midcontinent Independent System Operator’s "queue" because the grid is too congested, and the cost of transmission upgrades to bring projects online can be hundreds of millions of dollars, matching or exceeding the cost of the renewable energy projects (Energywire, Jan. 27, 2020).

Not only can it be expensive to plug into the bulk power grid, but it also takes years to get through MISO’s interconnection process. And for energy developers looking to capitalize on an ever-growing appetite for carbon-free energy, time is money.

"You’re talking about a three- to four-year difference," he said. "That, to a developer, is gold."

Xcel’s petition to the Minnesota Public Utilities Commission for regulatory approval of the Sherco solar project makes that point.

The company notes that MISO’s interconnection planning process is "mired in delays," with project studies running more than a year behind schedule due to the large volume of requests.

What’s more, interconnection rights are "use them or lose them," and the utility will forfeit the rights associated with Sherco Unit 2 if it doesn’t reuse them by 2026.

The utility estimates that will cost customers as much as $350 million in transmission upgrades to connect a solar project elsewhere on the grid.

The same rationale is behind another Minnesota utility’s decision to develop a smaller solar project at the site of another coal plant.

In March, Otter Tail Power got PUC approval for a 50-MW solar project at the site of the Hoot Lake coal plant.

Otter Tail noted in its petition to the PUC that "one of the most important features of the Hoot Lake Solar Project is the ability to utilize existing interconnection rights associated with the Hoot Lake Coal Plant that is being decommissioned in 2021."

In Iowa, renewable giant NextEra isn’t as explicit about why it chose to put its massive 690-MW solar and battery storage project at the site of the recently retired Duane Arnold nuclear plant.

The Juno Beach, Fla.-based company didn’t respond to a request for an interview. But those familiar with the project said it’s no mystery why it is being planned there.

And a filing with the Iowa Utilities Board notes that the project, which will cover 3,500 acres around the Duane Arnold site, is "in close proximity to a transmission interconnection."

The land required for thousands of acres of solar arrays dwarfs the real estate needed for a coal or nuclear plant, requiring the developer to secure agreements with surrounding landowners.

NextEra hosted a Zoom meeting to give an overview of the Duane Arnold project in March, answering questions from landowners on a variety of topics such as how hosting solar panels will affect their property taxes.

The renewable energy giant has also engaged critics and skeptics on a Facebook page, including video updates from the company official in charge of the project.

The outreach hasn’t quieted opponents from lashing out.

"Keep our rural areas rural," one Facebook commenter wrote last month. "We don’t want our countryside filled with these toxic-filled solar panels and visual pollution. They would destroy the aesthetics of our rural views. There are miles of roof tops in big cities that could be home for these solar panels."

Renewable developers like NextEra have countered local opposition largely by stressing the economic benefits of projects.

In the case of Duane Arnold, the $700 million solar project will produce $50 million in landowner payments, more than $40 million in tax revenue and 300 construction jobs, the company said.

Similarly, Xcel said the Sherco solar project will generate $115 million in wages from almost 900 union construction jobs, and more than $240 million in local benefits, including landowner payments and taxes.

In addition to the solar development, Xcel is planning a 750-MW combined-cycle natural gas plant at the Sherco site in the middle of the decade — a sore spot with climate advocates, who are pushing the utility to forgo further fossil fuel investments.

From an economic perspective, Xcel has made clear that the solar and gas projects won’t completely make up the jobs and tax base that will go away when Sherco shuts down.

"There is an impact to the community," said Clark, the utility president. "I don’t want to downplay that."

The reuse of the Sherco site and reinvention of Becker, which gets 74% of its tax revenue from the plant, have been viewed by some as a regional and national model of how a community dependent on a coal-fired plant as a source of jobs and taxes can evolve as the nation shifts from fossil fuels.

Helping Becker and other communities affected by coal plant closures has also been a stated priority of Minnesota Gov. Tim Walz (D) both in his home state and regionally as chair of the Midwestern Governors Association.

Clark said the Sherco solar project can play a key role as the state moves to clean energy.

"It’s part of showing that this transition that we’re in can actually be good for host communities," he said.