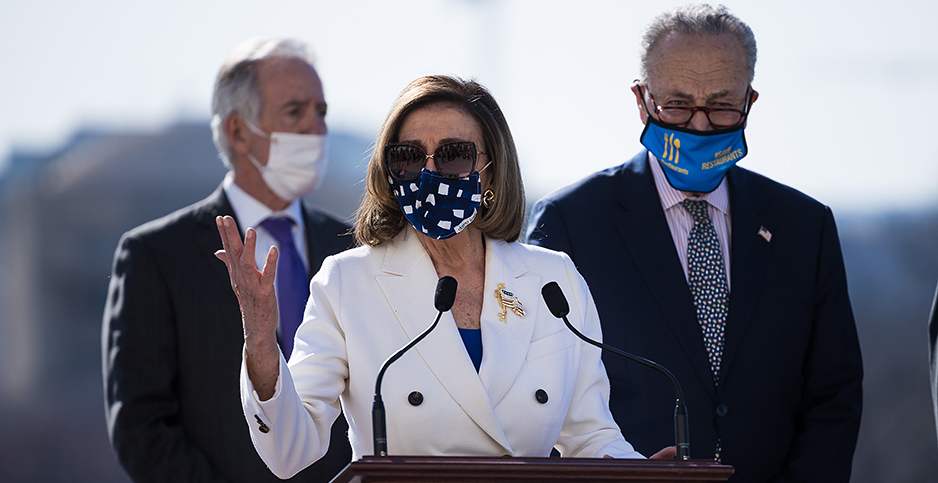 Environmental groups are calling for massive spending on an infrastructure package they view as a generational opportunity to address climate change, ramping up pressure on Democrats to deliver on campaign trail promises on clean energy and environmental justice.

As Democrats call for bipartisanship and Republicans demand a narrower and cheaper bill, greens will be warning the new congressional majority against giving in to GOP demands.

That tension came to a head yesterday when reports emerged in The New York Times and The Washington Post that White House aides were working on an ambitious $3 trillion infrastructure legislative effort encompassing climate, taxes and income inequality.

"At this point, [President] Biden should realize that if his proposal is milder than what Joe Manchin is calling for, it does not go far enough," Sunrise Movement spokesperson Ellen Sciales said in a statement yesterday.

It was a peek into the political forces Democrats face from the left as they begin work on President Biden’s "Build Back Better" agenda. Environmentalists see infrastructure as an unprecedented opportunity to address climate change, juice the clean energy transition and make progress on environmental justice priorities.

Green groups have offered up a flurry of policy reports and ramped up their public advocacy in recent weeks, with congressional Democrats turning in earnest to an infrastructure and economic recovery package widely expected to tackle a host of progressive policy priorities.

Talks on Capitol Hill remain in the early stages. Democrats have stressed bipartisanship but have not ruled out passing a large package via budget reconciliation, which would allow them to skirt Republican filibusters in the Senate.

The GOP, meanwhile, remains almost entirely opposed to additional spending that falls outside the scope of roads, bridges and highways (E&E Daily, March 22).

There’s talk about splitting up the package into two separate bills, as top lawmakers have suggested, with significant spending on climate issues.

Broadly, that’s an approach that could work for the environmental community, but there is considerable hand-wringing about just how big the package should be.

Progressive green groups like the Sierra Club and the Sunrise Movement are pushing for roughly $1 trillion in annual spending over a decade to implement the "THRIVE" agenda, a broad set of ideas endorsed by many congressional Democrats to tackle climate change, COVID-19 and racial inequality. "THRIVE" stands for transform, heal and renew by investing in a vibrant economy.

It would be an unprecedented spending spree that would go well beyond even the gargantuan stimulus efforts Congress has enacted to battle the pandemic over the past year.

The Sierra Club made a case for it in a report earlier this month, which argues that such an investment could generate more than 15 million jobs and put the United States on a path to reduce greenhouse gas emissions 45% by 2030.

"The pandemic has laid bare the links between the long-standing, mutually reinforcing crises that our society faces, such as racial and economic injustice, pollution, health vulnerability, and climate change," Beachy said.

‘Time for Congress to deliver’

While environmental groups have differing ideas about which policies to prioritize and how to push them through a closely divided Congress, greens are almost universally advocating investment-oriented legislation that strays from their emphasis on standards, regulation and carbon pricing in years past.

"Democrats know that Biden campaigned and won on a bold $2 trillion climate investment package, and now is the time for Congress to deliver," said Becca Ellison, policy manager at Evergreen Action. "I think the appetite is there."

It suggests pairing a clean electricity standard that shoots for 80% clean energy in the power sector by 2030 and 100% by 2035 paired with investing hundreds of billions of dollars in clean energy research, development and incentives.

The League of Conservation Voters joined with Climate Power and the Potential Energy Coalition last week to roll out an advertising effort worth more than $10 million to push for Democrats to go big on environmental priorities in the infrastructure bill (Greenwire, March 16).

"This infrastructure package is our best, last chance of making sure that we tackle the climate crisis. It alone won’t do everything," he told E&E News, listing regulations on auto emissions and methane as some actions Biden should take.

"But we think a massive climate infrastructure investment package would be huge to do something about this problem," said Davis, "and to do it in a way that can make family-sustaining jobs and reversing inequities in our society."

LCV is also in discussions about how a clean energy standard might fit into the bill. "We should be ready to do that, if we are able to build a coalition necessary to do so," Davis said.

"When it comes to meeting the administration’s bold commitment to getting to 100% clean electricity by 2035," he said, "a clean energy standard will be an important piece of that."

The Natural Resources Defense Council isn’t targeting a specific cost for the bill. But the group is asking for the legislation to do a lot: Put the nation on a trajectory to slash emissions, get its infrastructure ready for decades of climate impacts, pull it out of the economic depression and more.

"We want to see something bold, something big, something comprehensive and inclusive of the challenges of this moment," said Stephanie Gidigbi Jenkins, NRDC’s director of policy and partnerships and its lead staffer on infrastructure.

"The biggest piece is just addressing the inequities built into our infrastructure system overall, making investments that will cut carbon pollution, and build in a way that ensures that we don’t leave our investments vulnerable to severe weather conditions," she said.

The green wish list could be difficult to pull off, with Manchin and other Senate moderates controlling much of what will pass.

There are also questions about what, exactly, could get done through reconciliation. For instance, the surface transportation reauthorization bill, a priority for lawmakers on both sides of Capitol Hill, is likely to have policy provisions that won’t pass muster with the "Byrd rule" that controls reconciliation.

But even if the legislation that emerges doesn’t ultimately invest $1 trillion annually, the "THRIVE" agenda and other green priorities could have sway.

Senate Majority Leader Chuck Schumer (D-N.Y.) has explicitly endorsed "THRIVE," and Interior Secretary Deb Haaland was the lead House sponsor of the resolution as a member of the House, giving it an advocate in the Biden administration.

"This is not just a Sierra Club thing," Beachy said. "This is a plan backed by over 100 members of Congress and hundreds of the nation’s largest union, racial justice, climate and other grassroots groups."

Generally speaking, moderate green groups are on board with an aggressive spending agenda, as well, and the private sector increasingly favors federal policy that could help its own transition to clean energy.

Environmentalists, including the National Wildlife Federation, joined with the U.S. Chamber of Commerce earlier this year to call for an infrastructure package by July (E&E News PM, Feb. 17).

"And the only voices standing up on the train tracks and saying ‘nope’ are Republicans in Congress."