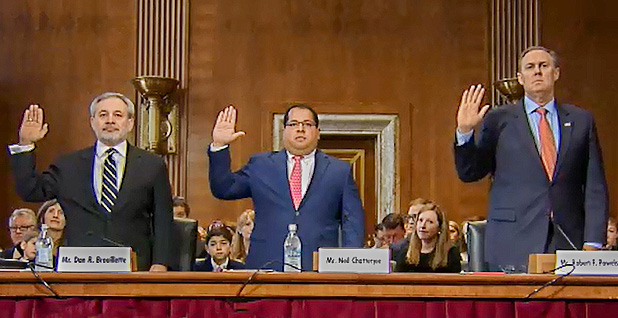 President Trump’s bold plans for overhauling the Department of Energy have been hamstrung so far by a lack of nominees for key DOE posts.

There are three Trump DOE nominees for 19 Senate-confirmed positions, far off the pace of the two previous administrations at their five-month mark. Energy Secretary Rick Perry is the only confirmed Trump pick, with David Jonas, the general counsel nominee, and Dan Brouillette, for deputy secretary, awaiting Senate approval.

At this point in his presidency, Barack Obama had sent 11 nominees to Capitol Hill with eight confirmed. And George W. Bush had sent seven with six confirmed.

Trump’s pace is getting attention because of big changes the president had promised for DOE and a proposed department budget that calls for deep cuts in spending and the potential for hundreds of layoffs or buyouts. Staffing up the department will be complicated by the Senate calendar and the time needed to vet potential DOE leaders.

Jeff Navin, a DOE deputy chief of staff during the Obama administration and co-founder and partner at Boundary Stone Partners, said vacancies are already posing operational challenges and pointed to the slow pace of grant approvals coming out of the Advanced Research Projects Agency-Energy (ARPA-E).

"The department does billions of dollars in business every year. They cannot funnel all of that through a handful of political appointees in the secretary’s office," Navin said. "The career teams need direction, guidance and reassurance. Yet when they look at the top of their organizations, they see empty offices."

One former Trump transition official said the pace of nominations would likely pick up after Brouillette is confirmed.

For now, theories abound as to why the White House is moving so slowly to staff up the department. A former Republican DOE official who asked to remain anonymous suggested the Trump administration’s slow pace was purposeful in an effort to slow the agency’s work.

Other former agency officials guess the administration may have simply learned only recently the importance of carefully vetting candidates following the embarrassing fallout with Michael Flynn, Trump’s former national security adviser. Flynn was forced to resign in mid-February over revelations about his contacts with the Russian ambassador to the United States and misleading statements to Vice President Mike Pence.

Yet another former DOE official blamed Republican leadership, noting Perry — the former Texas governor — wasn’t confirmed until March, whereas former Energy secretaries under Obama and Bush were in place by the end of January.

What they all agreed on were the pitfalls of having acting leaders in DOE offices in a push for drastic changes.

"A low-level staffer without program lead responsibility can’t go in and reorganize a program," said a senior policy adviser who joined Bush’s DOE in February 2001. "If you want to change something, you have to have someone in place with the authority to do that.

"It’s a risk to come in and try to change a bunch of things without your change agents in place," the adviser said.

There are acting chiefs leading DOE’s Office of Science, Office of Energy Efficiency and Renewable Energy, and other programs — in some instances, voids being filled by political appointees with controversial views.

Dan Simmons, who’s leading the Office of Energy Efficiency and Renewable Energy (EERE), for example, has made remarks skeptical of renewable energy and climate change (E&E News PM, May 9).

DOE staffers who asked to remain anonymous said Simmons laid out the proposed cuts for EERE earlier this week and offered a free-market explanation of how the United States would compete with countries like China that are ramping up spending on clean energy technologies.

Simmons’ role shows the difficulty of an acting office head trying to explain the administration’s views to anxious staffers. One DOE career employee said many staffers have been asking whether they should retire early but noted DOE management has repeatedly emphasized layoffs and reorganization hinged on a budget proposal that has faced strong criticism on Capitol Hill.

Lake Barrett, a former DOE staffer who worked on nuclear and defense issues through five administrations, pointed to the Trump White House’s apparent desire to revive the Yucca Mountain, Nev., nuclear waste repository project. But the Office of Nuclear Energy lacks a Senate-confirmed leader, and Perry has yet to announce whether an office or point person would be re-established to oversee the contentious program if it returns.

"We know what the administration has said in the blueprint, in the budget: They said they want to continue with Yucca Mountain," Barrett said. "Now it comes time for the Yucca people. Somebody has to go and develop and implement a plan for fiscal year 2017 and 2018."

Yet another demand facing acting DOE heads is the need to outline and clarify priorities, Barrett said.

For example, he noted that Perry has vowed to defend science even as the administration is proposing $900 million in cuts at the Office of Science, which oversees 10 national labs.

"The secretary gives an overview of the president’s views, the deputy secretary takes the gospel of the secretary and then implements it," Barrett said. "So someone has to tell people what’s gospel versus what’s heresy. How do I separate worthy science from less worthy science?"

He added, "All of these decisions of billions of dollars of work need to be made, contractors need guidance."

The White House and DOE didn’t respond to requests for comment on this story.

On Capitol Hill, key senators have expressed concern about the president’s proposed budget cuts, major proposed shifts like draining the Strategic Petroleum Reserve and even a lack of quorum at the Federal Energy Regulatory Commission.

The big question: why it’s taken so long for paperwork needed for confirmations months after nominees are named.

"I don’t know what happens. They go into some dark hole, and eventually they come out," she told reporters. "This is going into Memorial Day, and we’ve only had now five people" nominated for energy posts — Perry, Jonas and Brouillette at DOE and two for FERC, Neil Chatterjee and Robert Powelson.

Murkowski said she’s received assurances from the White House of "moving right along" and "no problems" when she’s pressed for information.

Looking at the congressional calendar, some former DOE officials said the concern is that Congress will have a full plate and less time to consider nominees as the summer begins.

Navin said there’s an open Senate window at the beginning of an administration to "get lots of nominees in quickly — before Congress gets busy, before you’ve released controversial proposals, while you still have trust with both sides on the committee."

But he said that window has already closed.