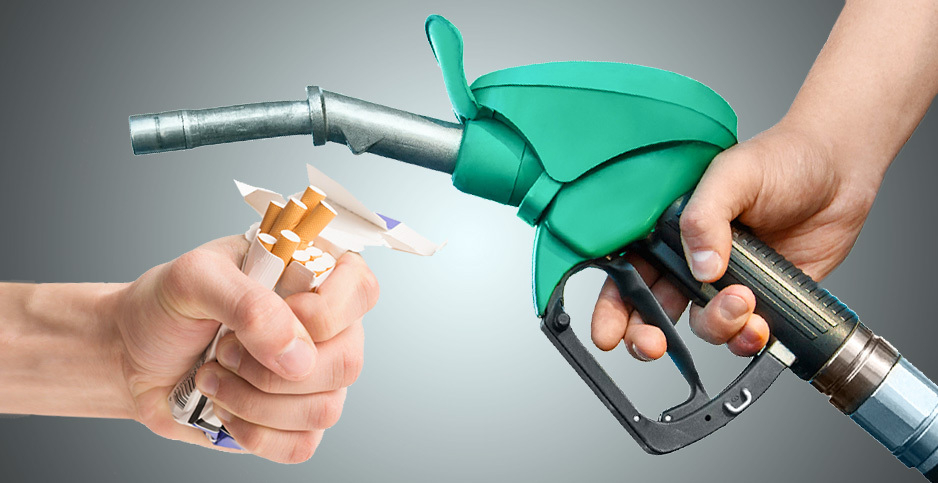 Cities and states look to past litigation against Big Tobacco as they push lawsuits against Big Oil. Claudine Hellmuth/E&E News (illustration); Freepik (photos)

In 2006, a federal judge issued a scathing ruling that would reverberate across the country.

"Over the course of more than 50 years, Defendants lied, misrepresented and deceived the American public," Judge Gladys Kessler of the U.S. District Court for the District of Columbia wrote in a nearly 1,700-page opinion.

"Defendants have marketed and sold their lethal product with zeal, with deception, with a single-minded focus on their financial success, and without regard for the human tragedy or social costs that success exacted," she wrote.

Kessler was referring to the largest U.S. tobacco companies and their trade associations, which she found had misled American consumers about the harmful health effects of smoking cigarettes and the addictive nature of nicotine.

But she might as well have been describing the world’s biggest oil and gas companies.

That’s according to states and municipalities that are now suing fossil fuel companies over their contribution to — and alleged deception about — the dangers of climate change.

"The tobacco companies were deliberately lying about the harmful effects of cigarettes, and they had to pay for those false statements," said Minnesota Attorney General Keith Ellison (D), who filed a climate liability lawsuit last year against Exxon Mobil Corp., the American Petroleum Institute and three Koch entities.

"With Exxon Mobil, Koch and API, we will show that they, too, were deliberately misleading and lying to the public about how their products caused climate change so they could keep making billions of dollars," Ellison said in a phone interview with E&E News.

Since 2017, five states and more than a dozen municipalities have filed lawsuits seeking to hold the fossil fuel industry financially responsible for floods, wildfires and other disasters fueled by rising global temperatures.

All five of those states — Connecticut, Delaware, Massachusetts, Minnesota and Rhode Island — specifically mentioned the tobacco industry in their complaints.

The fossil fuel industry and its allies, however, strongly object to the Big Tobacco comparison. They argue that unlike cigarette manufacturers, energy companies have provided a valuable benefit to all Americans — a service for which they say they shouldn’t be punished in court.

"Energy is a staple of modern life. I mean, this is something that we need to heat our homes, to fuel our cars, to turn on our lights, to power our factories," said Phil Goldberg, special counsel for the Manufacturers’ Accountability Project, an initiative of the National Association of Manufacturers that opposes the climate liability litigation.

In addition to serving as special counsel for the Manufacturers’ Accountability Project, Goldberg is a partner at Shook, Hardy & Bacon LLP, a law firm that represented tobacco clients in the litigation brought by state attorneys general in the 1990s. Goldberg, who joined the firm’s public policy practice in 2003, declined to comment on the tobacco litigation for that reason.

‘They knew and believed otherwise’

In the 1950s and ’60s, researchers at tobacco companies began to identify dozens of cancer-causing chemicals in cigarette smoke, including arsenic and benzene.

"Carcinogens are found in practically every class of compounds in smoke," Helmut Wakeham, research director at the tobacco manufacturer Philip Morris Inc., wrote in an internal industry memo in 1961.

But over the following decades, tobacco company executives vigorously denied this scientific connection in public-facing remarks and advertisements.

It was a similar story at oil supermajor Exxon Mobil Corp., where in-house scientist James Black told management in 1977: "There is general scientific agreement that the most likely manner in which mankind is influencing the global climate is through carbon dioxide release from the burning of fossil fuels."

Despite this warning, Exxon and its peers would spend decades and billions of dollars casting doubt on this scientific consensus, including in advertorials in major newspapers such as The New York Times.

All 50 states filed lawsuits against the biggest tobacco manufacturers in the 1990s, alleging the companies had deceived the public about the harms of smoking and should cover the Medicaid costs of treating people with smoking-related illnesses. The state suits culminated in a $206 billion master settlement agreement in 1998.

The following year, the Department of Justice launched a criminal complaint against the tobacco firms under the Racketeer Influenced and Corrupt Organizations Act. The federal complaint, which alleged the companies had fraudulently covered up the health risks of smoking for 50 years, resulted in the historic ruling from Judge Kessler.

So far, the litigation against Big Oil has been ensnared in procedural battles over whether it belongs in state or federal court, meaning it hasn’t yet progressed to trial or settlement. The Supreme Court will soon issue a decision in a case stemming from Baltimore’s climate liability lawsuit that could help determine the venue — and by extension, potentially, the fate — of the state and local challenges against fossil fuel firms (Climatewire, Feb. 23).

"Both the tobacco industry and the petroleum industry denied that there were harms associated with their products, while at the same time … their internal documents showed that they knew and believed otherwise," said Eubanks, now chief counsel at the National Whistleblower Center.

Another similarity between the oil and tobacco litigation is the involvement of trade associations in the legal battles, said Robert Proctor, a science historian at Stanford University and the author of the book "Golden Holocaust: Origins of the Cigarette Catastrophe and the Case for Abolition."

As one of its first acts, the committee published the now-infamous "A Frank Statement to Cigarette Smokers," which asserted: "We believe the products we make are not injurious to health."

Similarly, the American Petroleum Institute, a trade association for the oil and gas industry, led efforts to portray the link between burning fossil fuels and global warming as uncertain.

A 1998 internal strategy document written by a team convened by API stated that "victory will be achieved" when "a majority of the American public, including industry leadership, recognizes that significant uncertainties exist in climate science."

The Tobacco Industry Research Committee — later rebranded as the Council for Tobacco Research — was ultimately dissolved by the 1998 master settlement agreement with state attorneys general.

Under the terms of the agreement, the four largest tobacco manufacturers also agreed to amend their advertising practices and shell out $206 billion over 25 years to 46 states, five territories and the District of Columbia.

Recent climate lawsuits brought by Delaware; Minnesota; and Hoboken, N.J., all name API as a defendant in addition to oil and gas companies.

"One, [API] knew the effects of their products, and two, they deliberately coordinated and assisted in perpetuating falsehoods about the dangers of their products," said Ellison, the Minnesota attorney general. "So yeah, API has a lot of answering to do."

Trade associations like API are "really just engines of deception," said Proctor, who has served as an expert witness in tobacco litigation and advised climate activists on strategies for suing Big Oil at a 2012 conference in La Jolla, Calif.

"I think that’s going to have some of the strongest grip in the litigation because those are very parallel to the Tobacco Institute," Proctor added.

Some conservative interests bristle at the comparison between the legal challenges to Big Tobacco and Big Oil.

Marlo Lewis, a senior fellow at the Competitive Enterprise Institute, a right-leaning think tank, scoffed at the notion of equating cigarettes and fossil fuels in court.

"This whole idea that our civilization is addicted to fossil fuels and we must break this dangerous addiction is itself so completely fallacious," Lewis said.

"Fossil fuels, probably more than any other material force on the planet, have benefited the greatest number of people over the longest period of time," he added.

As a 501(c)(3) nonprofit organization, CEI does not disclose its donors. But records compiled by DeSmogBlog show the group has received significant funding from the fossil fuel industry, including at least $2.1 million from Exxon through 2006.

"Tobacco has satisfied the urges of its users, but it has never had a real benefit to society," she said. "Fossil fuels underlie tremendous advances in the economy and the standard of living."

Norton added that it’s unfair to pin the blame for climate change on a small number of corporate actors.

"When you looked at the tobacco litigation, the question of who was responsible was fairly easy to comprehend. It was either the tobacco manufacturers or the smokers," she said.

‘A sad and disquieting chapter’

Regardless of whether the two types of litigation raise the same issues, they feature some of the same lawyers and law firms.

For example, Kansas City, Mo.-based Shook, Hardy & Bacon represented five of the six largest cigarette manufacturers in the tobacco litigation. Today, Goldberg, managing partner at the firm, serves as special counsel for the Manufacturers’ Accountability Project, one of the most vocal opponents of the climate litigation against oil companies.

The New York Supreme Court in 2019 ruled in favor of Exxon in the case, which differs from the other climate lawsuits against Big Oil because it focuses on investors rather than consumers (Greenwire, Dec. 10, 2019).

In her landmark 2006 decision, Judge Kessler had particularly harsh words for the lawyers who helped the tobacco industry mislead American consumers for decades.

"Finally, a word must be said about the role of lawyers in this fifty-year history of deceiving smokers, potential smokers, and the American public about the hazards of smoking and second hand smoke, and the addictiveness of nicotine," wrote the judge, who was appointed during the Clinton administration.

"At every stage, lawyers played an absolutely central role in the creation and perpetuation of the Enterprise and the implementation of its fraudulent schemes," she wrote, adding, "What a sad and disquieting chapter in the history of an honorable and often courageous profession."

One lesson is to be persistent, said Martin Olszynski, an associate professor of law at the University of Calgary in Canada and the lead author of the 2017 paper "From Smokes to Smokestacks: Lessons From Tobacco for the Future of Climate Change Liability."

Olszynski noted that the early lawsuits against tobacco companies from the 1950s to the ’80s largely failed. It wasn’t until the ’90s that challengers began to notch some victories, in part because internal documents leaked showing the industry knew of the addictive nature of nicotine.

Another related lesson is the importance of uncovering internal documents that show what the fossil fuel industry knew and when, lawyers said.

The master settlement agreement in the tobacco litigation resulted in the disclosure of millions of internal industry documents, which are now publicly available in an online archive maintained by the University of California, San Francisco.

So far, the lawsuits against Big Oil over climate change have been tied up in procedural wrangling over whether they belong in state or federal court. But once these jurisdictional battles are resolved, the challengers could enter the discovery phase and uncover more information about oil companies’ early knowledge of climate change, building on the work of investigative journalists.

"One of the things that’s going to matter a lot is getting access to documents," said Proctor of Stanford.