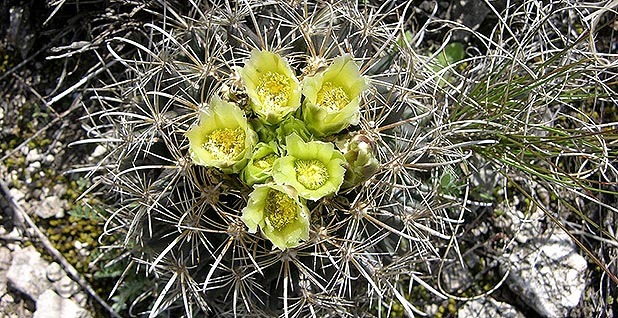 The Tobusch fishhook cactus is a partial success story for the Endangered Species Act. Jackie Poole/Texas Parks and Wildlife Dept.

The Tobusch fishhook cactus has a fancy new name and an encouraging new status, as a partial success story for the Endangered Species Act.

Punctuating extensive studies and recovery efforts that still have a ways to go, the Fish and Wildlife Service today reclassified the cactus from endangered to threatened status. The move shows progress since the initial 1979 listing, while acknowledging continued vulnerability.

"Tobusch fishhook cactus is currently no longer in danger of extinction, because it has larger, more numerous populations that are much more widely distributed than we previously understood," FWS stated, adding that "nevertheless, it is likely to become endangered within the foreseeable future because … threats have not been fully ameliorated."

The persistent threats to the small, globular cactus that lives in Texas include "changes in vegetation and wildfire frequency, insect parasites and feral hog rooting," according to the Fish and Wildlife Service.

The long-anticipated status shift will be formally published tomorrow in the Federal Register and takes effect 30 days after that.

More of the same will be happening in the coming months, as FWS processes a number of ESA transitions.

At least 10 other endangered species are slated to be reclassified as threatened, according to the service’s spring 2018 regulatory agenda published last week. These range from the obscure, like the Kuenzler hedgehog cactus, to the relatively notorious American burying beetle (Greenwire, Sept. 1, 2017).

The upcoming FWS regulatory agenda also includes the potential outright removal of more than a dozen species from the ESA list, from the Kirtland’s warbler to the Foskett speckled dace (Greenwire, Jan. 3).

For hardcore cactus fans, the reclassification of the Tobusch fishhook cactus is coming with a revised scientific name. Formerly known as Ancistrocactus tobuschii, the cactus will henceforth be known by experts as Sclerocactus brevihamatus ssp. tobuschii.

"We listed it as a species," the service noted, "however, recent phylogenetic evidence supports classifying Tobusch fishhook cactus as [a] subspecies."

The reclassification of the cactus also unites, after a fashion, advocates who usually find themselves on opposite sides of an ESA fight.

The initial petition to downlist the species was filed in 2012 by the conservative Pacific Legal Foundation along with groups including the New Mexico Cattle Growers’ Association and the Texas Farm Bureau. The Obama administration subsequently proposed the reclassification in December 2016, prompting applause from environmentalists.

"The road to recovery for endangered species is often a long one, but thanks to the Endangered Species Act, species like the Tobusch fishhook cactus are recovering," Michael Robinson of the Center for Biological Diversity said in a statement at the time.

The cactus inhabits the Edwards Plateau of central Texas, where it is armed with curved spines and it grows slowly to only about 2 inches in diameter and in height.

When listed as endangered in 1979, fewer than 200 individuals of Tobusch fishhook cactus were known from four riparian sites, the FWS noted. Now, an estimated 4,500 individuals live in eight Texas counties, officials say, though mysteries remain.

"It is likely that projected climate changes will affect Tobusch fishhook cactus, but we do not currently know whether such changes will have a net positive or negative effect on its viability," the agency stated.