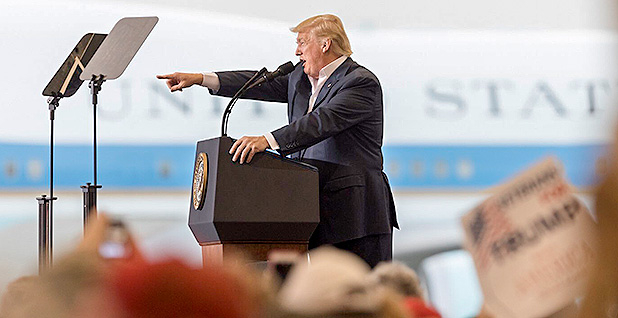 For those on the left, there isn’t much to like about President Trump’s plans to slash domestic spending while beefing up cash for military efforts. Environmentalists, Democrats and liberal watchdog groups were quick to condemn the steep spending cuts proposed for EPA and environmental programs across other federal agencies.

"Literally and figuratively, this is a scorched-earth budget that represents an all-out assault on clean air, water, and land," former EPA Administrator Gina McCarthy said today.

Meanwhile, conservatives and foes of the Obama administration’s energy policies are reveling in the proposal for fiscal 2018, which represents an about-face from the agenda pursued over the past eight years.

The Obama era "is over, and President Trump is already delivering on his campaign promises to cut red tape, especially when it comes to expensive and ineffective environmental regulations," Sen. Jim Inhofe (R-Okla.) wrote today in a USA Today op-ed.

The budget will likely be drastically different once Congress is through with it. Still, it offers a glimpse into the new administration’s top energy and environmental priorities, which include broad themes like reining in major environmental rules and spending on clean energy technologies and boosting energy production on public lands.

Here’s a look at some of the major losers and winners under Trump’s plan:

EPA: The agency would take the biggest percentage hit of all Cabinet departments and major agencies under Trump’s plan. EPA would see a 31 percent reduction in its current budget and would lose about 3,200 employees. Programs slated for cuts include climate change regulations, the Superfund program, enforcement efforts, the science office and environmental grants.

Federal environmental employees: Staffers at EPA and employees in other government programs slated for cuts may want to polish their resumes. While Congress may intervene to save some of the programs on the White House chopping block, buyouts or layoffs could be coming soon in some of the areas targeted by Trump and his team.

President Obama: Trump’s budget is a clear repudiation of Obama’s environmental legacy. It eliminates all funding for Obama’s signature climate change rule — the Clean Power Plan — and cuts cash for other climate and energy programs the former president and his allies supported. On defense, the budget outline criticized Obama by name. "The military’s depletion under President Obama is our foremost challenge," the White House said of its plans to boost defense spending.

Greens: Environmentalists slammed the cuts to EPA, the Interior Department and federal climate change efforts and urged Congress to put up a fight. "If Trump refuses to be serious about protecting our health and climate, or our publicly owned lands, then Congress must act, do its job, and reject this rigged budget," Sierra Club Executive Director Michael Brune said in a statement.

Climate change programs: Trump’s budget would ax climate spending across the government. In addition to eliminating funding for the Clean Power Plan implementation, EPA’s international climate change and climate change research programs would be discontinued. The State Department’s Global Climate Change Initiative would be eliminated, and funding for the Green Climate Fund would be halted.

Proponents of land acquisition: Scooping up new federal property isn’t a priority for the Trump administration. The Interior outline cuts funding for land acquisition, saying the department will focus instead on existing parks, refuges and other properties. Funding would also be reduced for major land acquisition by the National Forest System.

EPA science office: The White House aims to cut EPA’s Office of Research and Development by about half — from about $483 million annually to about $250 million. The science office would prioritize activities related to "core environmental statutory requirements," as opposed to "extramural activities," the outline says.

Clean energy research: Clean energy, smart grid and electric vehicle initiatives favored by the Obama administration are singled out for elimination or sharp cutbacks, based on the president’s conviction that research aimed at jump-starting new technology should be left to the private sector (Energywire, March 16).

EPA’s critics: Those who have long criticized EPA as an out-of-control federal bureaucracy have much to like about the proposed downsizing to the agency. While Trump isn’t proposing abolishing the agency, as he did on the campaign trail, his planned cuts for EPA follow through on his promises to make major overhauls there.

Conservative think tanks: Groups like the Heritage Foundation, Republican Study Committee and Competitive Enterprise Institute had previously pitched many of the cuts outlined by the Trump administration in their budget proposals. Current and former members of those groups have worked on Trump’s transition team and inside the administration and played a role in shaping the White House budget request (Greenwire, Jan. 27).

National Nuclear Security Administration: The nuclear weapons programs that form nearly half the department’s budget would get an 11 percent increase. The administration says the boost would support goals of "moving toward a responsible nuclear infrastructure" and enable the NNSA to "begin to address its critical infrastructure maintenance backlog."

Congressional Republicans: Members of the GOP who have long criticized Obama-era environmental policies as overreaching could declare victory back home if those efforts are reined in. They could also score political points with their constituents if they fight to restore funding to some of the local programs targeted by Trump that may not necessarily be high priorities for cuts by the administration.

Would-be energy developers: Trump’s proposal signals that energy developers will be welcome on public lands and offshore waters. The administration wants Interior to "provide industry with access to the energy resources America needs, while ensuring taxpayers receive a fair return from the development of these public resources."

Small-government proponents: Conservative power broker Grover Norquist, who heads the group Americans for Tax Reform, once famously said, "I don’t want to abolish government. I simply want to reduce it to the size where I can drag it into the bathroom and drown it in the bathtub." Except for defense spending, he and other foes of government spending are likely to be pleased by Trump’s request.