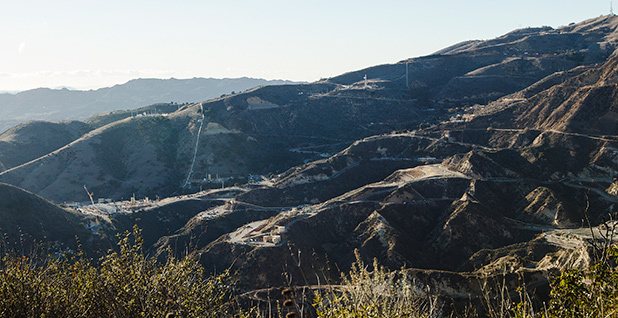 The well blowout in Aliso Canyon near Los Angeles was the largest methane leak in U.S. history and could cost the world more than $100 million in climate damage, experts said.

The well emitted 97,100 tons of methane over four months into the dry foothills just north of Los Angeles’ Porter Ranch neighborhood. That would fill a balloon reaching more than a third of a mile into the sky, said Jeff Peischl, an atmospheric scientist at the National Oceanic and Atmospheric Administration’s Earth System Research Laboratory (ESRL) and co-author of the study. The results were published yesterday in Science.

The SS-25 well at the sprawling underground natural gas storage facility owned by Southern California Gas Co. began leaking on Oct. 23, 2015. A heady mix of methane, ethane, benzene and sulfur-containing odorants sickened thousands of residents in nearby Porter Ranch. The well was plugged on Feb. 12.

The methane has since dissipated locally but will remain in the atmosphere for one to two decades and exacerbate climate change. The leak is a global climate problem, since methane is 86 times as potent as carbon dioxide on a 20-year time scale, said Stephen Conley, a researcher at the University of California, Davis, and lead author of the study.

"Beyond the initial health effects of the people in Porter Ranch, this is not just a L.A. or California problem," Conley said. "Methane is carried by the wind, mixes in and increases the global burden."

At its peak, some 60 tons of methane escaped per hour, effectively doubling L.A.’s emissions rate from all sources, including landfills, agriculture, and oil and gas. Aliso Canyon also dwarfed emissions from other major U.S. point sources, such as the San Juan oil field, which spans parts of New Mexico, Colorado, Arizona and Utah, and whose methane plumes are visible from space (ClimateWire, Oct. 10, 2014).

"The amount of leak was on the order of what is coming from entire regions where oil and natural gas extraction occurs," said Peischl.

SoCalGas said that although the leak was large, some perspective is important. The leak was 12 percent of the annual emissions of California’s dairy industry, the company said.

"Our calculation of how much methane was emitted will be a more accurate measurement. Because this will take several more weeks, we are not in a position to comment on, or otherwise confirm, the accuracy of any other researcher," the company stated in a press release.

How costly was the leak?

Despite its size, Aliso Canyon did not capture the nation’s attention the way BP PLC’s 2010 Deepwater Horizon spill in the Gulf of Mexico did. The live stream of oil leaking into the ocean’s depths was a potent visual, Conley said. Methane, on the other hand, is invisible.

The Aliso leak amounts to just 0.002 percent of the world’s total methane budget, which means the added climate impact of the release is small, Conley said.

In dollar terms, the resulting amount of warming from the blowout could cost an estimated $107 million in global damage, assuming that 1 ton of methane in 2015 costs $1,100 in damage at a 3 percent discount rate, according to ClimateWire‘s analysis. That number was calculated using the social cost of methane used by U.S. EPA.

That would "fairly represent the climate change costs of the leak," said Joseph Aldy, a professor of public policy at Harvard University and a former climate aide to President Obama. "It would not capture other non-climate costs, such as local public health impacts."

Others disagree with the idea that a price tag can be attached to the leak. Paul Knappenberger, assistant director at the Center for the Study of Science at the Cato Institute, a libertarian think tank, said the release amounts to a 0.0000014 degree Celsius of additional warming. Regarding the social cost of methane, he said there’s a "very high degree of uncertainty" about its accuracy.

A ‘perfect storm of nausea’

Conley, a pilot and scientist, was initially recruited by the Environmental Defense Fund to monitor the leak. He owns a Mooney aircraft that contains methane-tracking gear, and he flew downwind of the leak, above Porter Ranch.

Almost immediately, it became clear that this leak was unlike any other. Emissions the first day were 48 tons per hour, so high that Conley rechecked his instruments.

"It became obvious that there wasn’t anything wrong with the instruments," he said in a statement. "This was just a huge event."

Conley and his colleagues flew out 14 times, between 11 a.m. and 3:30 p.m. Meanwhile, Peischl and other researchers drove along Porter Ranch, capturing air samples on the ground. Everybody got sick from turbulence and the smell, he said.

It was the "perfect storm of nausea," Conley said.

The scientists say the leak will be perceptible in California’s efforts to meet its emissions targets. Tom Ryerson, an atmospheric scientist with NOAA and a co-author of the study, said in a statement that big leaks "significantly impact greenhouse gas control efforts."

Discussions to address the uptick in gas concentration is already underway. SoCalGas has pledged to fund efforts that might offset the sudden belch of methane, according to state officials.

"SoCalGas has committed to Gov. Brown that they will pay for full mitigation," said Dave Clegern, spokesman for ARB. "We are in the process of developing a plan to accomplish that."

While California is readying regulations that would require natural gas facilities to cap large methane leaks, there is currently no state rule that accounts for the effects that those blowouts have on the climate.

ARB released draft regulations earlier this month that would require operators to undertake emissions reductions to compensate for any large methane leak. They could include specific projects or other tactics (ClimateWire, Feb. 5). But the leak isn’t accounted for in the state’s cap-and-trade market, which is the policy that acts as a backstop enforcement mechanism keeping the state on track to achieve 1990 emissions levels by 2020.

"[SoCalGas] will be able to meet its emissions cap despite causing a release equal to almost 13 percent of the oil and gas sector’s annual methane emissions, and records of the cap-and-trade system will not give any indication that this leak occurred," wrote Sarah Duffy, a fellow at UCLA Law School’s Emmett Institute on Climate Change and the Environment, in a blog post. "That is worrisome."

Environmental activists are hoping the magnitude of the leak will nudge California policymakers to try to reduce the state’s reliance on natural gas and to examine its role as an exporter of natural gas and oil.

"I’m hoping what this disaster will highlight is that natural gas is not this panacea that everyone wants it to be," said Dan Jacobson, legislative director for Environment California.

Jacobson said the blowout will negate past emissions reductions, even if it’s not counted in California’s official accounting of greenhouse gases.

"This will basically take away all the work we’ve done in 2013 and 2014 to decrease our global warming pollution," he said.

He said mitigation could come in the form of reducing other greenhouse gases, particularly ones that double as conventional air pollutants, like black carbon.

"If there is a silver lining to this, the mitigation that SoCalGas has to pay could end up creating programs that could benefit a lot of people in the state of California," Jacobson said. "Let’s do it in the places that have been overburdened with pollution these last 40 to 50 years."