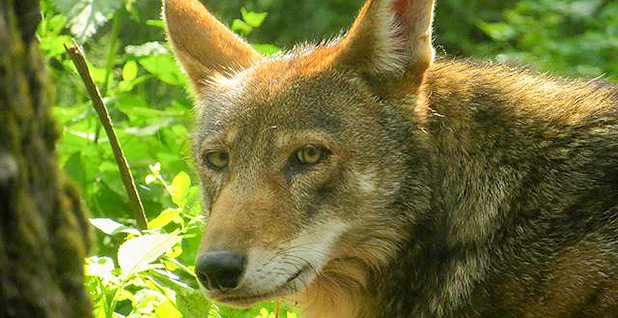 The red wolf in North Carolina would lose its long-held Endangered Species Act protections, under a new bill that opens another front in an ongoing dispute.

Authored by Rep. David Rouzer (R-N.C.), the legislation would strip the red wolf of the endangered designation it gained in 1973. Even if it doesn’t become law, the measure marks the latest Capitol Hill bid to shape the wolf’s identity and regulatory status.

Rouzer’s H.R. 6119 takes a more aggressive approach than the House Appropriations Committee, which as part of its fiscal 2019 Interior and environment funding bill would give the Fish and Wildlife Service one year to "review and determine" whether the red wolf "is a genetically valid species designation."

"There is a lack of consensus among the scientific community regarding the taxonomy and genetic ancestry of the red wolf," the Fish and Wildlife Service acknowledged last April. It noted that "several studies" provide support for deeming the red wolf a subspecies of the gray wolf, while "others have supported designation of the red wolf as a separate species."

The Senate Appropriations Committee offers yet another angle, stating in its version of the fiscal 2019 Interior funding bill that it "acknowledges issues raised by the North Carolina Wildlife Resources Commission regarding the Red Wolf Recovery Program" (E&E News PM, June 14).

The Senate panel further urges FWS to "work closely with the Commission to avoid negative impacts to landowners and other native species."

The political howling over the animal has been going on for years.

"These wolves are predatory animals, and they have become an exceedingly dangerous presence in eastern North Carolina," the late Republican Sen. Jesse Helms said in a 1995 debate. "They slink onto private property, they attack and feed upon farm animals and livestock, and we have reports that at least one child has been bitten by a red wolf and had to undergo tetanus treatment."

Once found from Texas to the East Coast, the red wolf is now confined to a region in northeastern North Carolina, along with a captive breeding population numbering about 200. Twenty-four wolves in the wild have worn tracking collars.

The wolves in the wild are considered a "nonessential experimental population," and Fish and Wildlife Service officials had hoped the animals could become established on their own without help from the captive breeding population. That hasn’t gone well.

In a species status report issued last April, FWS added that "without private landowner support we will not be able to recover the red wolf" and that "there is consensus that the current direction and management of the [recovery] is unacceptable to the Service and stakeholders."

Unlike Rouzer, though, the Fish and Wildlife Service concluded that the species should remain listed as endangered.

Rouzer’s office did not respond to emails seeking comment.