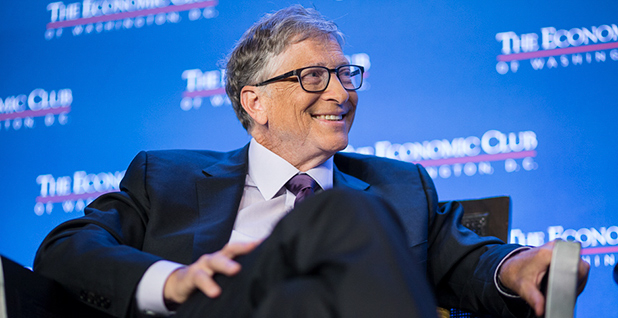 A coalition of renewable and grid advocates is launching a campaign today to support a nationwide build-out of transmission lines to help decarbonize the largest centers of electricity demand.

Known as the Macro Grid Initiative, the campaign will aim to convince state and federal policymakers — including legislators, the Federal Energy Regulatory Commission and regional grid planners — of the need to boost transmission links among Northeastern cities and the Southern and heartland regions that are most productive for solar and wind power. Microsoft Corp. co-founder Bill Gates is backing the initiative.

New transmission would make it easier for states to achieve their climate goals, bring down the cost of electricity and protect the grid’s resiliency, according to the coalition, which is led by the American Council on Renewable Energy (ACORE) and Americans for a Clean Energy Grid (ACEG).

Priorities will include getting FERC and regional transmission operators to create rules that would result in a "fully planned and integrated nationwide transmission system," the groups said.

Breakthrough Energy, a group of wealthy clean energy investors organized by Gates in 2016 to find low-carbon energy technologies, was a "critical funder," added Wetstone, who declined to specify the monetary amount. "They provided substantial support over a multiyear period to make it real."

Breakthrough Energy did not respond to requests for comment.

One 2016 study cited by the campaign and led by NOAA’s Earth System Research Laboratory in Colorado found that a network of high-voltage direct-current lines would be a "key enabling technology" for an 80% emissions reduction by 2030 — at a lower cost than energy storage.

But at present, said Wetstone, the nation’s transmission system is "outdated and Balkanized."

Eighty-eight percent of the country’s technical potential for wind production and 56% of solar potential lies in 15 central states, which can only buy about 30% of the nation’s power in 2050, said ACORE, citing projections from industry and federal analysts.

Building more power lines across the "seams" of regional power markets like the Midwest’s Midcontinent Independent System Operator, the Southwest Power Pool Inc. and the Mid-Atlantic’s PJM Interconnection LLC, the campaign’s backers say, would improve the grid’s reliability as it grows more deeply dependent on intermittent renewables and would save consumers tens of billions of dollars.

"You have big population centers in the east. We should really make an effort to better connect them with the middle part of the country that is very rich in renewable resources," said Wetstone.

The announcement arrives weeks after President Trump issued an executive order directing federal authorities to expedite permitting for energy projects. That action was aimed at pushing through highways, pipelines, and other energy and transportation projects on federal lands, according to an administration official cited by E&E News earlier this month (Greenwire, June 4).

Asked if ACORE believed the order would help transmission projects as well, Wetstone said it was an opportunity his group was "willing to look at."

"There’s a lot of talk about investing in infrastructure, and eventually we may see some of that. This needs to be part of the calculus," he said.