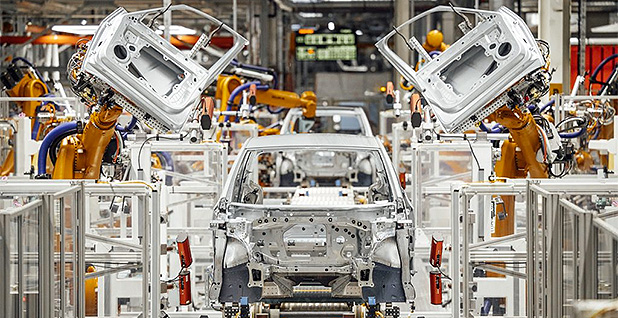 A California-based startup has raised researchers' hopes for a better battery for electric cars, but it's not yet clear whether it will be able to scale them for production in Volkswagen's vehicles. A Volkswagen factory is pictured. Volkswagen

An electric vehicle battery startup backed by Bill Gates and Volkswagen is claiming a major breakthrough on a technology that it says could power the next generation of clean cars and make them as widely attractive to drivers as gas vehicles — though some experts caution that bringing its innovation to market could be an even greater challenge.

The startup, San Jose, Calif.-based QuantumScape, has spent the last decade developing its version of a "solid state" battery, an alternative to lithium-ion batteries that researchers have long seen as promising.

Yesterday, the company unveiled data on how its battery’s cells had performed during demonstrations, impressing several of the field’s top independent researchers and spiking the value of the publicly traded company’s stock.

QuantumScape suggested that the company’s cells could serve as the building block for batteries capable of recharging 80% in just 15 minutes — considerably faster than most current technologies — while lasting longer under sustained use and under cold temperatures, and making it possible to travel several hundred miles on a single charge.

"I have not seen data this good anywhere else," said Stanley Whittingham, who won the Nobel Prize in Chemistry last year for his work on lithium-ion batteries, during a panel hosted by QuantumScape. "I think it’s a real breakthrough. We just have to make the cells bigger and get them into cars."

"It’s common for organizations to report hitting the ball, but not describing carefully what it was — was it a single or a double?" he said.

By contrast, QuantumScape’s results were clearly the real thing, Albertus added. "They’ve made a major step in their performance data, and I commend them for what they’ve done," he said.

Still, the startup still has lots of work ahead of it, and much to prove, before its invention can begin propelling cars on American highways.

The battery cells tested by QuantumScape are just one layer of a much larger cell structure — like a single playing card that has to be stacked into a full deck, as CEO Jagdeep Singh described it. Those "decks" are then bundled together into a battery.

Whether the company’s initial breakthrough will translate into the ability to scale up and churn out entire battery packs, at industrial scale, remains far from clear.

"Lots of chemistry questions … still seem to be a closely guarded secret," said Matt Lacey, an electric vehicle battery engineer at Swedish vehicle manufacturer Scania, in a Twitter post after QuantumScape’s livestreamed presentation of its data. "So questions are for sure still going to be asked until proper multilayer cells are demonstrated."

"[T]hey look to be onto something very promising. But experience tells us it’s easy to underestimate how hard it is to go from where they are now" to full-scale production, Lacey added.

"I really hope the hype can be kept in check and the expectations don’t become unrealistic," he said.

Searching for the ‘holy grail’

Keeping the hype in check might itself be unlikely.

Spun out of Stanford University in 2010, QuantumScape launched with a $1.5 million grant from ARPA-E, which tasked it with inventing a battery that would let EVs beat gas cars on price and performance.

In September, the company went public with a $3.3 billion valuation after merging with a shell company, despite scant public detail about its technology. It has raised about $1.5 billion in capital to date, according to executives. One investor is Microsoft founder Gates, who has cited it among companies that "will hopefully make EVs a realistic option for every car owner."

Volkswagen, a legacy automaker that has embraced electrification following a diesel emissions-cheating scandal, has taken a $300 million stake and launched a joint venture with QuantumScape, with the aim of using the latter’s batteries in VW electric cars by 2024-25.

One VW board member suggested during yesterday’s livestream that its lithium-ion factories could eventually be converted to production of QuantumScape’s solid-state batteries.

Researchers at ARPA-E and other federal agencies have long thought that solid-state technologies could be "the holy grail" that unlocks new battery capabilities, as Whittingham put it yesterday.

One of their key problems, however, has been their tendency to form dendrites — a kind of lithium buildup that can end up connecting one end of the battery to the other and cause it to short-circuit.

QuantumScape’s version includes a ceramic material that can block the dendrites from forming, while allowing for powerful currents of energy to flow into the battery, according to the company.

That would explain its 15-minute recharge time, which compares favorably with the speed advertised by Tesla for its latest Superchargers. Tesla says those can deliver 180 miles’ worth of charge in 15 minutes.

To test its battery’s performance, QuantumScape’s researchers simulated how the single-layer battery cells would respond if they were scaled and put into a car, then driven aggressively around a racetrack.

They found that this type of driving would degrade the company’s battery far less than lithium-ion varieties, put under similarly stressful conditions, they said.

Their technical progress on a battery so far provides a "critical building block," said Singh. "Now that we have the material demonstrated, we can focus on production."

The ceramic material used in the company’s battery, he asserted, was already produced at scale for both the battery and ceramics industries.

In its pilot stage of production with Volkswagen, QuantumScape aims to produce 1 gigawatt-hour of its batteries, then make the leap to 20 GWh by 2024 or 2025.