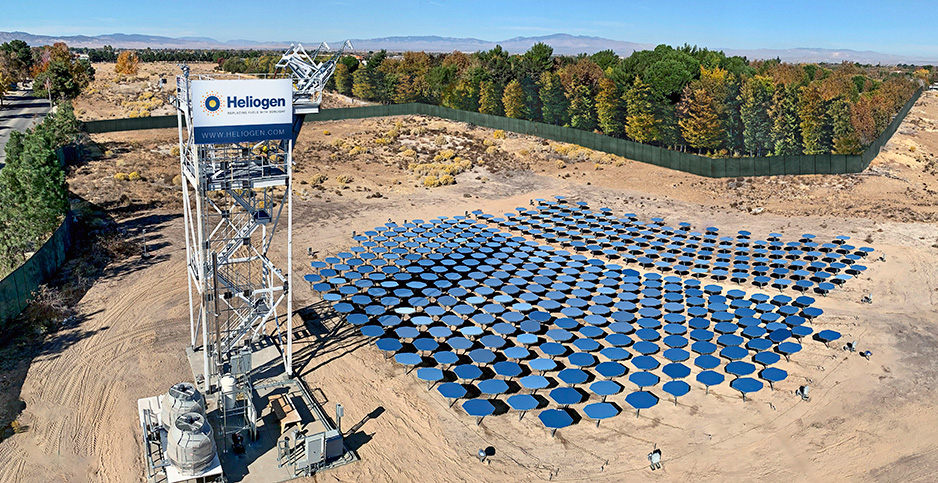 A self-described clean energy company is taking aim at greenhouse gas emissions from the industrial sector with a technology it says can commercially replace fossil fuels by harnessing extreme heat from the sun.

Heliogen, which has the backing of Microsoft Corp. co-founder Bill Gates and other billionaires, said its technology is a "key technical breakthrough" for concentrated solar thermal and a major step toward addressing climate change. Gates released a statement calling Heliogen a "promising development."

"The potential impact of Heliogen’s patented technology is massive. With temperatures from its concentrating solar thermal technology exceeding 1,000 degrees Celsius, Heliogen will be able to replace the fuel that generates greenhouse gas emissions from industrial processes with solar energy for the first time," the company said in a statement.

Heliogen said it "uniquely uses" advanced computer vision software to "hyper-accurately" aim individual heliostats, or the mirrors that surround a tower, to reflect sunlight to a single target.

While previous incarnations of solar thermal technology have sought to generate steam and electricity from the resulting heat, Heliogen seeks to use that heat to "transform sunlight into fuels at scale," thus opening the door to curb industrial sector emissions. Securing high heat without burning fossil fuels remains a top challenge for sectors such as cement and steel — two of the world’s highest-emitting industries.

"We’ve made great strides in deploying clean energy in our electricity system. But electricity accounts for less than a quarter of global energy demand," Gross said in a statement. "Heliogen represents a technological leap forward in addressing the other 75 percent of energy demand: the use of fossil fuels for industrial processes and transportation."

The company said its technology road map envisions heating temperatures up to 1,500 C to allow CO2-splitting and water-splitting to make fuels like hydrogen.

Whether the company can achieve its goals and the technology can be cost-effective is an open question.

Questions remain about siting considerations, including how the company decides where one of its facilities is built, and things like how much land it needs and how much sun that location will require, he said. At such an early stage, Rissman said more information is important, and he pointed to other mechanisms to decarbonizing the cement and steel industries.

"I think sometimes there’s too much of a focus on brand-new, unproven technologies and not enough of a focus on these techniques that are lower tech but have huge potential," Rissman said, pointing to techniques that reduce the amount of concrete needed for a building like pre-tensioning the concrete with steel cables or using curved fabric molds.

Yet Mark Mehos, a program manager for concentrating solar polar (CSP) at the National Renewable Energy Laboratory, said the industrial sector is a significant market for this kind of application of concentrating optics.

"If they can achieve those temperatures reliably and cost-effectively, then they’re really reaching beyond the current market for CSP," Mehos said. He compared the technology to a magnifying glass and said greater precision on a single spot leads to higher temperatures.

Heliogen built its commercial facility in Lancaster, Calif., roughly 70 miles north of Los Angeles. Gross said the company is making that facility open to initial commercial customers and offering customers the option of constructing and operating new plants directly at the site where industrial process heat is needed.

Rebecca Walsh Dell, an industry strategist at the ClimateWorks Foundation, said that although the temperatures Heliogen cites in its press release are higher than anything commercially used for concentrating solar, 1,000 C isn’t high enough yet to get at the central processes in the cement and steel industries.

Walsh Dell pointed to one component of a cement kiln that needs to reach roughly 1,500 C and the same approximate temperature needed to melt steel. A thousand degrees Celsius is high enough, though, for other chemical reactions that happen in a steel plant, she said.

"There is a lot of hard work and process engineering and figuring out how you might integrate their technology into a steel plant or a cement kiln — into an actual industrial production process — because the way that they are producing their heat is very different from current ways," Walsh Dell said.