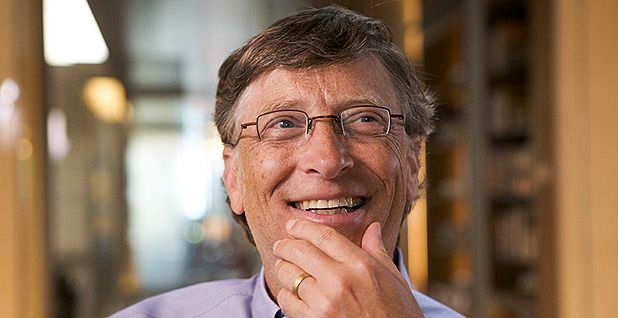 Until now, it was not known whether the Breakthrough Energy Ventures (BEV) fund, which Gates, Amazon,com Inc. CEO Jeff Bezos and others formed in 2016 to support zero-emissions technologies, would initially fund innovations in the power sector, transportation or some other area. Last December, Gates said the fund was focusing on five initial areas, including grid-scale storage, but did not announce specific startups.

Quidnet overhauls the idea of pumped hydro by pumping water underground in shale rock to create pressure, later harnessing the water to run turbines. Form Energy is developing new types of battery chemistries that it says can store renewable energy for longer periods of time at low cost.

"We’ll have more to share soon about BEV’s broader portfolio, but the team has been active evaluating and making investments," a BEV official said. Quartz first reported the investments.

Analysts are watching the Gates-led fund closely because of the dollar amounts involved.

Gates said in a 2016 interview the investments could be at least $1 billion spread out over four to five years (Greenwire, Dec. 13, 2016). Several Obama administration officials, including former Department of Energy Assistant Secretary David Danielson, are working with the fund.

"Many energy technologies are capital-intensive and take a long time to prove and scale. That means that venture capital isn’t a good fit — more patient capital is necessary, and that’s what Breakthrough Ventures is supposed to provide," said David Hart, a senior fellow at the Information Technology and Innovation Foundation, a think tank.

Hart recently co-authored a paper with MIT warning that the energy storage industry may be settling prematurely on lithium-ion batteries, which are not the best option for backing up the grid.

Quidnet and Form Energy didn’t respond to a request for comment. Quartz reported that Quidnet raised $6.4 million through BEV and Evok Innovations to develop field tests, and Form Energy received $9 million from BEV.

On its website, Quidnet claims it can offer storage at a lower installed cost than natural gas peaker plants by avoiding some of the pitfalls associated with pumped hydro, including the need for surface reservoirs and specific geography.

Instead of storing water at the surface, the technology envisions shooting water into underground shale, compressing the rock. When electricity is needed, the pressure is eased, and the water is used for power.

Form Energy hasn’t released details of its technology, although its founders have worked on sulfur-based batteries in the past.

Separately, another venture capital firm focused on clean-energy, G2VP, announced today it has total capital commitments of $350 million. The company, founded last year, is an offshoot of the Kleiner Perkins Green Growth Fund and is backed by venture capitalist John Doerr.

It said it would target digitizing traditional industry in sectors like energy, transportation and agriculture. "The world is still in desperate need for solutions to sustainability," said Brook Porter, GVCP co-founder.

Like most venture capital moves, it’s unclear whether the money will spur breakthroughs. The earlier Kleiner Perkins fund supported multiple companies that failed to live up to their promise.

Some of Gates’ clean-energy investments also have run into trouble in the past. He was an investor, for example, in Aquion Energy a saltwater-based battery company that announced plans last year to move to China after filing for bankruptcy.