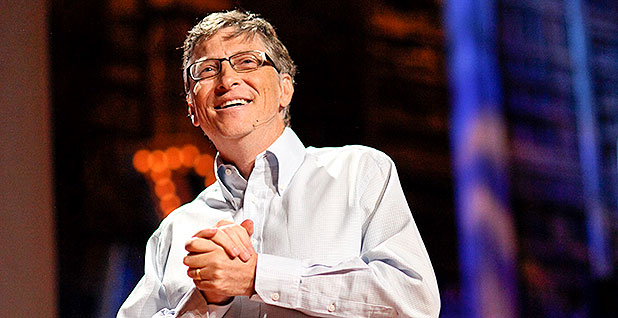 Until now, it was unknown whether the BEV fund might target nuclear power, fusion, renewables or other technologies. The fund has not yet made investments, according to sources.

Last year, Gates spearheaded BEV with Amazon.com Inc. CEO Jeff Bezos, Virgin Group Ltd. founder Richard Branson and other billionaires to bring promising technologies to market and help lower global greenhouse gas emissions to "near zero" (Greenwire, Dec. 12, 2016). The more than $1 billion fund was a follow-up to the Breakthrough Energy Coalition, a group launched by Gates in 2015 at global climate talks in Paris to work in conjunction with Mission Innovation, a global commitment by countries to double clean energy spending within five years.

"The world can’t afford to wait the decades that it usually takes to develop promising technology, find investors, connect with governments willing to roll it out and reach customers. Our goal is to bring ideas out of the lab and into the market much faster," Gates said on his blog today.

Gates said the liquid fuels investments would focus on products that can harness sunlight to power airplanes, trucks and other polluters.

The decision to pick the five areas stemmed from an earlier "landscape of innovation" document from the fund. A Gates aide said the five investment targets could change over time, if the fund’s strategy changes.

The coalition participants aren’t necessarily investing in the fund but "share a commitment to accelerating the commercialization of new energy technologies," according to a statement. Additionally, the coalition plans to pilot public-private collaborations with Canada, the European Commission, France, Mexico and the United Kingdom, all part of the original Mission Innovation commitment.

BEV said that "these efforts involve rigorous in-country research and expert advisory services that allow Breakthrough Energy to help these governments review how innovations are developed in each country, help make policy and regulatory recommendations to attract early and mid-stage capital."

The announcement comes as the fate of ARPA-E, DOE’s chief innovation arm, remains in question. President Trump called for its elimination, and an appropriations bill that moved through the House this year would do just that. Appropriations language on the table also would slash DOE funding for energy research at applied offices. Gates has been outspoken in supporting ARPA-E, saying on his blog earlier this year that "the obscure agency is key to solving our energy problems."

In an interview with E&E News last year, Gates said he was in an "ongoing discussion" with Trump about the need for energy research and development (Greenwire, Dec. 13, 2016).