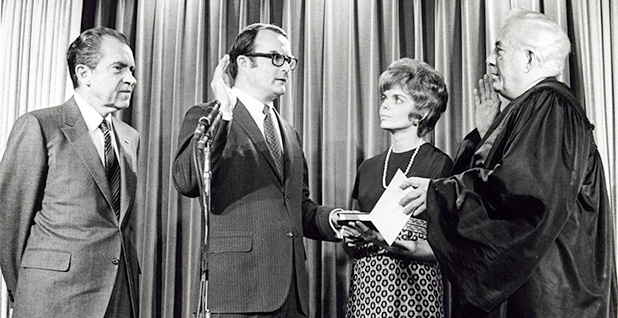 He served as the agency’s first administrator under Nixon and came back for a second tour under Reagan with the hope that he could help refocus an agency that had been rattled by a major Superfund controversy involving top officials in the early 1980s.

I am sort of fixated on this election. It’s hard to ignore it, and it seems to me we have so much at stake in Trump not winning. I have been in politics most of my life, and when I was active in running for various offices, people would say, ‘Boy, so and so is really scary.’ I’d think, ‘I don’t really agree with him, but he’s not scary. I don’t worry about him.’ I must say, I think Trump is scary. I don’t have any idea what he’d do. If I thought he did, I’d feel a little better about it.

For one thing, he’s very thin-skinned, and if he treated foreign leaders the way he treats our own domestic political leaders and got mad at them and called them names and took umbrage at something they’d said, we could find ourselves in a real shooting situation that was caused by virtually nothing. Unlike the first World War, maybe, but not far away.

He’s said he wants to abolish the EPA, and the Republican Party platform would turn it into a bipartisan commission. Could either of those things happen?

So many of those guys have announced that they’re going to abolish the EPA. It’s right up there with the IRS in terms of what gets abolished. I don’t think they will. … Somebody has got to guide the country in keeping people safe, protecting their health, and at the same time not do it in such a way that it causes unnecessary strife in a society. I think there’s some legitimacy to the concern about the way in which we regulate environmental issues, but that doesn’t mean we back away and don’t do it.

If you were asked to be Clinton’s EPA administrator, would you do it?

[Laughs.] You mean, go back a third time? I think having cleaned it up twice, that’s enough. No, I don’t think so. I think you need a very high energy level. … I wouldn’t want to do it again.

My wife asked me that question this morning. I was very clear it was not going to be me. I think that’s what she had in mind, are we going to have to move back to Washington? I think Gina [McCarthy] is doing a good job. Whether she has any interest or the next administration would have any interest, I don’t know. The Trump administration would probably put somebody in there who didn’t believe in it and would try to dismantle the agency just like they did in the Reagan administration, and it wouldn’t work.

In his second term, like most presidents — although this was not true of Nixon — he’s done an admirable job. He took on climate change and, I think, helped move our effort forward to combat the ill effects of carbon-based fuels. He hasn’t had any support from the Congress; that’s been true of so many issues. If you hold him accountable for not getting along better with the Republicans, I find that very hard to do. They’ve stated their mission is to make him look bad and to fail.

The first office was at 20th and L. We then moved up to K Street, of all places. We had a building with an elevator in it; I used to operate the elevator. I found it a good way to meet the employees. They didn’t know who I was. I’d just sit down on one of those stools and move it up and down. … When I started, it was complicated. Letting people off halfway up the floor is not the way to encourage their confidence in their leader. … It was a way to listen. After a while, some of them began to recognize me, but when we started, they didn’t have any idea who I was. I’d find some really interesting comments being made.

I don’t doubt it had a lot to do with who I am. My wife is from there, too. We’ve lived here in Seattle now about 40 years. … When we’d say "home," we still thought of Indiana. I think we now think of home as Seattle, but it took 40 years to root it out of us. Hoosiers are sort of down-to-earth, not necessarily spectacular people, but very solid. That, along with my family, I’m sure had a lot to do with the values I’ve had and what I’ve ended up being.

I used to caddy. And since I caddied for my father, I got to be very skillful at finding balls in the weeds. Then I had a job in the State Department, doing sort of odd jobs; it was a summer job. I was in college. I ran a machine that had formaldehyde in it. It was a copying machine. It’s a wonder I have any nostrils left; it was awful.

When I ran for the Senate in 1968 against Birch Bayh, people had trouble pronouncing our name. … It triggered a big argument. … We didn’t have very much money or much of a campaign. But that was a masterstroke because I heard people as I was driving around the state at various campaign events. I would hear people on these [radio] talk shows talking about the man with the crazy name, how do you pronounce it? So it had the effect of at least getting some voter identification. … Once they decided which was the right way to pronounce it, that didn’t advance our campaign very far.

I have a dog. It’s really my wife’s dog. It’s an Australian shepherd. That dog has no use for me whatsoever. It waits for my wife to show up, and I can walk in the front door and it will be sitting at the bottom of the stairs waiting for her to come. He doesn’t even look up at me. [His name is] Wit. It’s the name of a beer our youngest daughter used to sell in New York. A Belgian beer. It’s no longer sold, but the dog’s name causes the beer to live on.

Oh, boy, what wouldn’t you talk about? I think he’s the most influential person certainly in the 19th century, and maybe the 20th, as well. His book "Origin of the Species" and "The Voyage of the Beagle," they absolutely transformed the way we think about ourselves, the way we think about our religion, our relationship to one another. It’s unbelievable the influence that "Origin of the Species" in particular has had on modern thought.

Yes, I do. I think the crisis that we had was pretty short-lived. … Watergate faded into the background pretty quickly. What’s going on now is much wider in terms of the nature of the problems that we’re dealing with, and we’re not dealing with them.