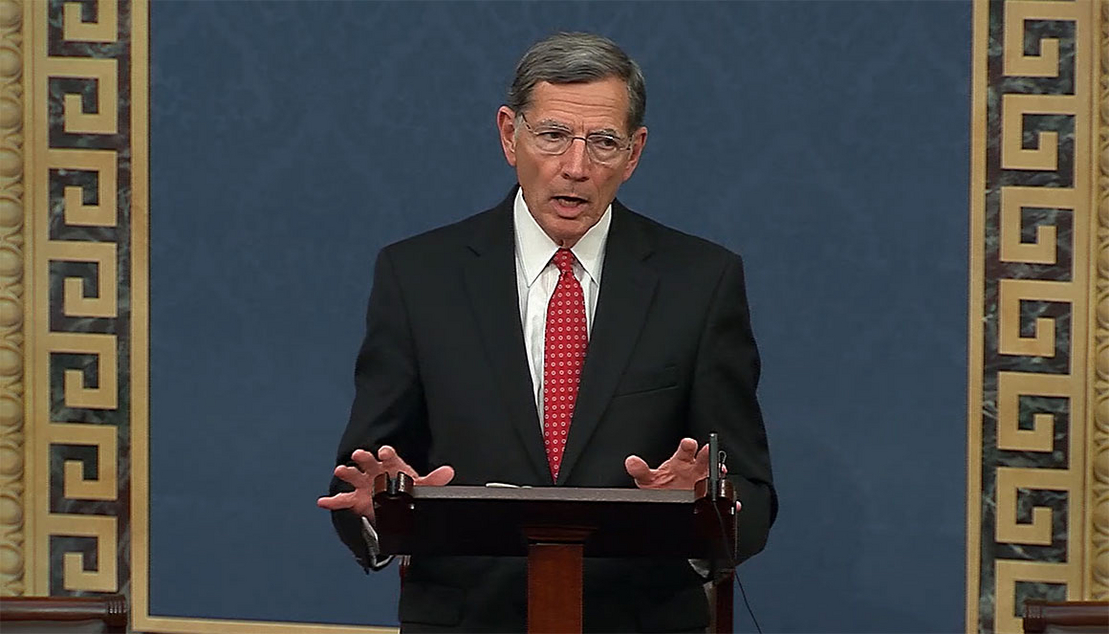 Senators kicked off amendment votes on the bipartisan infrastructure bill last night, but a COVID-19 case is threatening to upend the Senate schedule.

Sen. Lindsey Graham (R-S.C.), who tested positive for COVID-19 yesterday after experiencing mild flu-like symptoms, could scramble the calculus for how the bill proceeds.

Graham, who is fully vaccinated, was at a gathering with several other senators on Sen. Joe Manchin’s (D-W.Va.) houseboat in Washington over the weekend. Graham is one of the members of the bipartisan group that negotiated the infrastructure package.

Despite that news, Manchin, who tested negative, told reporters that he does not foresee the Senate slowing down on the bill. More illnesses, however, could affect the Democrats’ two-track infrastructure plans.

As those questions percolated, the Senate last night rejected an amendment from Sen. John Barrasso (R-Wyo.) on a 45-48 vote that would have prohibited funding for local building code updates that phase out natural gas heating and appliances. It’s an issue that stems from local bans on natural gas around the country — widely opposed by the GOP and industry — in an effort to electrify buildings and address climate change.

“Builders and realtors will tell you that the construction costs go up, and the cost of heating and cooking go up, if you’re not allowed to use natural gas in the construction,” Barrasso said on the floor, citing debates about natural gas bans in towns in Massachusetts.

The bipartisan bill, H.R. 3684, includes provisions that would offer money and technical assistance to states and localities for building and energy efficiency code adoption.

Sen. Jeanne Shaheen (D-N.H.) noted that the National Association of Home Builders and the American Gas Association support the building code language as written. “This provision doesn’t ban, it doesn’t even touch natural gas,” Shaheen said on the floor.

Senators did, however, clear two bipartisan amendments to the bill, one on the telecom workforce and another on the Indian Health Service. Those votes began a process that could see additional action on proposals dealing with climate, energy and chemicals before final passage of the infrastructure bill in the coming days.

The bipartisan deal includes billions of dollars for transit, electric vehicle charging and clean buses, though environmental groups and progressives have said the funding is not sufficient (E&E Daily, July 30).

The package also contains much of the energy bill passed out of the Energy and Natural Resources Committee last month, including nearly $27.7 billion to build out the grid and $27.8 billion for carbon capture, hydrogen and direct air capture efforts.

Notably, however, the final bill dropped the $8 billion 48C tax credit for clean energy manufacturing backed enthusiastically by Manchin, the ENR chair, and a member of the bipartisan negotiating group.

Graham’s positive test has prompted concern that multiple senators might have to move into quarantine and throw off whip counts on the bipartisan bill and on the budget resolution Democrats plan to pass immediately afterward.

Manchin said he tested negative for COVID-19 yesterday, as did several of the other attendees of the gathering. “No,” Manchin told reporters when asked if Graham’s positive test could affect the timing of the bipartisan bill. “We’re good.”

The bipartisan bill got 67 votes in a procedural motion last week. But Democrats will need every member of their caucus to push through the budget resolution, which sets the stage for their $3.5 trillion reconciliation package, in the 50-50 Senate.

Schumer has pushed to move both measures before the Senate leaves for August recess, meaning votes could bleed into next week, when the chamber is scheduled to be out of town. Republicans, however, pushed yesterday for a more deliberative process on amendments to the bipartisan bill.

“This bill should not be rushed though the Senate without providing all members a chance to read it, to understand it and offer their suggestions to improve it,” Sen. John Cornyn (R-Texas) said on the floor.

The Senate will consider additional amendments today, starting with one from Sen. Cynthia Lummis (R-Wyo.) related to highway cost allocations.

Senators had offered dozens of amendments as of last night. Some could end up in the final bill, but the process for which proposals get votes — and when — is still playing out.

Barrasso has proposed several other amendments, including legislation to create a national strategic uranium reserve and to expedite permitting for domestic production of critical minerals.

Sen. Kirsten Gillibrand (D-N.Y.), meanwhile, is pushing for additional provisions on PFAS, the “forever chemicals” that have polluted water around the country. The bill currently would offer $10 billion overall for PFAS cleanup.

One Gillibrand proposal would require EPA to set maximum contaminant levels for PFAS, also known as per- and polyfluoroalkyl substances, while another would direct the agency to set water quality criteria for the chemicals under the Clean Water Act.

Sen. Steve Daines (R-Mont.) also said he would be pushing several conservation-related amendments, as well as a provision to set a minimum number for oil, gas and wind lease sales on federal land.

The question now is how long the process will take, with the vote on the budget looming and senators itching to go home for August.

“The longer it takes to finish the bill, the longer we’ll be here,” Senate Majority Leader Chuck Schumer (D-N.Y.) said on the floor yesterday.