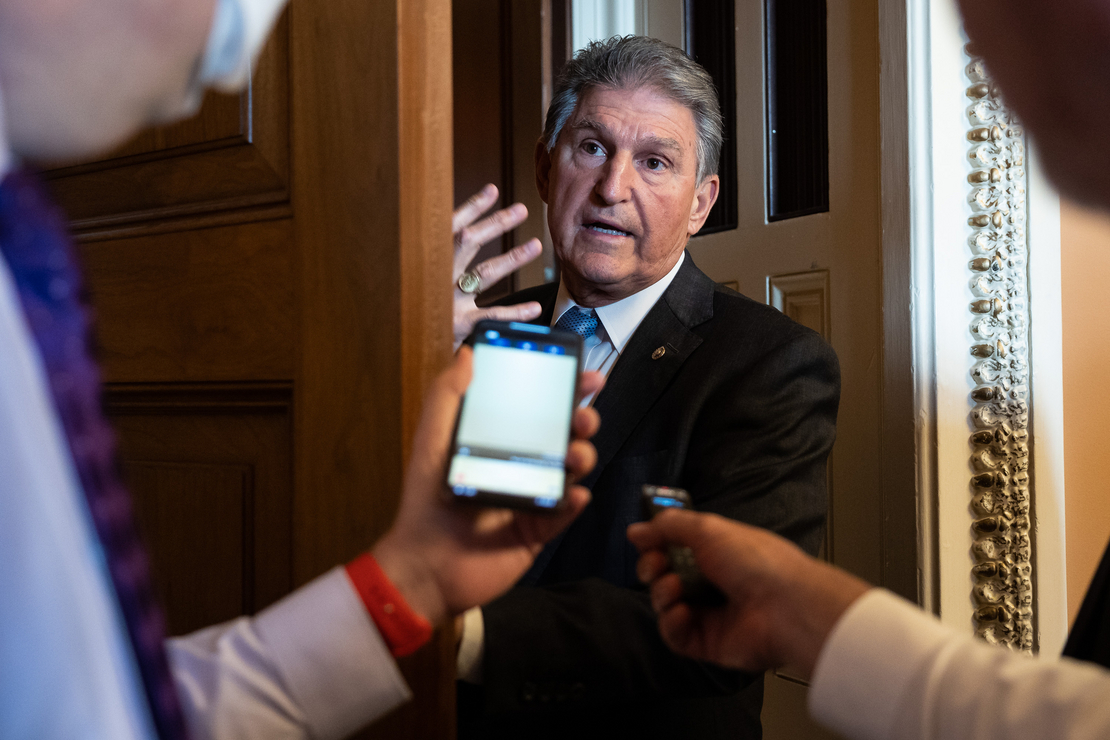 The bipartisan energy and climate gang led by Sen. Joe Manchin (D-W.Va.) broached the topic of clean energy tax credits last night, but they seem far from putting pen to paper to define what a deal might look like.

The group, in its third meeting, went through a list of the energy-related tax credits that have been proposed in the Senate over the last year in the Finance Committee and in Democrats’ $1.7 trillion “Build Back Better Act,” according to multiple senators who were in the meeting.

“I think some progress was made in better understanding what the Finance Committee voted on in the energy tax package that was debated and voted on months ago,” Senate Environment and Public Works Chair Tom Carper (D-Del.) told reporters after the meeting. “It’s hard to wrap everyone’s brain around tax policy that’s that complex and so broad, but I think it’s important to have the conversation.”

It was the group’s third meeting in less than two weeks, but there’s little evidence so far that the senators have a path to a bipartisan deal. On top of energy tax credits, the gang in previous meetings has broadly discussed National Environmental Policy Act permitting reform and a carbon border adjustment (E&E Daily, May 4).

The midterms are fast approaching, however, as are the legislative roadblocks that usually come with them.

Sen. Kevin Cramer (R-N.D.) said the group would need to outline a deal “long before” the July 4th recess. But he said conversations are still in the initial stages and that the group has reached no conclusions on how a bill would take shape.

“It was like what Santa looks at leading up to Christmas,” Cramer said of yesterday’s meeting.

Asked whether an eventual product could get enough Republican support to hit 60 votes in the Senate, Cramer told reporters, “It depends on how long Santa’s list is.”

The House-passed “Build Back Better Act,” Democrats’ climate and social spending bill, was loaded up with $300 billion in clean energy and electric vehicle tax credits that climate advocates were hoping would make major strides in decarbonizing the U.S. economy.

It included revamped credits for renewables, which would have eventually become technology-neutral, and expansions of the electric vehicle tax credit. It also had some GOP-friendly ideas, such as a new production incentive for nuclear energy and a bigger 45Q carbon capture credit.

“We’re just trying to understand what was in the bills before,” Manchin said after the meeting.

“This is a big lift,” he added. “We’re looking at everything.”

The West Virginia Democrat has also expressed some opposition to those proposals in the months since he announced his opposition to “Build Back Better” in December. During a hearing last week, Manchin called EV tax credits “absolutely ludicrous” (Climatewire, April 29).

Cramer has cited the nuclear and carbon capture incentives as ideas he would be interested in. He said the idea would involve taking a handful of previously proposed incentives as part of a potential deal.

“That’s our next step, is to have somebody come in and explain, do an analysis of each one of them — a lot of it’s been done — and then tell us what are the benefits to each one of these,” Cramer said.

‘Our planet on fire’

Democrats have generally been tight-lipped after the Manchin meetings. While they maintain that they aren’t giving up on a Democrat-only budget reconciliation bill, it’s clear they view the meetings as an avenue for the climate policy President Joe Biden ran on in 2020, as well as for legislation to address high energy prices.

“Ultimately, we could have some legislation that deals with our energy needs and climate issues — that’s the goal,” Sen. Mark Kelly (D-Ariz.) said last night.

“We know we have this huge problem with our planet on fire,” Carper told reporters. “We can’t just stop. We did good work in the bipartisan infrastructure — there’s climate stuff there. But there’s a good deal more that we still need to do.”