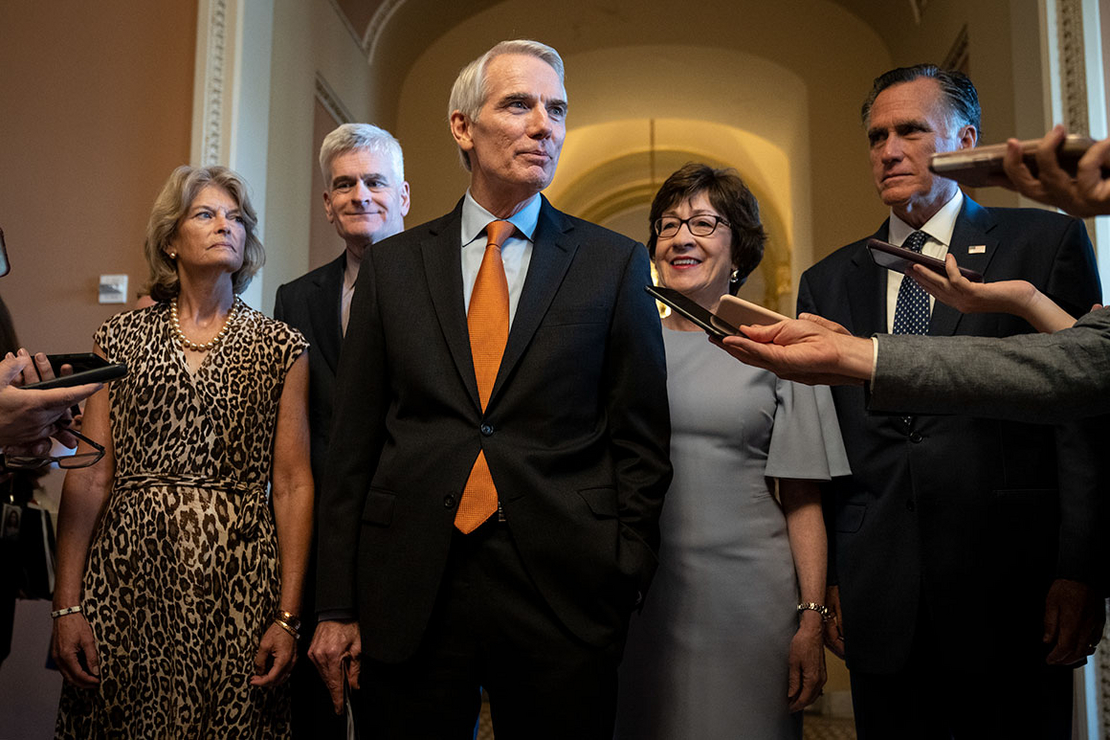 Sen. Rob Portman (R-Ohio) is flanked by a group of Senate Republicans helping negotiate a bipartisan infrastructure package. They spoke with reporters today about progress in getting a deal. Drew Angerer/Getty Images

A bipartisan group of senators negotiating an infrastructure package announced this morning they were nearing a deal, with support of the White House, for hundreds of billions of new dollars for roads, waterways and grid improvements.

Republicans negotiating the deal — including Sens. Rob Portman of Ohio, Lisa Murkowski of Alaska, Susan Collins of Maine, Bill Cassidy of Louisiana and Mitt Romney of Utah — told reporters an agreement had been reached and portions of the legislative text could emerge as soon as this afternoon. “We now have an agreement on major issues,” Portman told reporters.

Senate Majority Leader Chuck Schumer (D-N.Y.) said this morning the chamber could head toward a key procedural vote as soon as later today. “Senators continue to make good progress on both tracks of legislation,” Schumer said. “Members should be prepared to vote again, on cloture, on the motion to proceed to the bipartisan infrastructure bill as early as tonight.”

Republicans blocked Schumer’s push last week to begin formal debate on the bill because too many details were unresolved. And even though negotiators said a deal was at hand, disagreements delayed the process.

Democrats and Republicans have been at odds about transit spending. Another issue has been funding for water projects and replacing lead pipelines around the country (E&E Daily, July 28). How they resolves those issues remains unclear.

Environment and Public Works Chair Tom Carper (D-Del.) did not commit to supporting the measure this morning. Democrats were scheduled to meet this afternoon to discuss the details.

“The Environment and Public Works Committee staff worked into the night with the administration and with the negotiators to make clear our position our preferences on a handful of issues,” Carper told reporters this morning.

The deal stems from a framework between bipartisan Senate members and the White House. It is expected to include elements of the Energy and Natural Resources Committee’s infrastructure package, S. 2377; the Environment and Public Works Committee’s surface transportation reauthorization bill, S. 1953; the Commerce, Science and Transportation panel’s rail and safety bill, S. 2016; and the $35 billion water infrastructure bill, S. 914, which passed the Senate earlier this year.