Bipartisan lands bill might get political, thanks to Trump 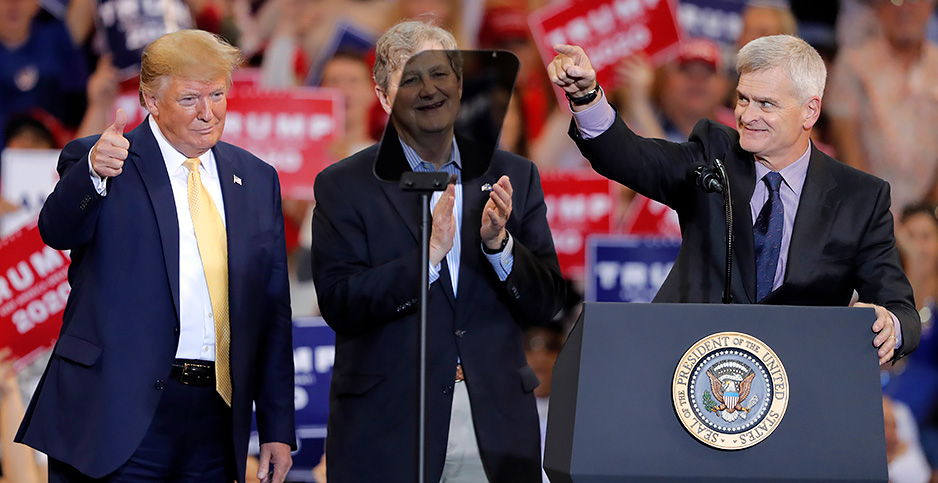 Meanwhile, Senate Democrats are quietly discussing whether to use the same conservation bill as an opportunity to consider new restrictions on U.S. Parks Police after confrontations with protesters outside the White House.

In the days ahead, lawmakers in both parties will have to decide how much politics they are willing to inject into a debate on a bill that has been touted until this point as a true bipartisan effort.

They’ll also have to decide how much they want to make the president part of the conversation.

Senators will vote tonight on a procedural motion to kick off consideration of the "Great American Outdoors Act," S. 3422, a bill that would, for the first time, permanently and fully fund the Land and Water Conservation Fund with $900 million annually.

It also would create a five-year fund to reduce the current $20 billion deferred maintenance backlog at parks and other public lands, including those managed by the Fish and Wildlife Service, Forest Service, Bureau of Land Management and Bureau of Indian Education.

There are currently 58 official co-sponsors — 41 Democrats, two independents who caucus with Democrats and 15 Republicans.

The majority of these sponsors are working hard to whip support for the bill as it currently stands. They are also pushing for a closed amendment process to prevent an ideological free-for-all that could derail the entire package.

The following days will test the resolve of party leaders to keep outside political interests at bay.

The fate of Cassidy’s amendment could determine how hard other members push for their own policy proposals to get consideration during floor debate (E&E Daily, June 4).

From the beginning, the decision by Senate Majority Leader Mitch McConnell (R-Ky.) to bring up the package was based on Trump’s stated commitment that he would sign the measure if it came to his desk.

It’s not clear if Trump will put muscle behind the kind of policy changes Cassidy is proposing. A spokesman for Cassidy would only confirm to E&E News that the two men had spoken about the matter, and that Trump called Cassidy to discuss it — "not the other way around" — with the conversation ending in Trump’s endorsement.

There’s also no indication that Trump would change his mind about supporting the lands bill if Cassidy’s amendment was not adopted.

But if Trump does decide to issue an official position in support of the amendment — even through a tweet — that could force more members to pressure McConnell to allow the amendment to receive a vote.

Cassidy’s amendment would remove the cap on how much money Gulf Coast states are able to collect from energy production off the outer continental shelf and direct that money toward coastal restoration and resiliency initiatives. It also would make additional oil and gas leases eligible for revenue sharing to fund these efforts.

The LWCF is funded through oil and gas leasing revenue, and Gulf state lawmakers have long argued it’s unfair their states should not receive a greater share.

A Cassidy spokesman said the senator’s amendment was designed to bring more votes to the table for the "Great American Outdoors Act" and was in no way designed to derail the underlying bill.

While his proposal could attract more Republican supporters, however, it could chip away at support from Democrats who are largely against expanding oil and gas drilling off the coast.

It also could empower lawmakers from elsewhere in the Senate to force amendments on their priorities.

For the past week, congressional Democrats have taken a series of steps to hold the Interior Department accountable for deploying members of the Park Police to aggressively disperse protestors at Lafayette Square outside the White House who were demonstrating against a rash of white police killings of black Americans, most recently George Floyd in Minnesota.

Lawmakers have sent letters demanding answers and launched committee investigations. There is every indication Democrats will attempt to rein in the agency in the upcoming Interior-Environment appropriations bill later this summer.

But the timing of the "Great American Outdoors Act" — the first bill to come to the floor that has some relation to the Interior Department since the June 1 confrontation — could be a tempting place to start to lay down a marker.

This would alienate Republicans who would perceive it as an attack on law enforcement and the Trump administration that ordered increased police presence for the Black Lives Matter demonstrations.

Several sources familiar with discussions confirmed to E&E News on Friday that Democrats were actively discussing whether they should take advantage of this opportunity but cautioned no decisions have been made.

A Senate Democratic aide added that allowing a vote on Cassidy’s amendment made it much more likely Democrats would try to force an amendment on their own, perhaps barring the Park Police from being able to receive shipments of military equipment. Republican leaders would then have to decide whether the Cassidy amendment was worth it.

Lawmakers and leaders will have to consider these questions in the coming days.

For the time being, supporters of the legislation said that the biggest question mark was whether there would be enough votes on this evening to invoke cloture on the motion to proceed to the underlying bill, which requires 60 votes.

Given the ongoing coronavirus pandemic, attendance in Washington for legislative business has been more sparse, and advocates on and off Capitol Hill spent the weekend making calls to make sure everybody who wants the bill to pass and can show up, shows up.

Even without amendments, lawmakers across the partisan and ideological spectrum have grumbles about the legislation, from those who feel their states get shortchanged to others who have longstanding disagreements with the entire structure of the LWCF.

"My hope is that all member of the U.S. Senate will be back here for votes on Monday," Sen. Lamar Alexander (R-Tenn.), said in a floor speech Thursday. "Some of us have been a little delinquent in our attendance on the Monday votes, but we need 60 votes on Monday to advance the bill."

Alexander said, "I hope we get a big vote and send a strong signal to the American people that we in Congress have heard them and that, even in a time of crisis like this, we can work together and do important work."