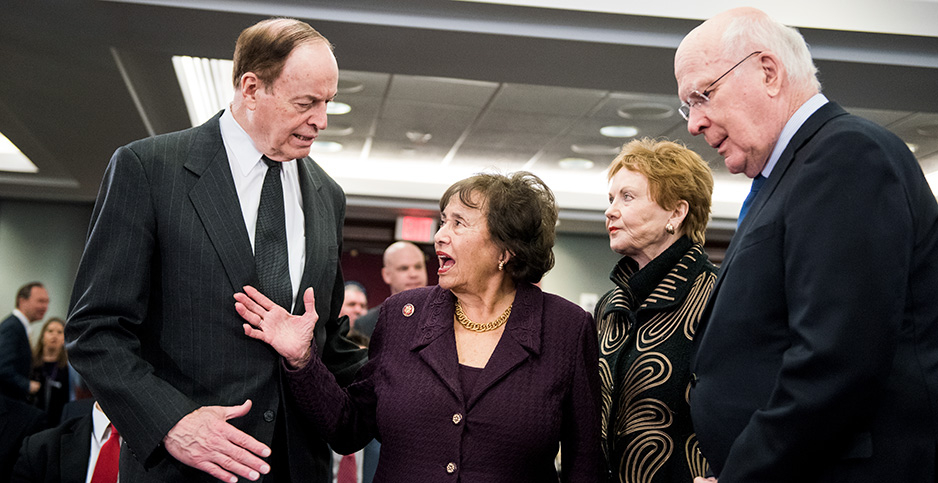 Senior appropriators have had a breakthrough in negotiations over how to divvy up $1.4 trillion among 12 individual spending bills, aides said yesterday.

Now they just have to negotiate the terms: dozens upon dozens of policy riders and disagreements about dollar amounts for countless line items, large and small, from combating the COVID-19 pandemic to renaming military bases currently honoring Confederate soldiers.

They also have to contend with requests and demands from key industries that want to see their priorities included in a final product, such as water and energy infrastructure projects.

Congress has until Dec. 11 to send a bill to President Trump to avert a government shutdown. It also has to be a bill the president will be willing to sign (E&E Daily, Nov. 20).

The stakes are high as the outgoing administration is looking to put its imprint on major consequential policy matters.

Meanwhile, Republicans who control the Senate are anxious that two runoff elections in Georgia on Jan. 5 could hand the majority over to Democrats, which would make this the last funding bill they can dictate for the next two years.

But as lawmakers prepared to at least partly unplug for the Thanksgiving holiday, the good news was that there was now at least a bipartisan, bicameral agreement on top-line numbers for each of the spending measures that will fund federal agencies and government programs for fiscal 2021, a House Democratic aide announced yesterday evening.

Top-line numbers for each of the 12 bills will be kept confidential until formal legislation is released with signoff by appropriators in both parties and chambers, who hope to clear an omnibus spending package that incorporates all the individual funding measures by the Dec. 11 deadline.

If lawmakers cannot reach an agreement by that time, they will likely need to pass a short-term continuing resolution to avoid a government shutdown and allow discussions to continue.

As the dealmaking proceeds, dozens of advocacy groups are clamoring for including more than $11.7 billion for clean water infrastructure that passed the House in July as part of a minibus package (E&E News PM, July 24).

"By boldly investing in water infrastructure, Congress can not only protect our drinking water and public health, both in this time of crisis and beyond, but also spur economic activity and create much needed jobs," wrote the coalition, led by Environment America.

Specifically, the groups want $10.2 billion for EPA’s Clean Water and Drinking Water state revolving funds; more than $1 billion for a program to reduce lead in drinking water, with the elimination of the non-federal cost share for grants that help low-income households; $76 million for a program that addresses lead contamination in school drinking water; $456 million for sewer overflow control grants; and $12.9 million in additional funding for research on per- and polyfluoroalkyl substances, or PFAS.

The coalition also wants language included that specifies any funding for water utilities is contingent on prohibiting water shut-offs for nonpayment during the pandemic.

Separately, the Business Council for Sustainable Energy (BCSE) yesterday outlined a number of clean energy priorities for the lame duck.

In a letter to House and Senate leaders, the group called for a final spending deal to include "robust funding for clean energy research at the Energy Department, as well as support for clean energy programs at the departments of Agriculture, Housing and Urban Development, State, Homeland Security, and EPA."

BCSE is also pressing to see the bipartisan Senate energy package, S. 2657, reconciled with the House-passed clean energy bill, H.R. 4447, enacted as a "foundational set of policies with strong bipartisan support that will spur investment and create jobs."

Additionally, the group is urging a lame-duck deal to extend and overhaul a number of clean energy tax breaks, including expanding eligibility and delaying the phasing down of the renewable and investment tax credits, allowing a direct payment option for both breaks, and reviving and modernizing lapsed energy efficiency incentives.

"Congressional action in these areas will be an important step to modernize U.S. energy policy and help provide much needed relief to stabilize investment and help clean energy industries begin to recover from the impacts of the COVID19 pandemic," wrote BCSE President Lisa Jacobson.