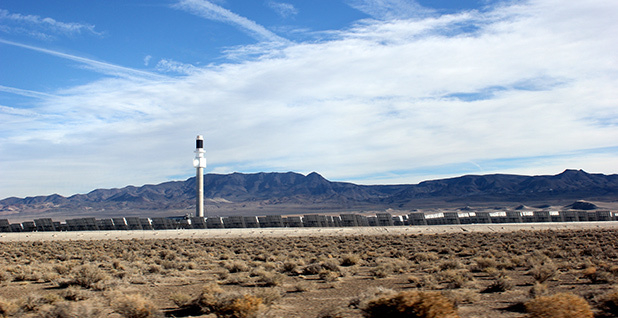 Hundreds of birds have died at a Nevada solar energy plant since early 2015, but the total number of likely bird deaths remains unknown because federal regulators are not requiring the plant’s owners to disclose it.

At least 121 birds have died in the past year at the Crescent Dunes solar power tower facility near Tonopah, Nev., and an additional estimated 130 perished in a span of hours on Jan. 14, 2015, when they flew into the plant’s hot solar flux, according to data, emails and memos obtained from the Bureau of Land Management under the Freedom of Information Act.

That’s just the number of dead birds biologists have seen. The total number is likely much higher, considering the small percentage of the plant that’s been searched and other factors.

BLM, which permitted the project in 2010, said the plant’s operator, SolarReserve, is under no obligation to make estimates of total bird deaths available to the public, though the plant does have to report that information to BLM and state regulators. BLM, which has hired Great Basin Bird Observatory to perform a second set of mortality surveys at the 1,600-acre plant, would not say whether it will make mortality estimates available to the public, either.

To be clear, there’s no reason to believe the Crescent Dunes facility is having a significant impact on local bird populations.

Ivanpah’s effect on birds is considered "low," meaning it’s not expected to diminish local populations, the firm said in a 231-page report filed publicly with the California Energy Commission.

"A good question is, why doesn’t BLM require the same protocol at Crescent Dunes as it does at Ivanpah in order to make a scientifically valid comparison?" said Garry George, the group’s renewable energy director. "BLM has an obligation as a representative of the public to keep the public informed of what’s happening with their rights of way and leases. They should be fully transparent."

Transparency will be key to gaining the public’s trust that the technology is safe.

BLM provided Greenwire a running tally of dead birds found by SolarReserve’s consultant, Stantec Consulting Services Inc., and GBBO biologists at Crescent Dunes — 136 since the data begin in May 2015. While that’s small relative to other forms of human-caused mortality, it lacks important context.

At Ivanpah — which contains three power towers compared to Crescent Dunes’ one — biologists found 1,098 dead and 30 injured birds in their surveys in the year ending October 2015. But because they searched just one-fourth of the heliostat fields and had data on searcher efficiency and carcass removal rates, they determined that more than 5,000 birds had actually likely died at the facility.

GBBO in the past has surveyed about 16 percent of the Crescent Dunes heliostat field that covers most of the 1,600-acre plant’s footprint, according to an excerpt from a GBBO report provided by BLM. It says GBBO plans to perform "replicated detectability trials and scavenger removal trials," which would presumably help it estimate total bird deaths.

Moreover, the Crescent Dunes plant is the first solar power tower in the world to use massive vats of molten salt to store the sun’s heat and produce electricity after dark (Greenwire, March 29). It’s considered a key step to making variable renewable energy a viable alternative to baseload power plants fueled by coal, gas or nuclear.

"I hope your readers don’t lose sight of the fact that our goal is to actually save wildlife and birds by displacing the more harmful sources of electricity," Grikas said.

SolarReserve’s environmental consultants monitor the tower area with high-powered binoculars during operations, she said. On-the-ground searches are performed by four separate groups and have been ongoing since August 2011, she said. Solar flux has been focused on the tower since January 2015, and full electricity production began last fall, she said.

"Bottom line — to date, monitoring by the third-party biologists have reported avian impacts at Crescent Dunes as quite low," Grikas said in an email. "We will continue to rigorously monitor bird mortality, and work closely with all stakeholders. And … it’s important to keep in perspective the more significant risks and impacts to birds from other human and environmental factors — including conventional power projects which are much more harmful to the environment, wildlife, birds — and people!"

SolarReserve’s BLM-approved Avian and Bat Protection Plan requires the company to perform monthly mortality surveys and report results to BLM and the Nevada Department of Wildlife. Stantec is fulfilling those duties.

BLM’s spreadsheet of bird deaths at Crescent Dunes includes data from Stantec and GBBO going back to May 2015.

Commonly found species include mourning doves, common ravens, rock pigeons, horned lark, grebes and swallows. In recent months, there’s been a small uptick in the portion of birds whose deaths were attributed to singeing or burns. A prairie falcon was found last month "burned but not dead," and a raptor was "seen smoking body not found," according to the spreadsheet.

On that day, while the heliostat mirrors were in standby mode, Stantec’s monitoring biologists noticed they were creating a "halo" about 1,200 feet above the ground, according to an email from Josh Vittori of Stantec to Wendy Seley of BLM. They watched birds fly into the halo above the power tower, turn into "white flashes" and leave clouds of smoke, according to the email.

Shortly after the January 2015 solar flux incident, Lynn Alexander, an environmental monitor for the Department of Energy’s loan guarantee program, contacted BLM’s local office to inquire about the deaths, according to a Feb. 25, 2015, email from BLM’s Seley.

"We’ve heard a lot from the project sponsors, but I’d like to hear your take on this (and also what you’ve heard from [the Fish and Wildlife Service] on the issue)," Alexander wrote to BLM officials in a March 2, 2015, email.

Beeler said FWS had shared GBBO’s monitoring proposal with Manuela Huso, a biological statistician for the U.S. Geological Survey whose research on estimating bird mortality was used by contractors for Ivanpah.

"We appreciate BLM’s efforts to ensure the monitoring at Crescent Dunes will result in [statistically] meaningful results," Beeler wrote.