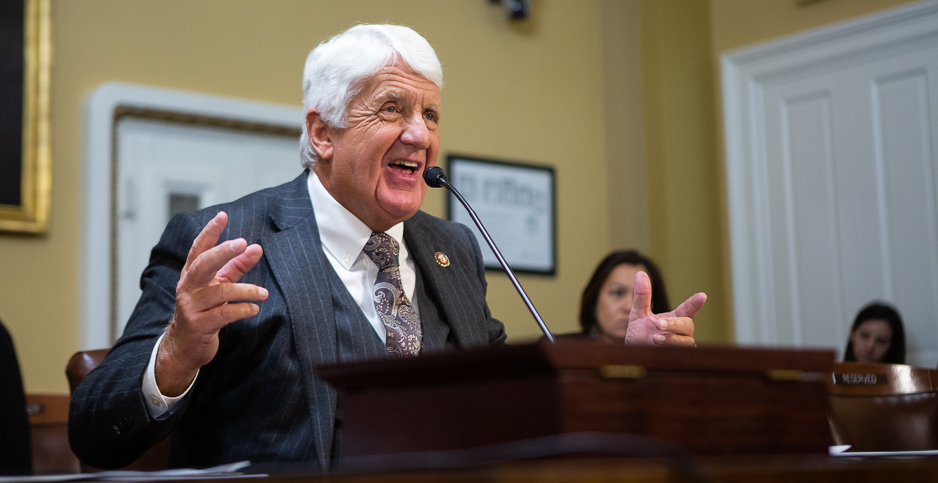 The top Republican on the House Natural Resources Committee is making moves to derail smooth passage of a major public lands package backed by President Trump.

Rep. Rob Bishop of Utah circulated letters to 154 House members today to sound the alarm that their districts could be adversely affected by a little-noticed conforming amendment the Senate adopted in relation to the "Great American Outdoors Act," which the House is poised to clear for the president’s signature later this month (E&E Daily, June 23).

"The insertion of this small but significant change to underlying law … severely disadvantages your state and district," Bishop wrote, calling the legislation as currently written "a wolf in sheep’s clothes."

The "Great American Outdoors Act," or "GAOA," would fully and permanently fund the Land and Water Conservation Fund, which is used to help buy federal land for the purposes of protecting natural resources, endangered species and wildlife.

Under current law, not more than 15% of land purchased through LWCF funds to be added to the National Forest System can come from west of the 100th meridian, which cuts through North Dakota, South Dakota, Nebraska, Kansas, Oklahoma and Texas.

Under the same statute, not more than 85% of land bought with LWCF funds in states east of the 100th meridian can be transferred to the NFS.

But during floor consideration of the version of "GAOA" the Senate passed last month, 73-25, an amendment was adopted that would remove this prohibition (Greenwire, June 17).

Though Bishop supports a portion of the package that would drive down some of the $20 billion backlog of deferred maintenance projects at national parks and public lands, he has made his opposition to the LWCF section well known — a position shared by many other Western state Republicans (E&E News PM, June 18).

Now Bishop is seeking to weaponize the conforming amendment to peel off votes among lawmakers in Eastern states.

Bishop is proposing these colleagues band together to insist on removing the Senate amendment in the House bill.

"This would prevent you from thinking you were supporting a good bill when in fact it would disadvantage your constituents," Bishop explained.

This amendment was not controversial in the Senate, with a Senate staffer familiar with negotiations telling E&E News that the request for its inclusion originated in the White House.

In many ways, it codified what lawmakers have already been doing for years: using the annual appropriations process as the vehicle for approving land transfers to the NFS through LWCF funding.

"The conforming amendment makes no change to the status quo," said Katie Schoettler, a spokeswoman for Sen. Steve Daines (R-Mont.), one of the lead Senate sponsors of the lands package.

"Congress and the agency have consistently approved and funded Western LWCF projects to meet needs and fulfill congressional intent behind the program. Eliminating this arbitrary cap just ensures LWCF is carried out as it always has been."

Lawmakers have traditionally paid so little regard to the 15% rule that a Government Accountability Office study from 2019 found that 80% of new acreage acquired by the NFS between fiscal 2014 and 2019 came from land west of the 100th meridian in violation of the statute (Greenwire, Dec. 19, 2019).

Federal guidance in April stated the Forest Service must begin following the law. Bishop warned in his letter to lawmakers today that if the Senate amendment were enacted, it would "nullify" this guidance.

If Bishop is able to convince enough lawmakers to demand the House amend "GAOA" and then send it back to the Senate without the conforming provision, it may not be a deal breaker.

It would, however, require the Senate to pass the bill a second time, and it’s not likely that Senate Majority Leader Mitch McConnell (R-Ky.) would accommodate another lengthy debate on the measure in a packed legislative calendar.

There are also a handful of Republican senators who adamantly opposed the bill on the first go-round and may not be inclined to let the chamber clear it again using expedited procedures.

Amending the bill in the House would also open up a "Pandora’s box," where allowing a vote on one substantive policy amendment could prompt members to demand votes on other amendments — delaying or obstructing passage because of controversial riders.

In the Senate, leaders were able to stave off a free-wheeling and potentially disruptive amendment process by preventing votes on all rank-and-file proposals, even ones that might have been noncontroversial.

That is, of course, except for the conforming amendment now at the center of controversy in the House.

House Democratic leaders have indicated they plan to take up the Senate bill as passed, also without allowing votes on amendments.