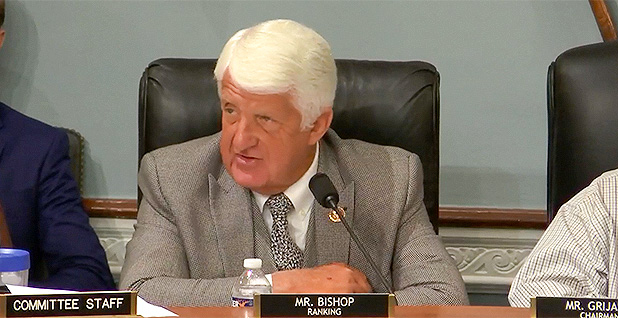 Rep. Rob Bishop says he’ll decide this fall whether to run for Utah governor in 2020 but won’t make any public announcements about it until early next year.

"I don’t think anybody should be running for anything before January," the Republican, who is retiring from Congress at the end of next year, told E&E News last week. "I find it offensive people running so long for offices."

He added: "I’m not going to say anything until January because I have a job."

Bishop said he’s "having conversations with people" about a possible gubernatorial campaign but also has been encouraging a few others to run for the job.

"I haven’t ruled it out for myself yet," the ranking member of the Natural Resources Committee said. "I told them even if I’m asking [them] to run, I may do it myself."

He would not elaborate on which other potential gubernatorial candidates he’s encouraged to run.

Several other Republicans besides Bishop have been mentioned as potential candidates, as well, including former Utah House Speaker Greg Hughes and former Gov. Jon Huntsman Jr.

Bishop is "not gung-ho" about a gubernatorial run and said he won’t do it unless he decides he has something valuable to offer to the state as its chief executive.

Bishop went through a similar decisionmaking process when he mulled whether to run for a 10th congressional term in 2020 or retire from the House.

He announced in July he would retire as planned, in part because of GOP House rules that limit chairs and ranking members to a total of six years in committee leadership (E&E News PM, July 29).

He would hit that limit at the end of this Congress, after serving four years as chairman and two years as the ranking member. Bishop also is a senior member of the Armed Services Committee.

The Utahn acknowledged to E&E News that he’s "not really ready to quit" Congress but believes he is "at the apex of my value to Utah" as a lawmaker.

Asked what he could bring to the Beehive State as governor, Bishop cited his long experience in state politics — he served in the state Legislature from 1979 to 1994, including a stint as speaker — as well as his background as "an old schoolteacher."

Education "dominates most of the discussions" in Utah politics, he said.

"I’ve been thinking about the styles [of governors] that I’ve worked with," said Bishop, adding he views himself in the mold of Norm Bangerter, the late Republican who served as governor from 1985 to 1993.

Bangerter made improving the state’s education system a priority, raising taxes at one point to help pay for school resources. He also built $60 million worth of pumps in the state’s West Desert to deal with flooding from the Great Salt Lake. Like Bishop, he served in state Legislature for years, including as speaker.

"I would really like to coordinate with the Legislature more than has happened since I left," Bishop said.

"I would want to sit down with the leadership to make sure there’s not a legislative approach and an executive approach, but we would coordinate so we have a Republican approach," he said, adding he’d be more "hands-on" than some previous governors.

Still, Bishop said he would "have to talk myself into running for governor" in part because he’s a "horrible" candidate.

"I hate it," he said, referring to campaigns and running for office.

"Putting your ego on the line, worrying about everything," said Bishop, known around Capitol Hill for his three-piece suits, dry humor and snarky style.

"I really don’t have a thick skin, and I do read comment boards," he said. "It bothers me taking crap for things when I still think I’m right. My staff knows for those months before the election, I’m a basket case, and I don’t know if I want to keep doing that."